Explore The DemonWars Saga, One of the Most Underrated Fantasies Ever

This satisfying epic takes place over not just one lifetime, but multiple generations.

With more than 30 million books sold, R.A. Salvatore is without doubt one of the most successful and widely-read fantasy authors of all time.

He's best known for creating the iconic Drizzt Do'Urden, the star of the Forgotten Realms novels, but it was another series called The DemonWars Saga that turned me into a Salvatore fan in the late '90s.

DemonWars is a sprawling epic fantasy with a magic system that Brandon Sanderson fans will love, a huge world, intricate politicking, and characters you quickly fall in love with.

Salvatore recently released the concluding volume in the latest trilogy set in the world, Song of the Risen God, making this the perfect time to explore the series' history. It's also an ideal time for new fans to jump on board with one of the most under-the-radar epic fantasy series out there. 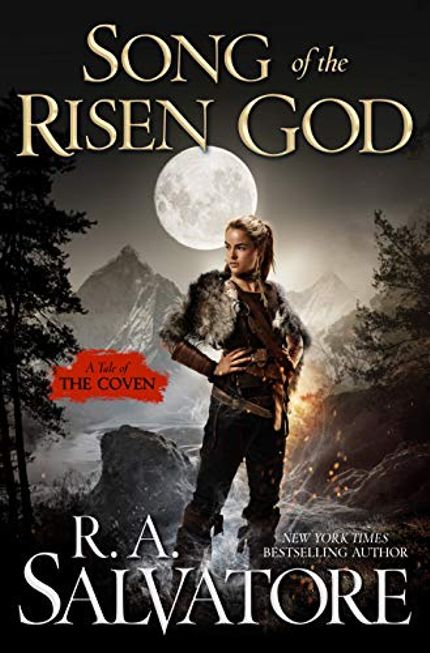 The Start of the Journey

In the mid '90s, Salvatore started writing a new fantasy series for Del Rey. As he told Fantasy Book Critic's David Craddock in 2007, "I got to actually sit down and take all these ideas that had been bouncing around in my head since I'd first decided that I wanted to write a fantasy book, only now, I had the skills to actually do it—I think. And that world, which is my Forgotten Realms, my Middle-earth, my Shannara—that world is Corona."

(A quick note on names: In 2020, the word 'corona' has many unfortunate connotations that Salvatore could never have predicted when he first began conceptualizing and naming his world in the mid-90s.)

What resulted was The DemonWars Saga, which is broken down into several small series, trilogies, and standalone novels, each offering its own entry point into the long-running tale. For the purposes of this piece, I'll be referring to their entirety as The DemonWars Saga.

Now, let's begin where it all began. 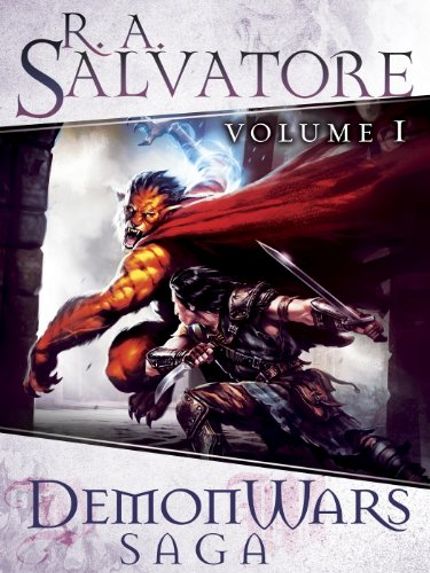 Thirteen years old and hot off a binge read of Terry Brooks' Shannara series, I picked up a copy of The Demon Awakens and immediately fell in love with the book's mature take on epic fantasy.

When the story begins, its protagonists Jilseponie (more commonly called Pony) and Elbryan are children. Over the course of the book, after experiencing a life-altering disaster, we see them grow into adults on separate journeys.

This sort of scope was something I hadn't seen before in a single fantasy book, and it was fascinating. It reminded me of the multi-generational elements of Shannara, but within a single volume.

While Elbryan was everything I wanted from a Dungeons & Dragons character, it was Pony's journey from villager to something far greater that really stood out to me. Her conflicts evolve as the trilogy goes on, and truly define what's wonderful about The DemonWars Saga: It's about real people with real struggles in a fantastical world.

As a long-time fan of Japanese RPGs, I love a good story about a corrupt church, and The DemonWars Saga delivers this in spades. There are so many layers of nuance, and Salvatore does a terrific job of exploring how good people can exist within a corrupt machine.

By mixing philosophical themes about power, corruption, religion, and free will with typical adventurous fantasy tropes and set pieces, Salvatore delivers a heady mix that manages to bring together so many elements of what makes secondary world fantasy so wonderful. 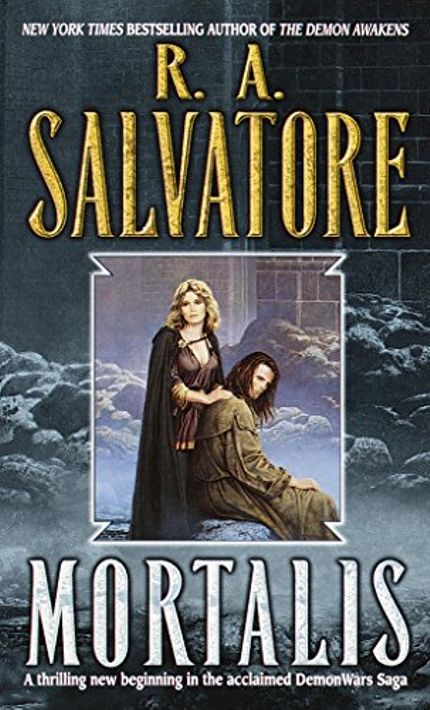 This standalone novel bridges the gap between the first two trilogies and is, in my opinion, Salvatore's best book. Salvatore wrote Mortalis in the wake of his brother's passing, and the result is a raw, intricately personal story about salvation, personal growth, and sacrifice.

While Salvatore is well-known for his intricately blocked fight scenes, perhaps his most impressive skill as a writer is the way he's able to dig deep into the motivations of his villainous characters and reveal layers that make them empathetic, even when we readers want nothing more than to hate them with every fiber of our being.

RELATED: A Fantasy Adventure Awaits in Sword of Bedwyr

Mortalis proves the adage that all good stories are about change. And in DemonWars, the true villains are greed and corruption, fear, desire, and anger. All the characters, no matter where they fall on the spectrum of conflict, succumb to these weaknesses. 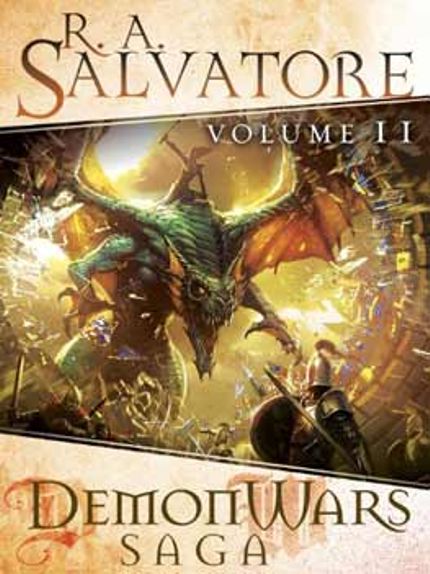 "I built [this world] to last, to give me breathing room," Salvatore told Paul Semel in January when asked what made Corona such a rich world for epic fantasy. "I knew it would grow and that was okay, because there were more undefined regions than those I had already mapped out. It has everything I want in a fantasy world, particularly the magic system."

And what a magic system it is.

Magic wielders are able to call upon the latent magic of gemstones that periodically fall from the sky. Hoarded by the Abellican Church, these stones lend a different power to its user depending on its type—from the soulstone's healing ability to graphite's more aggressive lightning bolts. The further readers get, the more creative and diverse the magic becomes.

RELATED: Sword and Sorcery Films With a Cult Following

The Second DemonWars Saga really showcases the vastness of Salvatore's secondary world. From Behren to the steppes of To-gai, the forests of the Touel'alfar to the iconic monastery of St.-Mere-Abelle, this trilogy spans an enormous world and countless interweaved conflicts that range from sweepingly political to intimately personal.

With this trilogy, Salvatore finally brings to a close many of the long-running storylines that started in the first trilogy, and he does so with immensely satisfying results. His ability to weave multiple, seemingly separate stories across seven novels before pulling them all together into one conclusion is beautiful to behold—and the ultimate payoff for devoting yourself to thousands of pages to get there.

Books: The Highwayman, The Ancient, The Dame, The Bear 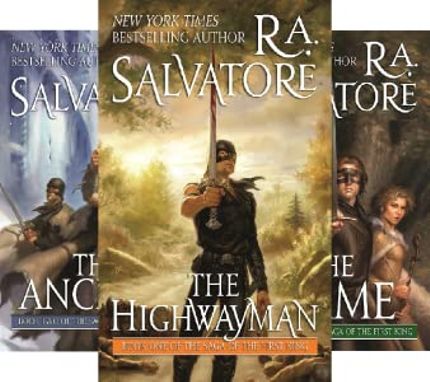 This prequel series begins with a Robin Hood-esque standalone story in The Highwayman.

It tells the story of Bransen Garibond, a young man who suffers a terrible physical affliction, but finds strength and courage in his eponymous alter-ego. After Mortalis, The Highwayman is my favorite book in The DemonWars Saga.

Bran's origin story is full of heart, and Salvatore expertly tackles complex themes of belonging, self-worth, and what it means to sacrifice yourself for your community.

Concluding the Saga of the First King are three more sword and sorcery-style adventures that follow Bran as he makes his way through young Honce-the-Bear and beyond.

Books: Child of a Mad God, Reckoning of Fallen Gods, Song of the Risen God 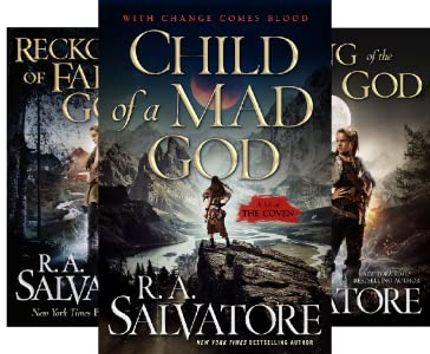 Salvatore's most recent series set in The DemonWars Saga started with 2018's Child of a Mad God. It explores the life of Aoleyn, a young witch-in-training who lives on Fireach Speur among the hardened and patriarchal Usgar people. As Aoleyn grows, her talent with her tribe's magic—known as the Song of Usgar—becomes clear.

But instead of falling in line, Aoleyn has different ideas for her future.

Like the earlier DemonWars books, The Coven trilogy is full of strong women with a lot of agency. They're not just pieces for the plot to move around—they shift mountains themselves, and are generally the books' most complex characters.

A huge theme running through The Coven is the empowerment of women within patriarchal societies. Salvatore says this wasn't inspired by the #MeToo movement, since he wrote Child of a Mad God before it happened, but the timing isn't a coincidence, either.

"And they never got to where they could have gone if they had grown up in a world that treated women as equals to men. So this was the world I grew up in and we were all part of it, and we were all guilty, but that’s the wrong word. It was the culture of the time. We're learning better. And I really wish we would just admit it, and learn better."

The second volume, Reckoning of Fallen Gods, introduces a part of Corona that's entirely brand new to readers. The Xoconai are an Aztec-inspired culture that features some of the most interesting and diverse worldbuilding readers have ever seen from Salvatore.

By the third book, Song of the Risen God, the conflict surrounding Fireach Speur spills over into more familiar regions of Corona, and readers experience a thrilling coming together of many elements that Salvatore has put into place across the series' previous 13 volumes.

Salvatore has cleverly broken this epic saga into several smaller series, each offering a great jumping-on point and a full, satisfying narrative.

The true joy, however, comes from starting right at the very beginning with The Demon Awakens and being right there with Jilseponie and Elbryan, Aydrian, Branson, and Aoelyn as conflict beckons and the world changes several times over.

There's little more satisfying than following a fantasy epic that takes place over not just one lifetime, but multiple generations. Epic doesn't even begin to describe it.