A Thrilling Fantasy Adventure Awaits in R. A. Salvatore’s The Sword of Bedwyr

Read an excerpt from the first novel of the critically-acclaimed Crimson Shadow trilogy.

R. A. Salvatore’s first installment in his New York Times-bestselling The Crimson Shadow trilogy is a masterclass in fantasy writing. Salvatore is perhaps best known for his Drizzt do'Urden novels, which follow the adventures of a morally complex dark elf and are set in the Dungeons & Dragons universe. But The Crimson Shadow saga proves Salvatore's talent for action-packed, can't-put-it-down sword and sorcery isn't confined to the Drizzt books. The Sword of Bedwyr is filled with fleshed-out, lovable characters and exciting battle scenes. As a seasoned writer in the genre Salvatore knows how to captivate his audience, and his storytelling talents are fully on display in this opening title in the Crimson Shadow series.

The novel takes place in the kingdom of Eriador, a country ruled by the tyrannical Wizard-King Greensparrow. Greensparrow is known for his brutality, which is carried out by his oppressive and monstrous forces. But when one of his soldiers crosses paths with a young fighter named Luthien Bedwyr, Greensparrow’s days are numbered.

Luthien never really paid much attention to Greensparrow’s harsh rule. But when one of the wizard’s cyclops soldiers kills Luthien’s best friend, the young man announces his commitment to vengeance in front of an entire crowd. Now a fugitive in the kingdom, Luthien embarks on a quest to avenge his friend by slaying Greensparrow and all of his underlings.

Related: From Dark Elves to Demons: Where to Begin with R.A. Salvatore Books

During his journey, Luthien is accompanied by Oliver deBurrows, an enthusiastic thief who also has his own personal reasons for joining in the fight against Greensparrow. The duo learn that in order to have a shot at killing Greensparrow, they need to obtain two legendary weapons from a dragon’s den: a powerful sword and a red cape that grants invisibility.

In the following excerpt, Luthien battles his rival and best friend Garth Rogar in an arena in front of two noble women and the Viscount Aubrey. The two women cheer on as the warriors hack at each other, their respective fighting capabilities pushed to the limit. In the passage, Luthien’s exceptional sword skills are showcased during the scuffle, as well as his cocky and brash personality. 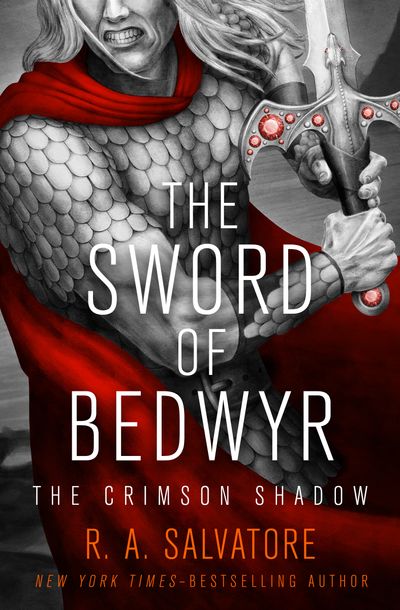 The Sword of Bedwyr

Both women simultaneously cooed when Luthien and Garth Rogar walked out of the tunnel, side by side, wearing little more than sandals, mailed gauntlets, loincloths, and a collar and bandolier device designed to protect their vital areas.

“Is there a bigger man alive?” Elenia gasped, obviously taken with the flaxen-haired barbarian.

“Is there a handsomer man alive?” Avonese retorted, turning her glower on her companion. She noticed Gahris then, took a deep look at him, then turned back to Luthien, intrigued.

“My son,” the eorl proudly explained. “Luthien Bedwyr. And the giant is a Huegoth who floated to our shores as just a boy, as honorable a fighter as any. You will not be disappointed, Viscount.”

It was obvious that Avonese and Elenia were in full agreement with the last statement. They continued to gawk and to toss snide comments back and forth, quickly drawing lines.

“The barbarian will crush him down,” Elenia remarked.

“Those eyes are too wise to be caught in the primitive webs of a savage,” Avonese countered.

She jumped up from her seat suddenly and moved to the rail, throwing out her fine cambric handkerchief.

“Luthien Bedwyr!” she cried. “You fight as my champion. Fight well and you will savor the rewards!”

Gahris looked over to Aubrey, stunned by the woman’s blunt forwardness and fearing that the viscount would be boiling with rage. It seemed to the eorl that Aubrey was more relieved than angry.

Elenia, not to be outdone, quickly rushed to the balcony and threw out her own kerchief, calling for the Huegoth to come and champion her cause.

Luthien and Garth Rogar walked over and took up the offered trophies, each tucking a kerchief into his belt.

RELATED: The Chilling true Story Behind the Pied Piper of Hamelin

“It shall not be so much as soiled,” cocky Luthien said to Avonese.

Luthien quickly caught up to his opponent as Garth Rogar moved back toward the center of the arena, both of them putting on their helmets.

“So the stakes are raised,” the young Bedwyr remarked.

Garth Rogar scoffed at him.

“You should not be thinking of pleasures with a fight before you,” the barbarian said, and as soon as the marshal clapped his hands for the fight to begin, the barbarian charged forward, his long spear thrusting for Luthien’s belly and a quick victory.

Luthien was taken off guard by the bold attack. He fell to the side and rolled away, but still took a stinging nick on the hip. Garth Rogar stepped back and threw up his hands, as if in victory.

“And so it is soiled!” he cried, pointing at Avonese’s kerchief.

Elenia squealed with joy, oblivious to the dart-throwing gaze Avonese had turned on her.

Now Luthien went on the attack, scrambling forward in a crouch so low that he had to use his shield arm as a third support. His sword whipped across at Garth’s legs, but the barbarian hopped back quickly enough. On came Luthien, knowing that if he let up the attack, his opponent, standing high above him, would surely pound him into the dirt.

But Luthien was quick, snapping his sword back and forth repeatedly, keeping Garth Rogar hopping. Finally, the barbarian was forced to stab his spear straight down to intercept a cut that would have cracked his knee. Up came Luthien fiercely, and though he could not realign his sword, he swung hard with his shield, slamming the barbarian in the chest and face.

Garth Rogar staggered backward; lines of blood ran from his nose and one side of his mouth. But he was smiling.

As Luthien took an appropriate bow, the barbarian howled and charged back in. Luthien was ready for the obvious move, though, and his sword flashed across, turning the spear out wide. The cunning Bedwyr rolled in behind the wide-flying weapon, again scoring a hit with his shield—just a glancing blow against Garth Rogar’s powerful chest.

The barbarian countered quickly, though, hooking his free arm around the young fighter and driving his knee hard into Luthien’s thigh. Luthien stumbled past, and Rogar would have had him, except that the young man was quick enough and wise enough to slice across with his sword, nicking his opponent’s knee and stopping the charging giant short.

They squared up again and rushed right back in, fighting for pride and for the love of competition. Sword and spear crossed and parried; Luthien’s shield rushes were countered by Rogar’s punching fist.

Gahris had never seen his son, and especially Garth Rogar, fight better, and he was positively beaming with pride, for both Wilmon and Aubrey were fully entranced by the action, shouting out cheers for every cunning counter or last-second parry. The men could not match the squeals of Avonese and Elenia, though, as each cheered her champion on. These two were not as familiar with fighting styles as the others and many times thought the fight to be at its end, thinking that one or the other had gained an insurmountable advantage.

But these two fighters were well matched and well trained. Always the appropriate defenses were in place, always the men were balanced. Garth Rogar started with a spear thrust, but as Luthien’s sword parried, the barbarian unexpectedly heaved his weapon up high, taking Luthien’s sword with it. Following his own building momentum, Garth lifted a foot for a well-aimed kick, slamming Luthien in the midsection and doubling him over, gasping for breath.

Luthien’s shield came up at the last moment to stop the spear’s butt end, aimed for his head, but he took another kick, this one on the hip, and went scrambling away.

“Oh, good!” cried Elenia, and only then did Gahris notice the scowl Avonese threw the younger woman’s way, and he began to understand that there might be serious trouble brewing.

Sensing the advantage, Garth Rogar roared in, hurling himself at his winded opponent.

Luthien’s shield took the spear up high, Luthien ducking underneath and snapping a quick sword cut into the barbarian’s lead hand. The mailed gauntlet allowed Garth Rogar to keep his fingers, but he howled anyway for the pain and let go with that hand.

Now Luthien pressed forward, keeping his shield in line as he charged so that Garth could not retract his spear for any parries. His sword cut in from the side, pounding hard against the barbarian’s leather bandolier. Garth Rogar winced, but kept his focus, and as Luthien brought the sword back out, then reversed it for a second cut, Garth caught the blade in his mailed fist.

Luthien pressed forward, and Garth got his feet under him enough to press back—just as Luthien had anticipated. Suddenly, the young Bedwyr stopped and backpedaled, and Garth found himself overbalanced. Luthien fell into a backward roll and planted his feet in the barbarian’s belly as Garth tumbled over him.

This thrilling fight is just a taste of what’s to come in The Sword of Bedwyr. R. A. Salvatore’s strong writing shines through in action-filled moments like these. Readers who love tabletop role-playing games like Dungeons & Dragons will be interested to know that Salvatore used gaming as a means of character development when writing The Crimson Shadow series. As he told The Portalist, Salvatore knew he had to add the character of Oliver deBurrows to the series after he played an entire gaming session in-character as Oliver and successfully annoyed and amused his fellow players.

If you’re craving a fantasy fix, look no further than the kingdom of Eriador, where you can join Luthien on his exciting adventure to avenge his friend.