From Dark Elves to Demons: Where to Begin with R.A. Salvatore Books

Overwhelmed by where to start with the many great sagas of R.A. Salvatore? Let us light your way.

If you like long journeys and melancholy poetry about the passing of an age, you go to Tolkien. If you like political intrigue and watching your favorite characters die, you go to George R.R. Martin. If you want vivid battle scenes and classic sword and sorcery, you come to author R.A. Salvatore.

Salvatore made his bones writing stories for the Dungeons & Dragons universe (specifically the Forgotten Realms), but his bibliography has exploded since the release of The Crystal Shard in 1988. He’s written for the original Star Wars Extended Universe (R.I.P.), created his own fantasy setting called Corona, and even published his own fantasy role-playing game, Demon Wars. Along the way, he’s become a New York Times bestseller and a favorite of fantasy fans everywhere.

Salvatore’s body of work includes over 60 titles, but here are some of the best R.A. Salvatore books to dive into first.

If you could boil down the appeal of old-school D&D to a single popular character, it’d be Drizz’t Do’Urden, the Drow Ranger protagonist of the Dark Elf Trilogy. He’s by far Salvatore’s most famous character, and the Dark Elf Trilogy explores his life before appearing in the popular Icewind Dale Series (which actually came out first).

Homeland focuses on Drizz’t’s early life and education in Menzoberranzan, the home of the Drow, where the Spider Goddess Lolth oversees the constant, clandestine wars going on between the ten noble Drow houses. Menzoberranzan’s society is so immersed in lies, assassinations, and betrayals it makes Westeros look like Muppet Babies.

Drizz’t is born into this world of darkness and deceit. Despite being surrounded by greed and murder, Drizz’t develops a strong moral code (thanks in part to his weaponmaster father Zaknafein) and vows to escape the city to find his true calling. Before he can escape, however, he has to survive the brutal Drow martial academy known as the Melee Magthere, where he learns to fight with his signature scimitars. He also must avoid the machinations of his mother, the devious Matriarch of House Do’Urden.

Overall, Homeland has some incredibly imaginative worldbuilding and a pretty compelling central premise: Drizz’t struggling to be a moral person in a society that’s constantly pushing him to be evil. When it comes to fantasy, it’s refreshing to be neck-deep in the world of the “bad guys” for once.

While Homeland focuses on Drizz’t’s coming of age (complete with a good amount of angst and internal monologues), The Crystal Shard focuses more on a group of heroes that includes Drizz’t, the Dwarf Bruenor, the Halfling Regis, and Wulfgar, a young Human barbarian who starts off the book invading the Ten Towns of Icewind Dale, only to find himself defeated and indentured to Bruenor. Over the course of the book, Wulfgar grows up to be quite the anomaly: a barbarian who’s intelligent, strong, and moral.

To be honest, though, the real star of the show is Drizz’t, who is presented as somewhere between Peter Jackson’s Legolas and Vin Diesel’s Riddick in terms of lethality. At this point in Drizz’t’s career, he’s still hated and feared by most people, which makes him all the more brooding and tragic.

The conflict of the book revolves around the eponymous Crystal Shard, a powerful, sentient gem that grants its owner incredible power while simultaneously bending their mind to its will. Ten Towns becomes threatened by the wielder of the Shard, and it’s up to our heroes to defend the people of Icewind Dale.

A lot of Salvatore fans advise starting with The Crystal Shard, partly because you can appreciate how Salvatore’s writing matures over the years.

3. The Saga of the First King series 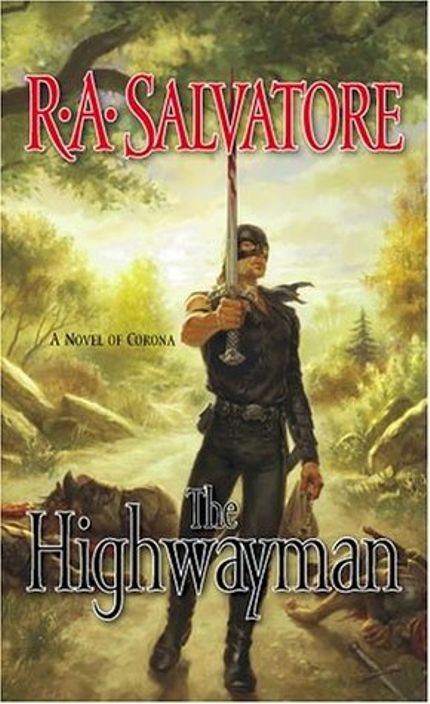 Like other Salvatore titles, the main character of The Highwayman is a nigh-unstoppable, swashbuckling swordsman of incredible power, but there are a few unexpected elements to the book.

The first is that a large part of The Highwayman is spent exploring the religious and political issues of Prydr Hold, the book’s main setting. Second, there’s substantial Eastern influence on the book, including the concept of chi. The protagonist, Bransen Garibond, is initially disabled from birth, and is forced to combine the teachings of both his now-dead parents (a mystic and a priest) to gain the strength to free Pryd Hold and defend the ones he loves.

Bransen is sort of a cross between Drizz’t and Wesley’s black-clad persona from The Princess Bride, but his personal history and mystical source of power set him apart from both. The Highwayman is one of the best intros to Salvatore’s world of Corona, which also includes the DemonWars Saga. 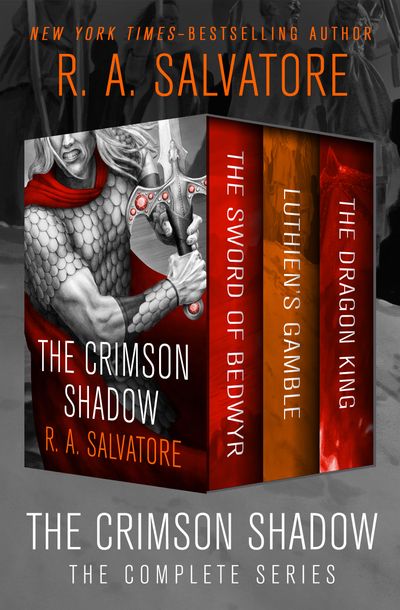 The Crimson Shadow series combines two of the most popular archetypes in the swashbuckler genre: Robin Hood and The Scarlet Pimpernel. It’s got plenty of adventure, treasure, and epic battles, but unlike a lot of Errol Flynn shenanigans, the story leads to much bigger stakes.

Like Homeland, Luthien Bedwyr is a hero bred to fight, but he ends up veering more on the side of thievery when he meets Oliver deBurrows, a Halfling thief. After meeting an ancient wizard, braving a dragon’s den, and obtaining a legendary cloak of invisibility called the Crimson Shadow (known as such because it casts a red shadow), the two start to strike back against the henchmen of the wizard Greensparrow, who holds the land in his despotic grip.

Soon, the pair find themselves at the forefront of a rebellion, spurred on by the legacy of the previous wielder of the Crimson Shadow, who struck back against the rich and powerful. One of the highlights of the series is Oliver, whose humor and wit have made him beloved among Salvatore’s fans. 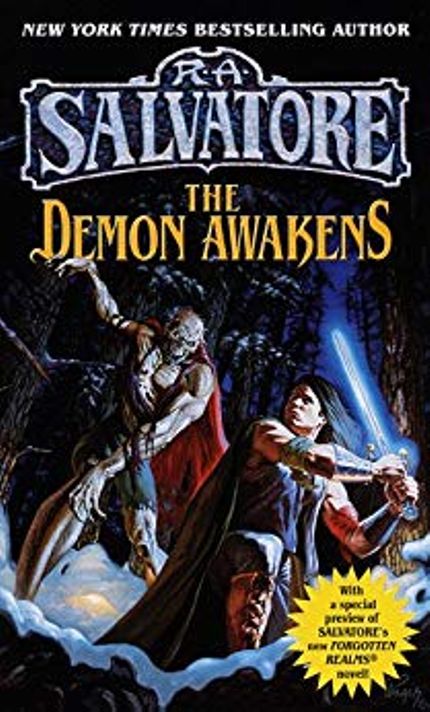 The Demon Awakens is a departure from other Salvatore books that focus on a single, sword-wielding hero. Instead of one protagonist, we have three of them spread across the realm of Corona, each with their own story: the Ranger Elbryan Wyndon, also known as Nightbird, is struggling to protect the people of his hometown of Dundalis; Jilseponie Ault is undergoing a transformation from barmaid to warrior; and Avelyn Desbris is a young monk on a mission to collect powerful gemstones that his order claims are gifts from God. Ultimately, all are united by the rise of the demon Bestesbulzibar, who threatens the land with an army of monsters.

The Demon Awakens includes more character development than some of Salvatore’s other works, as well as an exploration of the nature of faith and religion. Salvatore’s hallmarks, however, are all here: vivid battle scenes, well-placed comic relief, and a band of heroes fighting against evil.