Are Dragons Real? A Scientific Exploration

No mythological creature is more varied than the dragon. From the compound-eyed, alien dragons of Anne McCaffery's Pern series to the chronically ill swamp dragons of Terry Pratchett's Discworld, dragons have been invented and reinvented countless times in popular fiction. It’s almost impossible to pin down traits that every fictional dragon shares with others—just look at the diversity of form that exists in the How to Train Your Dragon movies alone.

But do any of these dragons have real-life counterparts in the animal kingdom? Dragons may not exist exactly as we know them from shows like Game of Thrones, but have any non-fictional creatures ever demonstrated distinctly draconic features?

Between Western and Eastern dragons, there are innumerable interpretations. To see how real-world creatures stack up next to fantasy's most beloved beast, I'm going to limit my analysis to three traits that most Western dragons share.

Western dragons are most prevalent in North American fiction; when you shut your eyes and picture a dragon, the creature in your mind’s eye is probably huge, with wings and a propensity to breathe fire. I'll also be taking into account both extinct and extant non-fictional creatures to see whether dragons are, or at least were, real—in a way.

The dragons in fantasy are almost always depicted as reptiles, or at least reptilian, with scaly skin, horns, claws, and an egg-laying lifestyle. However, no living reptile reaches the gargantuan sizes that dragons typically do in fiction.

Despite their draconic name, komodo dragons, the largest living lizard species, typically 'only' grow up to 150 pounds. The largest living reptile, the saltwater crocodile, can grow to a respectable length of 20 feet and a weight of 2,000 pounds—still no match for the immensity of The Hobbit's Smaug.

We have to look to the past to find creatures that really reach draconic proportions: the dinosaurs. Dinosaurs are one of the few non-fictional beasts truly comparable to dragons, because they grew so inconceivably large.

The largest of the dinosaurs, the Titanosaurs, may have grown to lengths exceeding 130 feet, and weighed up to 90 metric tons. That’s longer than four school buses lined up end to end, and twelve times heavier than the heaviest living land animal, the elephant.

Of course, one couldn't just slap some wings on a titanosaur and call it a dragon. Animals that grow to massive sizes face important trade-offs. Mainly, the bigger you are, the more food you need.

Not only that, but the bigger you are, the more energy it takes to move the sheer mass of yourself from place to place. Unlike speedy flying dragons, titanosaurs probably did not top three miles per hour walking all that bulk around. So even though animals of draconic size once existed, it's highly unlikely they even approached the speed of the dragons we know and love in fiction.

Want more dragon stories? Sign up for our newsletter and get our recommended fantasy reads sent straight to your inbox!

In most dragon-centered fiction, dragons are able to fly. But in reality, flying is extraordinarily difficult, and the bigger an animal is, the more difficult flying becomes.

Take, for example, one of the largest animals ever to fly: the pterosaur Quetzalcoatlus. Standing as tall as a giraffe on all fours, this sky terror had a 35-foot wingspan, and could probably fly up to 80 miles an hour.

As with the Titanosaurs, however, there were important trade-offs to being so big. Like modern birds, Quetzalcoatlus had a lightweight beak instead of teeth, and utilized a system of air sacs within their bones and wing membranes. Most of the body was trimmed down for maximum aerodynamic efficiency, leaving Quetzalcoatlus looking less like a dragon and more like a giant, hairy stork with no tail.

Generally, dragons are depicted with fearsome teeth, long tails, and an assortment of bristling horns, which would all make them quite heavy in the air. To add even more weight, most fantasy dragons also have a third pair of limbs on their backs to serve as wings.

It all adds up, and in reality, it would leave any creature—even with the best assortment of air sacs and hollow bones—struggling to get off the ground, let alone achieve true powered flight.

There aren't any animals today of draconic size that can fly, and few animals of that size that have ever been able to fly and look cool at the same time. (Sorry, Quetzalcoatlus–you looked something, but I’m not sure the word for it is ‘cool.’) So, if dragons as we know them from fiction were to suddenly become real, how would they get airborne?

Here we may have to turn away from the world of biology and learn a little more about technology. The largest flying animal probably didn’t exceed 500 pounds, if that; however, one of the largest flying things, the Boeing 747, can weigh up to 485 tons. That’s five times as much as a Titanosaur! So how do such heavy planes manage to fly?

In theory, anything with the right wing shape can achieve lift: it just needs enough thrust to get up in the air, which can be hard to do as things get heavier. Planes achieve this with combustion engines, which provide enough force to lift the plane into the air.

Now, I am not suggesting our hypothetical dragon could achieve flight by attaching engines to themselves (though that would be pretty awesome/terrifying). But the topic of combustion is a good segue into our next dragon-like animal.

Fire breath is likely the most magical aspect of the dragon, one that truly sets it apart as a fantastical creature: real animals may grow scaly and huge, and they may fly, but none are known to spit flames.

Considering the range of dangerous substances animals have evolved to harness—acid in our stomachs, venom in the fangs of snakes, cyanide in the tissue of a cassava plant—it’s almost surprising that none have ever used fire as a biological weapon. But there are animals who’ve evolved to use combustion for self-defense.

The most famous is the bombardier beetle. These hot little bugs mix hydrogen peroxide and hydroquinone in special insulated chambers inside their abdomens. The chemical reaction releases so much heat that the liquid nearly reaches the boiling point, and a series of tiny explosions—yes, actual explosions—sends noxious, hot liquid spraying out of the beetle’s abdomen.

RELATED: The 10 Best Fantasy TV Shows for When You Need to Escape Reality

If a beetle can evolve chambers designed to contain explosions, it’s not too much of a stretch to reason that our imaginary dragon, perhaps utilizing the system of air sacs discussed before, might be able to store flammable liquid or gas in glands around their mouth, and combust them into fire for defense.

Combustion might also help our dragon get airborne. In series’ like Naomi Novik’s Temeraire, dragons have air sacs filled with lighter-than-air gas, allowing such behemoths to circumvent the weight issue by bobbing up like helium balloons.

The ability to use chemical combustion could also theoretically heat the air inside and outside the dragon. Hot air balloons rise by the same principal, as heated air rises over cold air. Of course, the dragon would need to have specialized internal mechanisms to survive such heat!

Ultimately, dragons will only ever exist in the realm of fantasy, their abilities and prowess limited by our imaginations, not biological reality. So how did dragon lore become a staple across so many cultures?

RELATED: 9 Books by George R.R. Martin that Aren’t A Song of Ice and Fire

In an age where all the information we could ever want is at our fingertips, one Google away, it’s easy to debunk dragon myths. However, the belief in dragons stretches beyond record—they were depicted in ancient Greece, but their exact origins are impossible to pinpoint. In the age of antiquity, information on history and the natural world wasn’t quite so readily available.

Dragon legends began much like the legends of Grecian gods and goddesses—a justification for the missing links within peoples’ understanding of the world. As brave sea-farers of the classic era returned home with terrifying tales of vicious beasts—likely to be monitor lizards, in actuality—they didn't have polaroids to whip out an corroborate their accounts.

Around the same time, they began to unearth giant, sharp-toothed fossils—remnants from things like the aforementioned titanosaur. As they didn’t have the context of carbon-dated dinosaurs, they thought the fossils were proof of the existence of the beasts across the sea.

Much like the spread of belief in vampirism that came with the Middle Ages, dragon lore took on a life of its own. Similar to an extreme game of telephone, dragons began to adapt traits that reflected the fears and whims of whoever was telling the story.

In some cases, dragons were benevolent protectors of fortunes, while in other instances they were great monsters to be defeated by a noble hero. As mercurial as the gods, dragons could be whatever they needed to be to suit the imaginations of the Grecians.

As Christianity swept the world, dragons took on a hellacious reputation—quite literally. Numerous passages within the Bible refer to dragons—either through description or by name, depending on the translation—and by the Middle Ages the beasts were well known as representations of Satan.

The Christian church cultivated religious legends of saints—like the acclaimed Saint George the Dragon Slayer— who battled these fearsome creatures with mouths which burned like the gates of Hell. And so, just like that, dragons became the ultimate foes to heroes across stories—an antagonist meant to measure the moral worth of their opposers.

Still craving that extra bit of dragon heritage? For an in-depth, evolutionary take on the origin of dragons, the book An Instinct for Dragons by anthropologist David E. Jones offers an interesting and refreshing insight.

Using an approach which combines elements of psychology, anthropology, and biology, Jones questions how the depictions of dragons could be so similar across diverse cultures from Africa to America.

The basis of Jones’s theory is that the universality of dragons comes from the natural evolutionary process. At the start of mankind’s journey on earth, humans faced three primary predators: raptors, snakes, and large cats.

Jones hypothesizes that, on instinct, our primate ancestors embodied the threats of their predators into one hulking terror. He dives much farther into detail in his novel—describing how his theories originated from the witnessed behavior of vervet monkeys—encompassing socio-economic factors as well.

For those interested in the progression of dragon lore over time, Dragons and Dragon Lore: Cryptozoology and Mythology by Ernest Ingersoll is a fascinating read. This collection of primary source material touches on the stories from the East and the West, from the Christian tales of Saint George to Hindu nagas.

Most importantly, Ingersoll’s work operates within the context that at the time these stories were so popular they were not merely folklore, but very real studies and beliefs in the eyes of the storytellers. 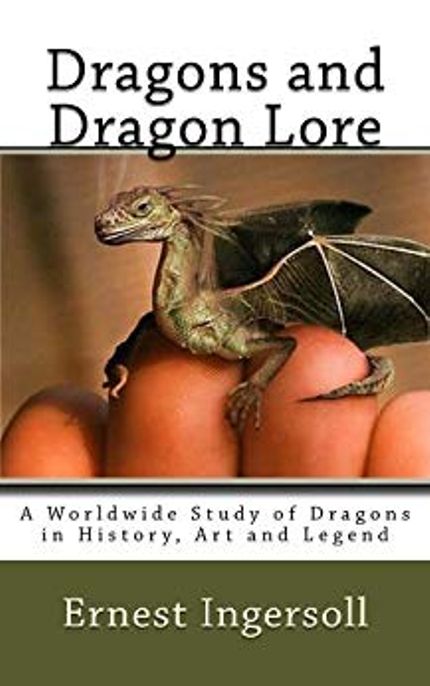 After all is said and done, we can definitively say that, sadly, there is no proof that dragons are real. Ultimately, dragons were never more than a phenomenon of a collective psyche. But knowing a little about real animals who share some of their traits can help us gain a better appreciation for the strange, diverse natural world around us. The study of dragons also brings a heightened appreciation for humanity and how similar we all are in what fascinates and frightens us.

Want more dragon stories? Sign up for The Portalist's newsletter!