An A.I. Revolution Transforms America in This Excerpt From the Techno-Thriller Burn-In

Get a sneak peek at this new hard sci-fi novel by renowned futurists.

Advanced A.I. and robotics have transformed the country, but not everyone is thrilled with this accomplishment, and America teeters on the brink of both a political and technological revolution.

FBI Special Agent Lara Keegan is on assignment to field-test a new high-tech police robot, TAMS. In the below excerpt, the controversial human-robot team stumbles into a messy situation in a local restaurant. 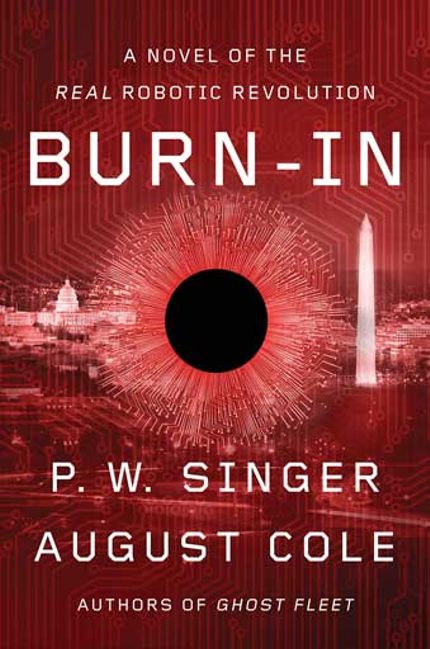 “I have been instructed to provide you payment,” said TAMS. The robot held the two $40 bills between its thumb and trigger finger. The man behind the counter glared back at the robot standing before him, TAMS’s head barely topping the counter.

“What?” the man said. He was wearing the yellow “Ben’s” T-shirt worn by the restaurant staff, but it was a tight fit.

Its legs telescoping, TAMS boosted its height by over a foot to look the man nearly in the eyes. “I have been instructed to provide you payment,” the machine said.

RELATED: How Isaac Asimov’s I, Robot Prepares Us for a Future Controlled by AI

“I know that. Don’t you have a credit number to just bill to or something?” he asked.

“It is legal tender for the goods and services you have provided,” the machine said, ignoring his query. The robot stood silent as the man scowled in exasperation.

The robot dropped the bills. As the bills fluttered down, they missed the countertop and fell to the floor in front of TAMS — just as Keegan had instructed.

The man looked at the robot in anger. “Stupid machine, pick them up.”

The man grunted in frustration and leaned over the counter, his fingers stretching out to reach the bills on the floor, one leg extended up.

RELATED: 12 Books About Robots Taking Over

Seeing her opening, Keegan leapt up from the corner table. By the time the man looked up, she was already on him. She was smaller, so she used physics to her advantage. She grabbed the man by the collar and yanked him toward her, his body sliding over the slick countertop. When his center of mass shifted over the edge, he tumbled to the ground. Before the man could get up, Keegan placed her shin over his throat, using her focused body weight to pin him.

Want more sci-fi thrillers? Sign up to get the best in sci-fi and fantasy sent straight to your inbox!

The bot began pushing additional information onto her vizglasses. Unlike in the Kill House, the walls were too thick to determine the exact outline of whoever was back there. The glasses also noted the DC Metro Police’s ETA, a clock ticking down the arrival of a patrol car projected to be assigned the call to investigate.

“TAMS, hold this guy until police arrive,” said Keegan. Pulling the dazed man up, she reached over to grab TAMS’s hands and placed them over the man’s wrists. “And read him his rights.”

As the suspect looked confusedly on, the robot held him in place with its locked fingers as makeshift handcuffs. Then, with a vocal tone taken from an amalgam of the recordings of Supreme Court hearings, it began its lecture. “Mr. Andrew Kerinsky, as you are presently detained by a representative of law enforcement, as determined by the 1966 Miranda v. Arizona Supreme Court decision, you have a right to…”

Keegan stopped listening to the robot as she moved back over the counter and snuck a quick glance around the corner, into the kitchen area. No one. She moved on to the doorway to the storage area and peeked around the edge. The waitress and a cook were kneeling on the floor, eyes fearful. An elderly man in a suit was laid out beside them, a trickle of blood coming from a gash above his eyebrow. Keegan had been to Ben’s enough times to recognize Sage Ali, the son of the legendary founder. And behind them, crouched behind a stack of hot dog buns, was a young man with a shaved head wreathed in a barbed wire crown tattoo. In his hand, he held a blue eight-shot revolver, the kind fabbed by 3-D printers in garage gun shops.

At the snap of a round hitting the wall inches in front of her, Keegan jerked back behind the doorway. A second bullet went through the doorway and hit the wall at the other end of the diner behind her, glass spraying from an actor’s photograph. Keegan looked back over at TAMS. As the robber now writhed to try to get down to cover, the robot ignored the gunfire, prioritizing Keegan’s last order to it. It was now reading out loud a clip from the Wikipedia summary of the 2010 Berghuis v. Thompkins Supreme Court case, which amended the suspect’s right to silence only if they explicitly verbalized their right to silence.

Changing her position lower to spoil the shaved-head shooter’s last aim point, Keegan peeked around the corner again, but he was already gone.

She knew she could hang back and wait for DC police ... But you don’t shoot at a federal agent and just get to run away.

The waitress pointed down the hallway, to the exit door. Stepping into the alley off U Street, Keegan squinted to see if the man had gone left or right. The clang of banging iron caused her to look up. Shaved Head’s escape had taken him to the roof of the six-floor luxury condominium behind the restaurant, as she could tell from his red running shoes disappearing over the edge. Keegan ran toward the exterior stairway, when the man reappeared, pointing his pistol down at her.

Shit. Keegan unconsciously shifted her weight to the balls of her feet and felt her stomach knot, her body waiting for the shot to hit.

When a chain of unusual crises unfolds around Keegan and TAMS, the partners realize they've stumbled into a dangerous national conspiracy.

Harnessing top of the line technology, techno-terrorists plot to rip America apart at the seams — and the human-robot pairing is all that stands between these new threats and utter chaos.

Burn-In is gripping in part because it's firmly grounded in science and the authors' real-life experiences as international security experts. August Cole is a security consultant and respected futurist, and Dr. P.W. Singer was called “the premier futurist in the national-security environment" by The Wall Street Journal.

The result is a near-future vision that World War Z author Max Brooks calls a "seamless blend of detailed research and rapid-fire storytelling," one that shines a revealing light on both our future, and our present.

Want more great reads? Sign up to get the best in sci-fi and fantasy sent straight to your inbox.

This post is sponsored by Houghton Mifflin Harcourt. Thank you for supporting our partners, who make it possible for The Portalist to celebrate the sci-fi and fantasy stories you love.