Extraterrestrial 'Overlords' create a utopia. But at what cost?

In 1953, Arthur C. Clarke published his alien invasion classic Childhood's End. The novel begins in the heat of the space race, as Soviet forces realize they've lost their competition for the stars—not to the Americans, but to alien visitors.

These extraterrestrial Overlords, led by 'Earth Supervisor' Karellen, usher humanity into an era of peace and prosperity. But what exactly are these alien stewards? And what will humanity sacrifice in the Overlords' push for perfection?

Read on for an excerpt from Childhood's End, then download the book! 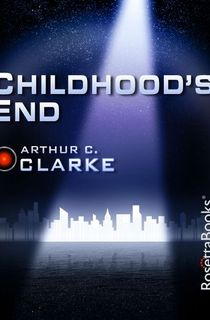 The stars were all around him as Reinhold descended the little hill. Out at sea, the “Forrestal” was still sweeping the water with her fingers of light, while further along the beach the scaffolding round the “Columbus” had transformed itself into an illuminated Christmas tree. Only the projecting prow of the ship lay like a dark shadow across the stars.

A radio was blaring dance music from the living quarters, and unconsciously Reinhold’s feet accelerated to the rhythm. He had almost reached the narrow road along the edge of the sands when some premonition, some half-glimpsed movement, made him stop. Puzzled, he glanced from land to sea and back again: it was some little time before he thought of looking at the sky.

Then Reinhold Hoffmann knew, as did Konrad Schneider at this same moment, that he had lost his race. And he knew that he had lost it, not by the few weeks or months that he had feared, but by millennia. The huge and silent shadows driving across the stars, more miles above his head than he dared to guess, were as far beyond his little “Columbus” as it surpassed the log canoes of paleolithic man. For a moment that seemed to last forever, Reinhold watched, as all the world was watching, while the great ships descended in their overwhelming majesty—until at last he could hear the faint scream of their passage through the thin air of the stratosphere.

He felt no regrets as the work of a lifetime was swept away. He had labored to take man to the stars, and, in the moment of success, the stars—the aloof, indifferent stars—had come to him. This was the moment when history held its breath, and the present sheared asunder from the past as an iceberg splits from its frozen, parent cliffs, and goes sailing out to sea in lonely pride. All that the past ages had achieved was as nothing now: only one thought echoed and re-echoed through Reinhold’s brain:

The human race was no longer alone.

Want more Clarke? Sign up to get the best in SFF sent straight to your inbox!

The Secretary-General of the United Nations stood motionless by the great window, staring down at the crawling traffic on 43rd Street. He sometimes wondered if it was a good thing for any man to work at such an altitude above his fellow humans. Detachment was all very well, but it could change so easily to indifference. Or was he merely trying to rationalize his dislike of skyscrapers, still unabated after twenty years in New York?

He heard the door open behind him, but did not turn his head as Pieter Van Ryberg came into the room. There was the inevitable pause as Pieter looked disapprovingly at the thermostat, for it was a standing joke that the Secretary-General liked living in an icebox. Stormgren waited until his assistant joined him at the window, then tore his gaze away from the familiar yet always fascinating panorama below.

“They’re late,” he said. “Wainwright should have been here five minutes ago.”

“I’ve just heard from the police. He’s got quite a procession with him, and it’s snarled up the traffic. He should be here any moment now.”

Van Ryberg paused, then added abruptly, “Are you still sure it’s a good idea to see him?”

“I’m afraid it’s a little late to back out of it now. After all, I’ve agreed—though as you know it was never my idea in the first place.”

Stormgren had walked to his desk and was fidgeting with his famous uranium paperweight. He was not nervous—merely undecided. He was also glad that Wainwright was late, for that would give him a slight moral advantage when the interview opened. Such trivialities played a greater part in human affairs than anyone who set much store on logic and reason might wish.

“Here they are!” said Van Ryberg suddenly, pressing his face against the window. “They’re coming along the Avenue—a good three thousand, I’d say.”

Stormgren picked up his notebook and rejoined his assistant. Half a mile away, a small but determined crowd was moving slowly toward the Secretariat Building. It carried banners that were indecipherable at this distance, but Stormgren knew their message well enough “Presently he could hear, rising above the sound of the traffic, the ominous rhythm of chanting voices. He felt a sudden wave of disgust sweep over him. Surely the world had had enough of marching mobs and angry slogans!

The crowd had now come abreast of the building; it must know that he was watching, for here and there fists were being shaken, rather self-consciously, in the air. They were not defying him, though the gesture was doubtless meant for Stormgren to see. As pygmies may threaten a giant, so those angry fists were directed against the sky fifty kilometers above his head—against the gleaming silver cloud that was the flagship of the Overlord fleet.

And very probably, thought Stormgren, Karellen was watching the whole thing and enjoying himself hugely, for this meeting would never have taken place except at the Supervisor’s instigation.

This was the first time that Stormgren had ever met the head of the Freedom League. He had ceased to wonder if the action was wise, for Karellen’s plans were often too subtle for merely human understanding. At the worst, Stormgren did not see that any positive harm could be done. If he had “efused to see Wainwright, the league would have used the fact as ammunition against him.

Alexander Wainwright was a tall, handsome man in his late forties. He was, Stormgren knew, completely honest, and therefore doubly dangerous. Yet “his obvious sincerity made it hard to dislike him, whatever views one might have about the cause for which he stood—and about some of the followers he had attracted.

“I suppose,” he began, “the chief object of your visit is to register a formal protest against the Federation scheme. Am I correct?”

“That is my main purpose, Mr. Secretary. As you know, for the last five years we have tried to awaken the human race to the danger that confronts it. The task has been a difficult one, for the majority of people seem content to let the Overlords run the world as they please. Nevertheless, more than five million patriots, in every country, have signed our petition.”

“That is not a very impressive figure out of two and a half billion.”

“It is a figure that cannot be ignored. And for every person who has signed, there are many who feel grave doubts about the wisdom, not to mention the rightness, of this Federation plan. Even Supervisor Karellen, for all his powers, cannot wipe out a thousand years of history at the “stroke of a pen.”

“What does anyone know of Karellen’s powers?” retorted Stormgren. “When I was a boy, the Federation of Europe was a dream—but when I grew to manhood it had become reality. And that was before the arrival of the Overlords. Karellen is merely finishing the work we had begun.”

"Europe was a cultural and geographic entity. The world is not—that is the difference.”

“To the Overlords,” replied Stormgren sarcastically, “the Earth probably is a great deal smaller than Europe seemed to our fathers—and their outlook, I submit, is more mature than ours.”

“I do not necessarily quarrel with Federation as an ultimate objective—though many of my supporters might not agree. But it must come from within—not be superimposed from without. We must work out our own destiny. There must be no more interference in human affairs!”

Stormgren sighed. All this he had heard a hundred times before, and he knew that he could only give the old answer that the Freedom League had refused to accept. He had faith in Karellen, and they had not. That was the fundamental difference, and there was nothing he could do about it. Luckily, there was nothing that the Freedom League could do, either. “Let me ask you a few questions,” he said. “Can you deny that the Overlords have brought security, peace, and prosperity to the world?”

“That is true. But they have taken our liberty. Man does not live—”

“—by bread alone. Yes, I know—but this is the first age in which every man was sure of getting even that. In any case, what freedom have we lost compared with that which the Overlords have given us for the first time in human history?”

“Freedom to control our own lives, under God’s guidance.”

At last, thought Stormgren, we’ve got to the point. Basically, the conflict is a religious one, however much it may be disguised. Wainwright never let you forget he was a clergyman. Though he no longer wore a clerical collar, somehow one always got the impression it was still there.

“Last month,” pointed out Stormgren, “a hundred bishops, cardinals, and rabbis signed a joint declaration pledging their support for the Supervisor’s policy. The world’s religions are against you.”

“Many of the leaders are blind; they have been corrupted by the Overlords. When they realize the danger, it may be too late “Humanity will have lost its initiative and become a subject race.”

There was silence for a moment. Then Stormgren replied.

“In three days I will be meeting the Supervisor again. I will explain your objections to him, since it is my duty to represent the views of the world. But it will alter nothing—I can assure you of that.”

“There is one other point,” said Wainwright slowly. “We have many objections to the Overlords—but above all we detest their secretiveness. You are the only human being who has ever spoken with Karellen, and even you have never seen him! Is it surprising that we doubt his motives?”

“Despite all that he has done for humanity?”

“Yes—despite that. I do not know which we resent more—Karellen’s omnipotence, or his secrecy. If he has nothing to hide, why will he never reveal himself? Next time you speak with the Supervisor, Mr. Stormgren, ask him that!”

Stormgren was silent. There was nothing he could say to this—nothing, at any rate, that would convince the other. He sometimes wondered if he had really convinced himself.

Want more Clarke? Sign up to get the best in SFF sent straight to your inbox!