Discover The Terrifying Novel Behind Village of the Damned

Before the movie, there was John Wyndham’s eerie tale of alien invasion in a quaint British town…

In John Wyndham’s chilling and understated novel The Midwich Cuckoos—the inspiration behind the cult horror film Village of the Damned—writer Richard Gayford and his wife return from a weekend vacation to learn their town of Midwich has been entirely sealed off by the army. In the brief time they’ve been away, something very strange has happened to the sleepy hamlet, something no one wants to discuss. Eventually, confused officials reveal that they quarantined the town after all Midwich residents were discovered to be unconscious.

But by the morning of the 28th, the strange spell over Midwich seems to end as abruptly and inexplicably as it began. Its inhabitants rise from the positions they fell in when sleep overtook them, and soon the village is as awake again as it ever was, its residents stiff but otherwise fine ... until the pregnancies. Slowly, the women of Midwich realize their bodies are hosting extraterrestrial beings capable of powerful collective thought — and that they are all set to give birth on the same day.

Wyndham’s compulsively readable book about a town overtaken by brood parasitic aliens was adapted into a 1960 movie of the same name. In 1995, the 1960 film was remade by horror master John Carpenter, with terrifying results. Carpenter’s unforgettable Village of the Damned stars Christopher Reeves in his final movie role, and has since become a cult classic.

Discover the creeping dread of Wyndham’s story for yourself in the following excerpt. In this passage, young Miss Ferrelyn Zellaby reveals to her stepmother Angela that she’s pregnant. But Ferrelyn’s confession is met with a surprising—and ultimately, frightening—reaction from the older woman. 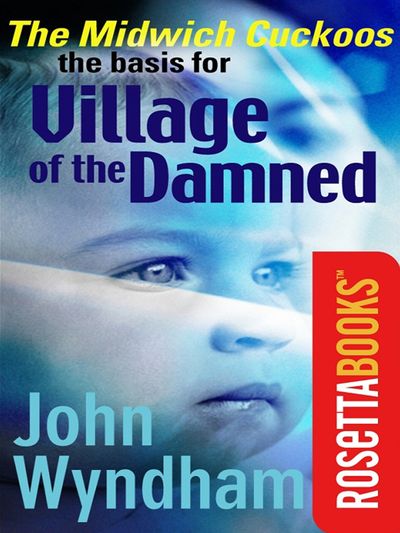 Ferrelyn arose on Saturday morning with her secret still unshared.

‘I’ll really have to tell her today—even if everything doesn’t seem absolutely right for it. A person could go on this way for weeks,’ she told herself firmly, as she finished dressing.

Gordon Zellaby was at the last stage of his breakfast when she reached the table. He accepted her good-morning kiss absent-mindedly, and presently took himself off to his routine—once briskly round the garden, then to the study, and the Work in progress.

Ferrelyn ate some cornflakes, drank some coffee, and accepted a fried egg and bacon. After two nibbles she pushed the plate away decisively enough to arouse Angela from her reflections.

‘What’s the matter?’ Angela inquired from her end of the table. ‘Isn’t it fresh?’

‘Oh, there’s nothing wrong with it,’ Ferrelyn told her. ’I just don’t happen to feel eggy this morning, that’s all.’

RELATED: Flesh-Eating Plants Take Over the World in The Day of the Triffids

Angela seemed uninterested, when one had half-hoped she would ask why. An inside voice seemed to prompt Ferrelyn: ‘Why not now? After all, it can’t really make much difference when, can it?’ So she took a breath. By way of introducing the matter gently she said:

‘As a matter of fact, Angela, I was sick this morning.’

‘Oh, indeed,’ said her stepmother, and paused while she helped herself to butter. In the act of raising her marmaladed toast, she added: ‘So was I. Horrid, isn’t it?’

Now she had taxied on to the runway, Ferrelyn was going through with it. She squashed the opportunity of diverting, forthwith:

‘I think,’ she said, steadily, ‘that mine was rather special kind of being sick. The sort,’ she added, in order that it should be perfectly clear, ‘that happens when a person might be going to have a baby, if you see what I mean.”

Angela regarded her for a moment with thoughtful interest, and nodded slowly.

‘I do,’ she agreed. With careful attention she buttered a further area of toast, and added marmalade. Then she looked up again.

Ferrelyn’s mouth fell a little open as she stared. To her astonishment, and to her confusion, she found herself feeling slightly shocked ... But ... Well, after all, why not? Angela was only sixteen years older than herself, so it was all very natural really, only… well, somehow one just hadn’t expected it ... It didn’t seem quite ... After all, Daddy was a triple grandfather by his first marriage …

Besides, it was all so unexpected ... It somehow hadn’t seemed likely … Not that Angela wasn’t a wonderful person, and one was very fond of her ... but, sort, of as a capable elder sister ... It needed a bit of readjusting to ...

She went on staring at Angela, unable to find the right-sounding thing to say, because everything had somehow turned the wrong way round ...

Angela was not seeing Ferrelyn. She was looking straight down the table, out of the window at something much further away than the bare, swaying branches of the chestnut. Her dark eyes were bright and shiny [...] Angela bent forward, and put her face in her hands. Ferrelyn jumped up as if she had been suddenly released. She ran to Angela, put her arms round her, and felt her trembling. She held her close, and stroked her hair, and made small, comforting sounds.

RELATED: 12 Sci-Fi and Fantasy Book to Movie Adaptations That Are Worth Watching

In the pause that followed Ferrelyn could not help feeling that a curious element of miscasting had intruded. It was not an exact reversal of roles, for she had had no intention of weeping on Angela’s shoulder; but it was near enough to it to make one wonder if one were fully awake.

Quite soon, however, Angela ceased to shake. She drew longer, calmer breaths, and presently sought for a handkerchief.

“You see,’ she explained, ‘I’ve not really dared to believe it myself. Telling it to somebody else suddenly made it real. And I’ve always wanted to, so much, you see. But then nothing happened, and went on not happening, so I began to think—well, I’d just about decided I’d have to try to forget about it, and make the best of things. And now it’s really happening after all, I—I—’ She began to weep again, quietly and comfortably.

A few minutes later she pulled herself together, gave a final pat with the bunched handkerchief, and decisively put it away.

‘There,’ she said, ‘that’s over. I never thought I was one to enjoy a good cry, but it does seem to help.’ She looked at Ferrelyn. ‘Makes one thoroughly selfish, too—I’m sorry, my dear.’

‘Oh, that’s all right. I’m glad for you,’ Ferrelyn said, generously she thought because, after all, one had been a bit anti-climaxed. After a pause, she went on:

‘Actually, I don’t feel weepy about it myself. But I do feel a bit frightened ...’

The word caught Angela’s attention, and dragged her thoughts from self-contemplation. It was not a response she expected from Ferrelyn. She looked at her step-daughter for a thoughtful moment, as if the full import of the situation were only just reaching her.

‘Frightened, my dear?’ she repeated. ’I don’t think you need feel that. It isn’t very proper, of course, but—well, we shan’t get anywhere by being puritanical about it. The first thing to do is to make sure you’re right.’

‘I am right,’ Ferrelyn said, gloomily. ‘But I don’t understand it. It’s different for you, being married, and so on.’

Angela disregarded that. She went on:

‘Well, then, the next thing must be to let Alan know.’

‘Yes, I suppose so,’ agreed Ferrelyn, without eagerness.

‘Of course it is. And you don’t need to be frightened of that. Alan won’t let you down. He adores you.’

‘Are you sure of that, Angela?’ doubtfully.

‘Why, yes, you silly. One only has to look at him. Of course, it’s all quite reprehensible, but I shouldn’t be surprised if you find he’s delighted. Naturally, it will—Why, Ferrelyn, what’s the matter?’ She broke off, startled by Ferrelyn’s expression.

The look of sympathy died from Angela’s face. Her expression went cold. She started to get up.

‘No!’ exclaimed Ferrelyn, desperately, ‘you don’t understand, Angela. It isn’t that. It wasn’t anybody! That’s why I’m frightened ...”

Want more great sci-fi? Sign up to get out-of-this-world stories sent straight to your inbox.

In the course of the next fortnight, three of the Midwich young women sought confidential interviews with Mr Leebody. He had baptized them when they were babies; he knew them, and their parents, well. All of them were good, intelligent, and certainly not ignorant, girls. Yet each of them told him, in effect: ‘It wasn’t anybody, Vicar. That’s why I’m frightened ...’

When Harriman, the baker, chanced to hear that his wife had been to see the doctor, he remembered that Herbert Flagg’s body had been found in his front garden, and he beat her up, while she tearfully protested that Herbert hadn’t come in, and that she’d not had anything to do with him, or with any other man.

Young Tom Dorry returned home on leave from the navy after eighteen months’ foreign service. When he learned of his wife’s condition, he picked up his traps and went over to his mother’s cottage. But she told him to go back and stand by the girl because she was frightened. And when that didn’t move him, she told him that she herself, respectable widow for years was—well, not exactly frightened, but she couldn’t for the life of her say how it had happened. In a bemused state Tom Dorry did go back. He found his wife lying on the kitchen floor, with an empty aspirin bottle beside her, and he pelted for the doctor.

One not-so-young woman suddenly bought a bicycle, and pedalled it madly for astonishing distances, with fierce determination.

Even Miss Ogle, at the post office, was observed eating a curious meal which involved bloater-paste spread half an inch thick, and about half a pound of pickled gherkins.

A point was reached when Dr Willers’ mounting anxiety drove him into urgent conference with Mr Leebody at the Vicarage, and, as if to underline the need for action, their talk was terminated by a caller in agitated need of the doctor.

Featured still from "Village of the Damned" via Universal Pictures