'Give Us a Happy Ending & Don’t Hurt The Dogs': Writing The Sterkarm Handshake

Author Susan Price shares the trials, tribulations, and joys of writing her time travel novel The Sterkarm Handshake and its sequels.

Years ago, I took a holiday on the Scottish Borders. Every day, a group of us went out with excellent Blue Badge guides and walked a stretch of the border hills. The guides kept saying, ‘We’re following an old reivers’ trail today,’ or ‘That tower’s an old reivers’ tower,’ or ‘Reiver bands used to meet at this thorn tree.’

I knew nothing about reivers except—weren’t they cattle-thieves? Curious, I bought a copy of George MacDonald Fraser’s The Steel Bonnets—and was as riveted as the bonnets. I read how the centuries-long war between Scotland and England created a no-man’s land along the border: a ‘debateable land’ where ownership was fought over with lances and swords.

Inevitably, the Borderers evolved their own way of surviving in their lawless region, forming themselves into ‘families’ where not all members were connected by blood since people often adopted the name of the most powerful family in their district, looking to them for protection and the ‘wild justice’ of revenge. The borderers lived by raiding and running, by robbery and blood feud. The more I read of these people, the more I wanted to write about them.

I enjoy historical novels, but didn’t want to write one. I wanted to write a book that set the 21st Century and the 16th Century characters side by side. I invented a Time Tube but then had to invent how it had come into being. Who would have paid the billions needed to research and build it? Big Business. Why would they do it? Solely for profit.

How would they profit from a time machine? Well, we’re running out of fossil fuel, and there's hardly a source of food that we haven't poisoned, but back in the 16th Century there was untouched coal, gas, and oil under the hills and sea, while every crop grown and every animal butchered was one hundred per cent organic. If all that could be brought back to the present, the Company could charge its own price.

I thought about the characters I needed. A family of 16th century border reivers for sure, like the Armstrongs, the most famous of the historic riding families. I wanted to be free to invent as I liked, though, not tied to the history of the Armstrongs. So, while keeping the Armstrongs in mind as a useful model, I translated their name into Danish: ‘Sterkarm.’ It’s a perfectly good name for the area. Northern English and Lowland Scots are crammed with words originating in Norse and Anglo-Saxon. Kirk (church) for instance, or bairn (child) or quean (woman.)

What, I wondered, would the Sterkarms make of 21st Century people, with their strange clothes and strange gadgets? I imagined the Time Tube opening its round mouth on a hillside and landrovers driving out… and was reminded of Border legends about the ‘Elves under the hill’ who ride out on Midsummer’s Eve and Hallowe’en. The Sterkarms, I suddenly saw, would understand the 21st Century people as elves, and the Time Tube as a gate into Elf-Land.

It was then that I knew I was definitely going to write this book. 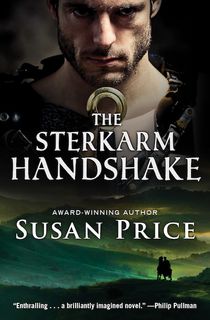 I was a little staggered by the response to it. I’d written several books before, but never one that people seemed so enthusiastic about before it was even finished. I wrote Handshake without a contract and, as I neared the end, an editor happened to phone me about another of my books. In passing, she asked if I was working on anything new.

I gave her a brief account of Handshake: Border reivers, a time machine, misunderstandings between 16th century and 21st century… A short silence and then: “You’ll let us see that book first?” No editor has ever sounded so eager to get her hands on my work.

When giving talks about writing, I often illustrate it by talking about my current work-in-progress, since it’s freshest in my mind. When Handshake was my WIP, the talks ended with people asking, ‘When is that book coming out? Where can I buy it?’ Even after I explained that I couldn’t guarantee it would ever be published, people still asked, ‘Can I pre-order it?’

RELATED: 9 Sagas to keep You Satisfied Until the Winds of Winter Due Date

Never before had people been so keen on one of my unfinished books. I didn’t understand then, and I don’t now, what it was that hooked people’s interest so firmly. If I knew, I’d put it into every book I write.

The Sterkarm Handshake is my most successful book. It won the Guardian prize, was published in America and translated into many European languages. For several years a film was threatened, though that never happened (as so often.) Even my Scots partner with the Border Reiver surname quite likes it. A bit.

I hadn’t planned to write a sequel but it occurred to me that my heroine Andrea, left lovelorn at the end of Handshake, could be transported by the Tube back to a time before the events in the first book. She could meet her beloved Per again, for the first time.

This was the germ of the second book A Sterkarm Kiss. It was complicated by the idea that the Tube doesn’t go back to our past, or even to the 16th Century of Handshake — it travels to the almost identical pasts of other dimensions. In 16th Century B, Andrea recognises all the members of the Sterkarm family but they aren’t the people she met before. To them, she’s a stranger — even to Per.

This strange Per has agreed to an arranged marriage with the daughter of his feudal enemies — a marriage brokered, Andrea learns, by the 21st Century company for its own ends. The reivers’ constant raiding and feuding interrupts the Company’s exploitation of the 16th’s natural resources. A marriage between the most bitterly feuding families will bring ‘peace on the borders.’ Won’t it? 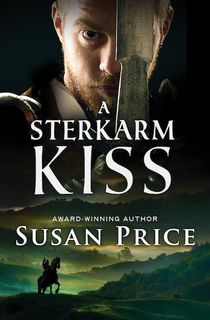 Inevitably, the marriage leads to treachery and blood-shed. One of the victims is Per’s deerhound, Cuddy — and oh, the fury of readers! Do what you like with the people, I was told, but spare the dogs. And where was the third book? I needn’t think I could end things on a cliff-hanger like that. And the third book to have a happy ending, please. Especially, happy endings for all dogs.

It was a struggle. I began the third book, A Sterkarm Tryst, twenty years after the first two and the Sterkarms, as ever, were not cooperative.

I had cursed myself with a plot where the Sterkarms from Kiss invade the world of the Sterkarms from Handshake, resulting in two identical sets of Sterkarms in the same book, each set having different past experiences. Add to the mix a 21st Century homeless man who chose to abandon his own time and live in the 16th, and the Grannam family, age-old feudal enemies of the Sterkarms.

Handling it all was as my partner puts it, ‘heid-nippin’.’ I kept forgetting where I’d left people. I had to draw maps and plans of towers.

I kept a diary of the heid-nips which you can find here.

The title took an age. It had to be ‘Sterkarm something.’ One of my readers remarked on the books’ progression from handshake to kiss. Was the third going to be even more intimate? This gave me a working title of ‘Sterkarm Shag.’

But, seriously, the title. It had to have a double meaning. A Sterkarm Handshake is a stab in the belly. A Sterkarm Kiss is a cut throat… My mind was a blank.

I met up with my writer friend Kath Roberts, and after hearing a brief summary of the plot — which includes poison — she suggested, ‘A Sterkarm Cure.’ I called it that for a long time but somehow, it didn’t seem quite right. 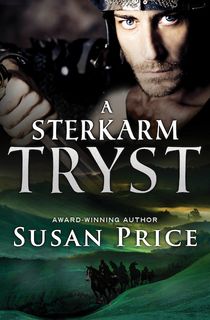 And then I was in Scotland with my partner, in Falkirk where the great cattle tryst was held for centuries. He said, “Call it Sterkarm Tryst.” And it just clicked. The rhythm and the sounds seemed right. ‘Tryst’ is an old word meaning an appointed meeting place for a hunting party — or, as with the great cattle market, a gathering at an appointed time. Later, I think, the word became confused with ‘trust’ and began to be used for lovers’ meetings. There are lovers’ meetings in my book, and cattle and also ambushes — a Sterkarm Tryst then, where only one side knows in advance about the meeting. (My partner is insufferably proud of the title.)

And I finished the third book! Many times, I thought I would never manage it. It even has a happy ending of sorts. And although the human characters meet with varied and painful ends, rest assured, no dogs are harmed.