Kristin McFarland’s No Saving Throw mashes the worlds of gaming, nerd culture, and mystery all into one hilariously endearing tale that will remind you of playing Dungeons & Dragons with your best buds. By injecting geeky humor into the story, McFarland has crafted a cozy mystery that's a critical hit.

No Saving Throw follows Autumn Sinclair, the owner of mall tabletop gaming store Ten Again, which hosts an engaging community of nerds, geeks, and gamers alike. Autumn has a pretty steady business, and a solid group of friends who have supported her through all her endeavors.

Everything is going well, until the day one of Autumn's beloved gamers is murdered. The mall is thrown into chaos as people accuse each other of being responsible for the crime. In order to save her store, and the lives of other gamers, Autumn must do some investigation of her own.

In the following excerpt, Autumn interacts with one of her workers, Hector, who has to explain to an angry customer named Cody why he “killed” him in their gaming campaign. 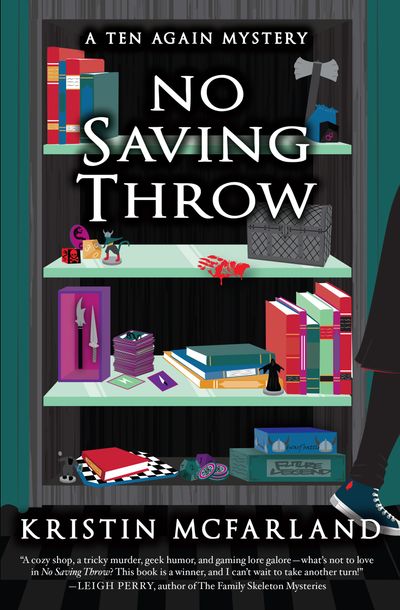 She opened her mouth, probably to reassure me, but I spotted Hector across the room, waving frantically to me from the register. I sighed, excused myself, and slid through the crowd, making my way over to him. When I reached the counter, he grabbed me and hissed, “He’s here.”

“Cody!” Hector nodded toward the back door, the one that led into the mall.

RELATED: Journey Through Tolkien's Artwork at the Morgan Library & Museum

Cody was leaning against the railing of the steps that led into the sunken shop floor, glowering at the happy customers around him. With his shaved head and round face, he looked like the love child of a troll doll and a jack-o’-lantern but without any cuteness or whimsy. He was in his early twenties, like the rest of the LARPers, but his perpetually angry demeanor made him seem older.

He saw us staring, and Hector grabbed my elbow and turned me away.

I rolled my eyes. “Why, because he’ll turn me to stone?”

“How did he get here so fast?” Hector muttered, casting a dark glance over my shoulder.

I turned, too, watching the cranky man through the sea of happy kids.

“I don’t know, but he’s coming over here.” I plastered a fake smile on my face as Cody pushed his way through the crowd to meet us at the register.

Want more geek reads? Sign up to get great sci-fi and fantasy books sent straight to your inbox!

“Do you think if we hide, he’ll notice?”

I caught Hector’s shirt before he could slink away.

“No. We can handle this. Hello, Cody. We didn’t expect to see you so soon.”

“I needed to talk to him.” He pointed to Hector, his finger trembling. “You need to take it back. Last night’s session. What happened was unacceptable.”

“Now, Cody,” I wheedled. “Hector explained what happened, and I think—”

“He killed my character because he doesn’t like me—”

“I’m not the only one,” Hector hissed.

Cody went red in the face, making him look like a particularly misshapen pomegranate. I elbowed Hector, but there was no stopping him.

“They all want you out, everyone—ask Wes. He’s here somewhere. They asked me to kill you off. If you don’t like how I did it, then you can take it up with them.”

Cody opened his mouth and closed it again, his face now brick red.

Into the awkward silence that fell, I said, “Not all groups have the right chemistry, Cody, and maybe this one didn’t handle it well, but—”

He wheeled, marching back into the crowd—going to find Wes, I assumed. I turned to Hector, one hand on my hip.

He was red, too, blotches of an angry blush staining his wide cheekbones.

He said “boss” with an undue amount of venom, I thought, and I felt my own hackles start to rise. Before I could take him to task, though, he stormed off after Cody. I took a deep breath, counted to three, then smiled at the customer now waiting for me to ring up his purchase. I took the cards he handed me and forced myself to ask about his Spellcasters deck.

At times, running a game shop was like herding cats—or maybe herding clowns. Hormonal teenage clowns. Teenage clowns who were way too sensitive about their floppy shoes and bright red noses, and occasionally had fistfights over juggling techniques. Usually everyone spent their days having fun, laughing it up, but then one person would say the wrong thing, kill the wrong character, and suddenly it became a seriously freaky horror movie with clowns threatening to murder each other and terrifying the townsfolk.

By the time I was finished with my customer, Hector and Cody were back, Wes in tow, shouting at each other in whispers. I caught only part of it, but I distinctly heard Hector say, “Rules lawyer!” and Cody say, “Amateur hour!” Wes gave me a sheepish shrug.

I let them go at it until the customers started staring, at which point I picked up the miniature gong we kept beside the register, labeled “Store Owner and Nerf Herder Use Only,” and struck it. It was small but loud enough to make them shut up and stare at me. I smiled sweetly at them.

I turned my best this-is-serious gaze on him, the weakest one in the herd.

“Wes, did the group decide to kick Cody out?”

“Did they ask Hector to kill off Cody’s character?”

I turned to Cody.

“There you go. I’m sorry it happened, and I’m sorry they handled it so poorly, but you’re going to need to settle this with them, not me. Hector did what they wanted, end of story.”

Hector started to smirk, so I rounded on him next.

“Hector, you should have told the others that they needed to confront Cody themselves. You’re a game master, not chair of the popularity club, and as a representative of this store, you should have known better. Apologize, and tell the rest of the group they’ll be doing the same.”

RELATED: 8 Space Opera Books Like Guardians of the Galaxy

His face drained of blood, and I couldn’t blame him. I felt a tendril of pity creep up, but I quickly squashed it. Discipline needed to be kept, even if I hated doing it, and even if the pouty-faced victim didn’t deserve my justice. I was sure the others had plenty of reason to want Cody out of their game, and I could hardly blame them for wanting to avoid confrontation with him.

Hector turned to Cody, fists clenched at his sides.

A long moment passed as they glared at each other in silence. Slowly, as if moving through gelatin, Hector lifted his hand and extended it to Cody. Cody stared at it as if Hector was offering him a dead fish and not a handshake. He took a step back, and then another. He lifted one arm, his hand clenched, then pointed a finger at Hector.

He turned and pointed to Wes, then, who looked horrified to find himself in the spotlight.

Want more geek reads? Sign up to get sci-fi and fantasy books sent straight to your inbox.

He spun on his heel and marched back through the store, departing through the mall entrance. We all turned in unison to watch him, and when the door slammed shut, I saw that half the other customers had looked up from their ongoing Spellcasters games to watch the strange drama unfolding at the front of the store. I blinked, then turned back to Hector and Wes. Hector had taken on a greenish tinge, and Wes’s mouth hung slightly open, like a child who had seen his parents putting out the Christmas presents that allegedly came from Santa.

“What on earth was that?” a voice said behind me.

I flinched and turned to see Bailey Adorno, my other employee, carrying a tablet and an egg timer, ready to start the draft. Her asymmetrical bob was ruffled, the blue streak in it mussed, and her cheeks were pink.

I turned and swore. Behind me, Hector said, “That’s a dollar.”

I handed him a twenty and started walking to meet our new guests.

Nerdy easter eggs can be found throughout, and McFarland has crafted believable, geeky characters who'll remind you of your best friends. Roll for investigation with this funny, can't-miss mystery that mystery author Alex Erickson called "a natural 20."