How Dystopian YA Continues to Evolve With the Times

In the 1980s, young adult dystopian fiction was scarce. But today, it's a cultural touchstone and a force for change.

Today, YA dystopian literature is a well-established genre. But the genre's appeal, focus, and impact have evolved a lot since I was a young adult myself.

As a child growing up in the 80s, there was plenty for me to be afraid of. Like many other kids my age, I was taught by my parents and the media I consumed to fear threats like nuclear war, communism, contaminated Tylenol, drugs, AIDS, and kidnapping. I remember the first Halloween I was told not to accept unwrapped treats; before then, people in our small town regularly gave out homemade cookies or popcorn balls. But one year we were told there were people who would put razor blades in apples, and poison candy meant for little kids.

In other words, the terrors in my own life, and the fears depicted in much of 80s pop culture, were of what someone else could do to us; we dreaded how our life or our world might be destroyed by external, unfamiliar forces. YA dystopian literature, what there was of it at the time, addressed these 80s fears. But often, the dystopias were presented in such a way that they seemed as incredible as the plot of any horror movie—scary, yes, but unlikely.

At the time, YA dystopian lit was nowhere near the juggernaut that it is today, although there were some dystopian titles that made a huge impression on me personally. For example, I vividly remember An Alien Music (1982), by Annabel Johnson, in which a 16-year-old becomes one of Earth's last survivors and sets out to colonize Mars. There was also the 1980 book This Time of Darkness by H.M. Hoover, which falls tonally somewhere between 1984 and Brave New World—for kids 11 and up!—in which an 11-year-old girl living in an underground city is surveilled by the government after she learns to read.

1980s kids may also remember the 1974 apocalyptic/dystopian book Z for Zachariah by Robert C. O’Brien, in which 16-year-old Ann believes she is the last survivor of the nuclear war.

However, the lion's share of YA books in the 80s were semi-realistic series fiction. Reflecting on the books of the era, people mention Judy Blume, the Sweet Valley High series, and Christopher Pike. Depending on how old you were, you may have also read books featuring The Babysitters’ Club, The Hardy Boys, or Nancy Drew. 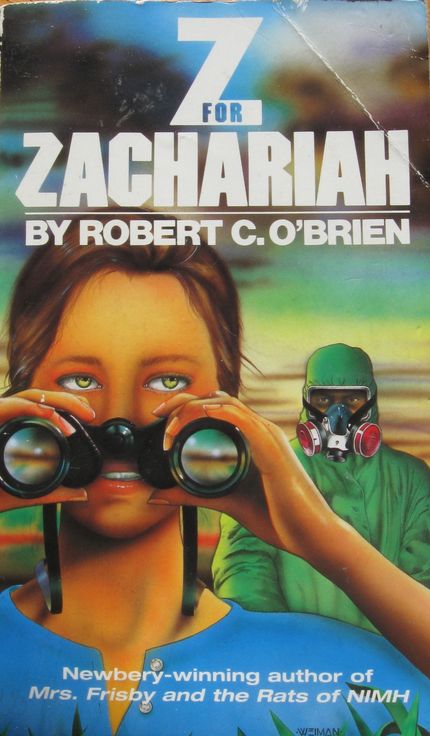 Want more dystopian YA? Sign up for The Portalist's newsletter!

Dystopia didn't stake its claim on YA lit until well after I was out of the target audience. YA dystopia really took off in the ‘00s with The Hunger Games (2008) and its sequels, although many say that Lois Lowry’s The Giver launched the genre in 1993.

Regardless, by the early 2010s, bookstores were awash in series featuring a plucky teen, usually out of step with the world around them, undervalued and possessing certain previously dismissed talents, faced with the task of saving society from annihilation.The Maze Runner, Divergent, Legend, Matched, Unwind, and Delirium were just some of the bestselling titles that launched a legion of sequels.

The scholarly reasoning behind this boom of interest in dystopian literature has been that YA dystopia allows a place for teens to safely reflect on their own development and experience: placed in this exotic, heightened context, the challenges of growing up are easier to handle. But the genre can go beyond self-awareness and may also give young readers a way to process and understand a world that cuts ever-closer to the ideas presented within the pages.

For instance, many of the most recognized additions to YA dystopia depict a distrust of government or a fear of environmental apocalypse. In The Hunger Games, Katniss stands against a totalitarian regime; in Divergent, environmental destruction has ravaged a far-future U.S.A.

It's not a stretch to guess that some of the most prominent themes in the current YA genre reflect modern-day concerns, manifesting the genuine fear many have of our government and the mess we’re making of the environment.

Unlike the external boogeymen children were taught to fear in the 80s, many modern kids are terrified of governmental corruption and of humanity's lackluster response to global warming. In April 2017, Good Morning Britain surveyed British kids about their fears. 38% worried about the future of the environment; 86% were concerned about Donald Trump’s presidency.

Immediately following the 2016 U.S. presidential election, The Atlantic wrote about children’s reactions. In the article, a teacher in Philadelphia reported a first grader saying “[he had] heard that as president, Trump would push a button and send a bomb that would blow everyone up.”

RELATED: 7 Books That Warn Us About Technology Taking Over

A 2012 Scientific American article about humanity's fascination with the apocalypse said, in reference to the beliefs of apocalyptic fiction author and child psychologist Steven Schlozman, that "the propensity to panic is not constant in history but instead reflects the times. In today's complicated world with terrorism, war, fiscal cliffs and climate change, people are primed for panic."

That panic can lead people—particularly young adults and children—to be particularly compelled by apocalyptic and dystopian fiction, because those genres offer a heightened version of the horror we see in our own world. Scientific American argues that fiction which features heightened iterations of real-life anxieties can be appealing and even validating for fatalistic readers and audiences.

Want more dystopian YA? Sign up for The Portalist's newsletter!

Of course, the appeal of YA dystopian fiction is likely not just the disturbingly familiar dystopias it presents, but also the young protagonists who take charge of their own chaotic and dysfunctional worlds. Standing up for what's right is the order of the day for the dystopian YA hero, and today’s readers have long internalized this message—probably from the time they cheered Harry Potter to triumph over Voldemort.

As young actress Rowan Blanchard toldTeen Vogue in November 2016,“Activism is a need to know, a need to explain, and a need to help.” This message that it's cool to be concerned seems to be resonating with many, particularly within the YA demographic.

As dystopian YA continues to more closely reflect the current cultural and political climate, industry insiders say they anticipate readers wanting more stories of young protagonists fighting for justice. Literary agent Jeff Ourvan told Kirkus Reviews he sees “readers are looking for explanations and revelations across all genres that make sense about what’s going on right now and what the future might hold.”

Literary manager Alex Glass said in an interview with Kirkus Reviews that he “[foresees] a lot of books on civil unrest and disobedience—[…] about taking events and experiences that sometimes seem distant and unknowable and bringing them into focus […] there is going to be even more need now for characters who show the humanity in perspectives that are vastly different from our own.”

Dystopia often seems to be about the nightmare scenarios that cause our world to fall apart. But now there seems to be a hunger for dystopian YA that also shows us how people come together. If books can cause readers to think, to question, to consider how far have we gone and what can we do to recover—that can compel action. Hopefully, that aspect of dystopian YA will continue to be a constant for some time to come.

This article was originally published on June 20th, 2017.