Former astronaut Buzz Aldrin explores the dark side of the Moon in this raw tale of depression and the complexities of celebrity.

In honor of the 50th anniversary of the Moon landing, we're looking back at Buzz Aldrin's fascinating and often-surprising memoir, Return to Earth. When Aldrin stepped foot on the Moon 50 years ago this July, he instantly became a near-mythical figure for many, but the engineer and military man was conflicted when it came to fame.

Aldrin has a family history of suicide and depression that he had yet to come to terms with at the time of his historic flight. Shortly prior to Apollo 11, his mother—Marion Moon—passed away from an overdose of sleeping pills (the official cause of death was listed at the family's request as a heart attack). Aldrin's maternal grandfather had also died by suicide years before.

Under the pressure of his newfound celebrity, Aldrin's relationship with his then-wife Joan began to crumble, and the astronaut was forced to face the reality of his own deteriorating mental health.

In his intimate memoir Return to Earth, Aldrin takes readers to the Moon with him, and brings them along on his crushing descent into infidelity, alcoholism, and depression. His story of reckoning and rehabilitation is, ultimately, a reminder of the need to de-stigmatize mental illness—because even our larger-than-life heroes aren't immune. 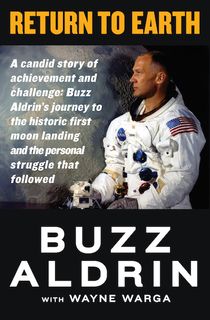 The first question Roy Neal asked was, “Now that almost two years have gone by, why not tell us how it really felt to be on the moon?”

If any one question was anathema to me, that was it. Roy, I suppose, felt he had no choice. Yet, it has always been almost impossible for me to answer with any sort of decent response.  My throat went dry and I became dizzy. Carefully, I picked my way through to a reply.

I remember little more of the interview. When it was over I stepped down and stood before about fifty chamber of commerce members and their wives, all waiting for autographs. I signed a few and when the shaking became uncontrollable, I grabbed Joan and ran for the door.

RELATED: Alan Shepard, the Apollo 1 Disaster, and the Race to the Moon

In the privacy of an alley near the auditorium, I choked back my emotions and quietly wept. Joan stood silently by, and when I had composed myself she took me to the nearest bar.

I was inconsolable. Joan insisted that the whole evening came off much better than I was willing to admit, and added that—as usual (this was by now a theme of hers)—I was judging myself much too harshly. I got rather drunk.

The correct term for what now happened to me is a quasi-medical term, “dysfunction.” What it means is that I stopped. Stopped everything. I’d go to my office in the morning, determined to work a full day and then go home to more work. I’d sit down at my desk and stare out the window. A few hours would go by and I’d drive to the beach at Galveston and walk. Then I’d go home for dinner, turn on the television, and get a bottle of Scotch. Or I’d not go home at all until everyone was in bed.

RELATED: NASA, the Challenger Disaster, and How One Phone Call Could Have Saved the Crew

Several times I resolved to get help, but I could not believe that I was now incapable of getting myself going. Every time I decided to get help I began to cry; the only help available was official Air Force treatment and the matter would go into my record. I was sullen and uncommunicative, and even Joan gave up trying to draw me into conversation. One night she invited some neighbors from down the street for dinner, hoping to at least get me out of bed for a few hours. In a burst of uncharacteristic candor, I told my neighbor, who was also a doctor, what was going on. He and his wife nodded wisely throughout my explanation. When it was done, they looked at each another. He urged her to tell their story. It turned out that she, too, had undergone several severe depressions, but had worked her way out of them through religion. She was now heavily involved in her church and was feeling fine. I accepted her story as encouragement, but in no way did I believe religion could get me through. Religion helps, and I am a religious man, but I know its limitations in curing mental depression.

Want more space books? Sign up for our newsletter, and get the best in science and science fiction sent straight to your inbox!

I could see no hope, no possibility of controlling anything. I began staying up nearly all night every night with some vague fear of sleeping in the darkness. I could once again intellectually refute such a thought, but my intellect was by now separated by the jagged and dangerous wall of my emotions. The rule of my emotions was absolute and ruthless. In no way could I stop what I felt, but I hoped somehow to stop feeling anything at all. I yearned for a brightly lit oblivion—wept for it.

In depression, I went to Dr. Dick Slarve, a colonel who had, at my request, accompanied us on the trip to Europe. I had come to like Dick and felt in some way he might understand what was happening to me, might know who could help. I no longer cared whether or not my sickness went on my record and told him so. I desperately wanted help. Dick made a telephone call to Dr. Carlos Perry at Brooks Medical Center in San Antonio. By this time I was becoming physically ill as well. My neck, which had troubled me from time to time, was now painful, and the fingers on my left hand were going numb. Dick said that Dr. Perry would be the Air Force doctor who could best make a tentative diagnosis and then decide what treatment I should receive. An appointment was made for October 26, 1971, in San Antonio.

Finally I was able to state my deepest fears about my sickness, fears so strong that I had never mentioned them to anyone. My maternal grandfather, after a long period of melancholy, chose to end his life. When my mother died in May 1968 the cause of death was listed as cardiac arrest. My father, sisters, and I had asked that this be the stated cause of death. In the last years of her life she had been listless and unhappy except during family gatherings when grandchildren were around. She had taken too many sleeping pills once before, but my father had discovered it and rushed her to a hospital. At the time we figured it might have been accidental. So, for that matter, could the second—and fatal—incident have been accidental. We recognized that she no longer had a strong will to live and something within her must have welcomed release.

Grandfather. Mother. Son? Could I have inherited this dreadful melancholy? Would I one day be suicidal? Was I now?

There was another deep fear that had moved around the margins of my mind, but I had never articulated it until I was in the hospital: the flashes I had observed going to and returning from the moon. The flicker-flashes were finally determined to be minute meteorlike substances which I saw when they penetrated my eyes and passed through my brain and out through my helmet. Neil had seen them too and maybe he was right in not being especially interested in talking about them. We had subsequently learned that it was believed the flashes destroyed small amounts of the billions of cells that make up our brains. Scientific studies were being conducted in a number of places which seemed to indicate the possibility of some damage on very long space flights to distant planets.

Could this have happened to me?

RELATED: How Ham the Astrochimp Paved the Way for Human Spaceflight

In honor of the July 16, 1969 launch of Apollo 11, Aldrin and astronaut Michael Collins are reuniting at the Kennedy Space Center to commemorate the historical flight. Their reunion is one of many events this July to mark the extraordinary voyage of Apollo 11 — a voyage which changed America, and Aldrin, forever.

To get more of Aldrin's insight on spaceflight, you can also pick up his two other memoirs, Magnificent Desolation: The Long Journey Home from the Moon and No Dream Is Too High: Life Lessons from a Man Who Walked on the Moon. Aldrin has also brought his passion for space to bear as a fiction writer. His science fiction novel Encounter With Tiber follows Chris, an astronaut who discovers evidence of an ancient alien race on the surface of the Moon.

Want more Buzz Aldrin? Sign up for our newsletter, and get the best in space delivered straight to your inbox!