What Happens When an Old Woman Steals Your Story?

In celebration of the re-release of "A Matter of Oaths," the author reveals how her space opera found an unexpected protagonist.

Editor's Note: Helen S. Wright's  A Matter of Oaths first came out in 1988. Now, Bloomsbury Caravel is republishing the novel on November 23rd with an introduction from The Long Way to a Small, Angry Planet author Becky Chambers. Below, Wright explains how her enduring story came to represent a character not often seen in genre fiction. 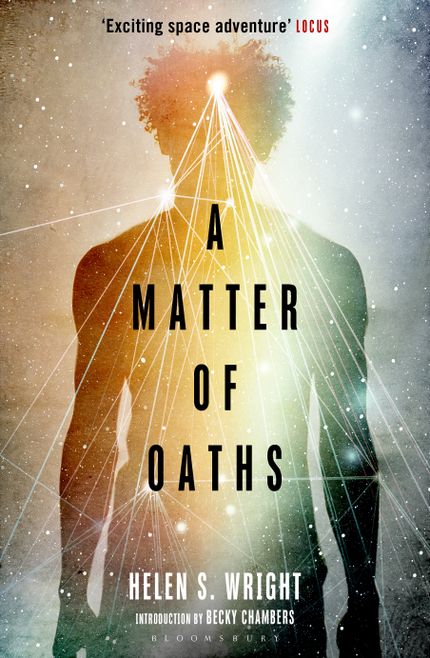 I didn't write the book I started.

I did a lot of world-building, in my head and in a succession of shorthand notebooks—my half hour commute on the Underground was the ideal time to do this, if I didn't want to spend the time looking at the armpits of fellow commuters. I'd worked through the major themes in the story, in conversation with good friends. I had a small number of 'way-points' identified–key scenes that might or might not survive the writing process, but at least gave me the confidence that there was a story to tell. I had a conception of my two main characters—who they were at the beginning of the book, and what was important to them and why. In short, I was good to go.

The best laid plans, and all that.

I'm not an expert in writing, just an expert in how I write, but writers each have a different way of approaching a story. Some outline everything meticulously before they sit down to put flesh on those bones; others start with a completely blank sheet of paper and see where the story takes them.

Like most, I'm somewhere between those two extremes. I lay the groundwork first, but then I write the story beginning to end, learning how the framework and characters that I've created shape the story. And beginning to end means exactly that: I have to get the first words on the first page in a way that lets me hear the tone of the story, gives me a solid take-off zone. And if I can't, I bog down until I can find a way in.

The first scene in A Matter of Oaths just didn't work from either lead viewpoint: no spark, even though both were very strong individuals. I tried several times, but the core problem was clear: what I needed to happen at the start of the book could never happen in the world as I conceived it with the two characters I had. Something had to come out of left field that fitted both the story and the world.

In science fiction, there's a black hole that swallows women protagonists when they reach their 40s.

I decided to write the first scene from the point of view of a minor character, just to see if I could get things moving.

We've come a long way in the last thirty years. It's easier to find ourselves in the books we read, ourselves and the people in the world around us: all genders, all sexualities, all colors of skin, all faiths and none. It's no longer unheard of to find characters in science fiction that don't fit the white male heterosexual model from a vaguely Christian culture, although there's still a very long way to go until it's unremarkable in a book, when a character can be lesbian or a person of color and it isn't a plot point, it's just who they are.

But there are some areas in which we've seen little change. We all know old people, unless we've lived all our lives in a bio-dome without external communications—grandparents, friends and colleagues, neighbors. We see them in the street, on television, in films. They write books, they read books, they appear in books. Or rather, they appear in some books, but not so much in science fiction.

RELATED: How to Subvert Tropes to Save the World

Want more sci-fi? Sign up for The Portalist's newsletter, and get transportive tales delivered straight to your inbox.

The Internet's primary purpose is to share cute and funny pictures of cats, but it's a really good source of lists as well. So, I went looking for recommendations for science fiction with old women in a lead role. You can find good discussions, all with excellent recommendations, but only if you search for 'older' women. And when you delve into the detail, they're defining as 'older' anyone over 40 and sometimes even over 30. From my end of the telescope, 30 and 40 are not old—nor were they when I was 30 (the year A Matter of Oaths was first published). The United Nations defines old age as 60 years plus; the World Health Organization as 50+ in some countries. But in science fiction, there's a black hole that swallows women protagonists when they reach their 40s.

There are always a few exceptions that show what readers and writers are missing.

Want an old woman who has spent her life accommodating the wants and needs of others, who takes a decision late in life that others would think insane, and as a result gets the life and respect she always deserved (plus some unexpected neighbors)? Try Ofelia Falfurrias in Elizabeth Moon's Remnant Population.

RELATED: 10 Female SF/Fantasy Authors and the Stories Behind Their Pen Names

Want a woman with more years behind her than before, who has given 40 years of political service and the life of her beloved husband to her adopted planet, who decides that the rest of her life will be completely different (through advanced reproductive technology)? Try Cordelia Vorkosigan in Lois McMaster Bujold's Gentleman Jole and the Red Queen.

Want an old woman to whom politics is life's breath? Who has been thwarted in the past, but now has an opportunity to re-shape her world, balancing the introduction of technology with the need to protect the past? Try Ilisidi in C.J. Cherryh's Foreigner series (with added linguistics, spaceships and aliens who happen to be human).

Then think of the possibilities that other old women would bring.

Military commander Helmuth von Moltke the Elder once said: "No plan of operations extends with any certainty beyond the first contact with the main hostile force." Add the fact that old women come with a whole load of experience and firm opinions, and it was inevitable that the book I wrote was not the book I anticipated. The world building held up, and some of the key themes. Two of the main characters survived, if changed in important respects. But the plot went in directions I had never anticipated; when an old woman steals your story, anything can happen. But, as Ursula LeGuin says: "the story boat is a magic one. It knows its own course. The job of the person at the helm is to help it find its own way to wherever it's going."

Want more sci-fi? Sign up for The Portalist's newsletter, and get transportive tales delivered straight to your inbox.