Wanted: One Paleontologist, Willing to Travel Through Time

Serious possibility of violent death. Must be willing to relocate to the Mesozoic.

Richard Leyster is comfortable in his role at the Smithsonian—that is, until an enigmatic man arrives in his office to offer him a job with a truly unique incentive package.

In Michael Swanwick's Nebula, Hugo, and Locus Award-nominated novel Bones of the Earth, time travel technology allows paleontologists like Leyster an unprecedented opportunity to observe the creatures they've dedicated their lives to. But traveling to prehistory can have messy consequences, particularly when some of the most fierce animals that ever lived are involved.

If you're looking for a book that will rekindle your childhood love of dinosaurs, without sacrificing science and story, strap in for Swanwick's tale of the 'bone men' and 'bone women' tasked with researching dinosaurs in the flesh.

Read on for an excerpt!

Bones of the Earth 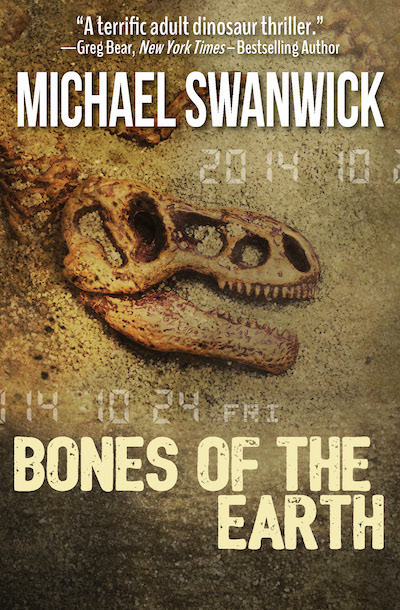 If the whole tangled affair could be said to have a beginning at all, it began on that cold, blustery afternoon in late October when the man with the Igloo cooler walked into Richard Leyster’s office. His handshake was firm, and he set the cooler casually down on a tabletop between a lime-green inflatable tyrannosaur and a tray of unsorted hadrosaur teeth without asking permission first. His smile was utterly without warmth. He said his name was Griffin and that he had come to offer Leyster a new position. Leyster laughed and, sitting back on the edge of his desk, put down the man’s card without looking at it. “You could hardly have chosen a worse time to make the offer.”

“Oh?” Griffin shifted a stack of AutoCAD boxes from a chair to the floor. His suit was expensive; he tugged at the knees as he sat, to protect the cloth. He had a heavy, inexpressive face. “Why is that?”

“Well, to begin with, the Smithsonian gave me my current position while I was still finishing up my doctorate. That’s one hell of an honor, and I’d look pretty damn ungrateful to move on after less than three years service. I realize you’re offering more money—”

“I haven’t mentioned salary yet.”

“The Smithsonian is acutely aware of what an honor it is to work for them,” Leyster said dryly. “One of our technicians moonlights selling beer at Orioles games. Guess which job pays him more?”

“There are other inducements besides money.”

“Which is precisely why you’re wasting your time. I was on a dig this summer in Wyoming where we uncovered a trackway that’s just … well, it’s the sort of find that comes along once in a lifetime—if you’re lucky. Whatever you’re offering couldn’t possibly be worth my walking away from it.”

“On the contrary,” Griffin said. “I have a much clearer idea of the value of your find than you do. And what I have to offer is better. Much better.”

“With all due respect, Mr. Griffin …”

Griffin raised both hands, palms forward. “Please. Hear me out.”

The room was empty and Griffin had closed the door behind him on entering. He slowly looked around him before speaking anyway. Then he cleared his throat, apologized for doing so, and said, “Let me begin by spelling out the terms of the contract, just to save me the trouble later on. You’ll be allowed to stay in your present position, and arrangements will be made to borrow your services for the project six aggregate months out of the year. You’ll continue to be paid by the government, so I’m afraid there won’t be any increase in your salary. Sorry.”

And then Griffin did an extraordinary thing. It was the smallest of gestures, one Leyster wouldn’t have noticed under ordinary circumstances. Now he found it riveting. Without looking, Griffin brushed back his sleeve to reveal a thick stainless steel watch. He clamped his hand over it, hiding the dial completely. Then he glanced down at the back of his hand.

He didn’t release the watch until he had looked away. Leyster had found his opening. Prodding gently, he said, “So far, you haven’t made much of a case.”

“It gets worse,” Griffin said. So he had a sense of humor! Astonishing. “There are restrictions. You won’t be allowed to publish. Oh, findings based on your own fieldwork, of course”—he waved a dismissive hand at the HDTV screen—“that sort of stuff you may publish whenever. Provided it is first cleared by an internal committee to ensure you’re not taking advantage of information gained while working for us. Further, you won’t even be allowed to talk about your work with us. It will be classified. We’ll need your permission to have the FBI run a security check on you. Strictly routine. I assure you, it will turn up nothing embarrassing ."

“A security check? For paleontology? What the hell are you talking about?”

“I should also mention that there is a serious possibility of violent death.”

“Violent death. This is going to start making sense any minute now, right?”

“A man comes into your office”—Griffin leaned forward conspiratorially—“and suggests that he has a very special job to offer you. By its very nature he can’t tell you much about it until you’ve committed yourself heart and soul. But he suggests—hints, rather—that it’s your chance to be a part of the greatest scientific adventure since Darwin’s voyage on H.M.S. Beagle. What would you think?”

“Well, he’d certainly have my interest.”

Griffin put the cooler on Leyster’s desk. “This is a gift. There’s only one string attached—you will not show it to anyone or tell anybody about it. Beyond that—” He twisted his mouth disparagingly. “Do whatever it takes to convince you it’s genuine. Cut it open. Take it apart. There are plenty more where that came from. But no photographs, please. Or you’ll never get another one to play with again.” Then he was gone.

Alone, Leyster thought: I won’t open it. The best possible course of action would be ditch this thing in the nearest Dumpster. Whatever Griffin was peddling, it could only mean trouble. FBI probes, internal committees, censorship, death. He didn’t need that kind of grief. Just this once, he was going to curb his curiosity and leave well enough alone.

He opened the cooler.

For a long, still moment, he stared at what was contained within, packed in ice. Then, dazedly, he reached inside and removed it. The flesh was cool under his hands. The skin moved slightly; he could feel the bones and muscles underneath.

It was the head of a Stegosaurus.

A gust of wind made the window boom gently. A freshet of rain rattled on the glass. Cars hummed quietly by on the street below. Somebody in the hallway laughed.

Eventually, volition returned. He lifted the thing from the cooler and set it down on the workbench, atop a stack of Journal of Vertebrate Paleontology reprints. It was roughly eighteen inches long, six inches high, and six inches wide. Slowly, he passed his hands over its surface.

The flesh was cool and yielding. He could feel the give of muscles underneath it, and the hardness of bone beneath them. One thumb slipped inadvertently onto the creature’s gums and felt the smoothness of teeth. The beak was like horn; it had a sharp edge. Almost in passing, he noted that it did have cheeks. He peeled back an eyelid. Its eyes were golden.

Where had it come from? What could possibly explain such a miracle? How could such a thing exist?

Griffin knew, and could tell, and had left behind his card. Where was it? It was somewhere on his desk. He snatched up the card. It read:

Nothing more. There was no address. No phone number. No fax. No e-mail. It didn’t even list his organization.

Griffin had left no way to get in touch with him. Griffin’s name was listed in no directory Leyster could locate. He worked for no known government agency. So far as Leyster could tell, he had never posted a comment of any kind on any subject whatsoever, or been referred to, however fleetingly, by anyone. The man did not seem to exist.

In the end, Leyster could only wait. Wait, and hope that the bastard would return.

And what if he didn’t? What if he never came back?

These were the questions that Leyster was to ask himself a hundred times a day, every day for a year and a half. The time it took Griffin to get around to ending his silence with a phone call.