Watch the Eerie First Trailer for The Chilling Adventures of Sabrina

This show is going to be spellbinding.

When most teens turn sixteen, they learn to drive. When Sabrina Spellman turns sixteen, she has to decide whether or not to wed Satan himself.

The first trailer for Netflix's upcoming original series The Chilling Adventures of Sabrina just dropped, and it features the titular witch (played by Mad Men's Kiernan Shipka) celebrating her sixteenth birthday...at a table full of legitimately terrifying guests. Watch the spooky first trailer below, then read on to learn more about the intriguing new series.

In the original Sabrina comics (and in the wholesome 90s TV series starring Melissa Joan Hart), Sabrina is an adolescent witch living in Riverdale, USA and struggling to balance the typical turbulence of high school with her magical at-home life. But the upcoming show — which has already been renewed for a second season — is based on The Chilling Adventures of Sabrina comic series, a dark, adult reimagining of the iconic Archie character.

Want more Sabrina? Sign up to get the best in fantasy sent straight to your inbox.

The Chilling Adventures of Sabrina 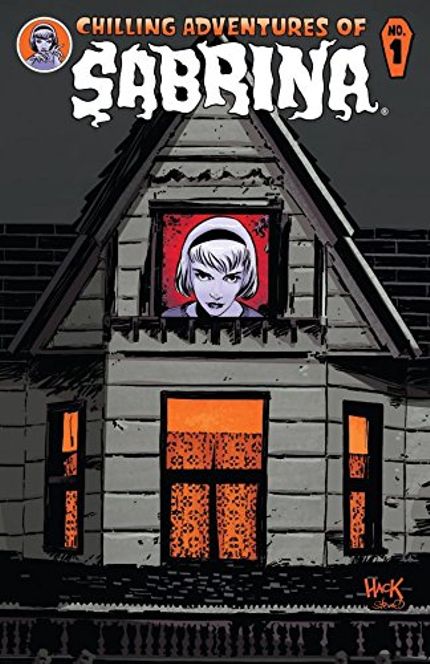 In this new series, Sabrina is still torn between the life she shares with her non-magical friends, and her occult obligations — but the stakes are higher than ever. On her sixteenth birthday, she must decide between wedding the devil —thereby renouncing her mortal love, Harvey Kinkle (Ross Lynch) — and giving up her magic forever. Things get even more complicated when a Riverdale high teacher (Michelle Gomez) becomes possessed. The series also stars Lucy Davis and Miranda Otto as Sabrina's witchy aunts Hilda and Zelda respectively, and Richard Coyle as Father Blackwood.

Want more Sabrina? Sign up to get the best in fantasy sent straight to your inbox.

It will interesting to see how and if The Chilling Adventures of Sabrina acknowledges the other ongoing series set in Sabrina's hometown — The CW's highly popular show Riverdale. Given they're on separate networks it's unlikely there will be any overlap, so we may see totally separate iterations of iconic Riverdale characters like Archie, Betty, and Veronica in Chilling Adventures. Although when one of the main characters in a series is Beezlebub himself, it's hard to care as much about the love triangle of Riverdale's most famous trio.

Chilling Adventures of Sabrina premieres on Netflix October 26th, just in time for Halloween. Will you be brave enough to watch?

Featured still from "The Chilling Adventures of Sabrina" via Netflix.

The Chilling Adventures of SabrinatrailernetflixPage
Published on 13 Sep 2018