Plus, what's next for her after the Locked Tomb series.

Hi! Thank you so much for chatting with us today. Can you start by introducing yourself to our readers?

I’m Tamsyn Muir, I’m from New Zealand, and I did not kill any of the people I’m supposed to have killed. Except one. I refuse to say which one.

"To see readers—of all genders, not just men—saying my characters were dislikable for not conforming more closely to our ideals of how girls ought to behave. That stung a lot more than I’d expected it to."

You started publishing short stories and novellas before Gideon the Ninth was released. Was Gideon something you had always envisioned or been working on? How did you make the transition from short fiction to a longer series?

Gideon had never entered my head until about a week before I started writing it. It was absolutely not a long-cherished dream or something I’d been jotting in notebooks for years, romantic as that would be. I was on a plane, I thought ‘two girls at Goth boarding school… dislike each other intensely,' and that was that. I came home and told a non-writer friend ‘I’m considering a novel about a boarding school, but everyone’s a necromancer, and it’s in space?’ and my friend was like ‘that doesn’t really sound very good but I’m here for you’ and then later I sent them Act One and they were like ‘oh okay, sorry, this makes more sense than when you tried to explain it.'

As for short fiction, the transition was the other way round. When I wrote fanfic I always wrote long by default. I taught myself to write one-shots—short single-installment character pieces, kind of 4-5k—because there was a phase where they were by far the most popular flavor in fandom and everyone went nuts for them, but my natural habitat was long plotty multi-chapter stories. In many ways, writing a novel was like returning to familiar ground. 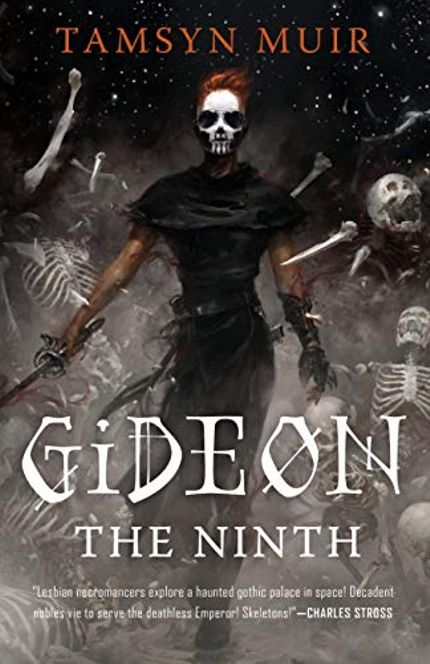 Your skill at blending genre is phenomenal, and definitely carries over into your ability to weave together biblical allegory and memes. When you sat down to write Gideon, did you know you wanted to incorporate all of those different elements? How did that come to life?

I mean… no, I definitely didn’t sit down and think ‘in this book I will try to fit in as many weird references as possible.' The way it works basically is that as I write, my brain rummages through a huge pile of festering trash and brandishes bits of it at me. Sometimes they’re Bible quotations, sometimes they’re lines from a YouTube Poop I watched back in 2003. If I like them, I put them in. When the book gets to my editor, Carl Engle-Laird, he underlines about half of the ones he notices and says kindly, ‘You can’t put this in a novel,' and I take them out again.

I get the impression some of my readers think I make a list before each book of ‘Memes To Include’ and then I go through looking for cunning places to hide them, like I’m building a scavenger hunt. I wish I was that supervillain. In the original draft of Gideon, Harrow doesn’t say ‘Oh, I have hurt your heart,' she says ‘Oh, I have rustled your jimmies.' She says that purely because that’s what my brain thrust into my hand and I liked the way it sounded. Carl said, ‘You can’t put that in a novel’ and suggested ‘hurt your feelings.' I compromised and we ended up with ‘hurt your heart.' And that’s the magic of the editorial process, especially because Gideon does, in fact, have her heart hurt by the end of the book (she forces her ribcage to shake hands with an iron fence).

Sapphic Sci-Fi and Fantasy Books That Are Spectacularly Queer

So far, each of the books in the Locked Tomb series are wildly different yet completely integrated. How difficult has it been to maintain those threads of continuity while creating something so different from before?

I feel like this question boils down to ‘did you plan this in advance?’ and my answer boils down to ‘sort of.' I’m very sorry; this is why I am bad to interview. I have known the whole story from the beginning which has helped enormously—maintaining continuity only starts to hurt if you’re making stuff up on the fly. I didn’t write Gideon while thinking ‘Harrow will be totally different.' I knew what Harrow’s story was, sure. But when I came to write Harrow, I didn’t want to write another book like Gideon because I’d already written Gideon.

And also… let’s be honest, there is no way a book from the POV of Harrowhark Nonagesimus should look or feel or sound anything like a book from the POV of Gideon Nav. Harrow’s brain is a length of rusty barbed wire locked in a box buried in a desert. Gideon’s brain is that YouTube video of the German guy who tries to jump through the ice on a swimming pool but the ice doesn’t break, so he just hurts his arse really badly and he’s lying there going ‘ah, mein Arsch, mein Arsch’ while all his friends kill themselves laughing. Nona’s brain is a GIF I saw of a dog jumping over a really high gate by whirling its tail like a propeller. 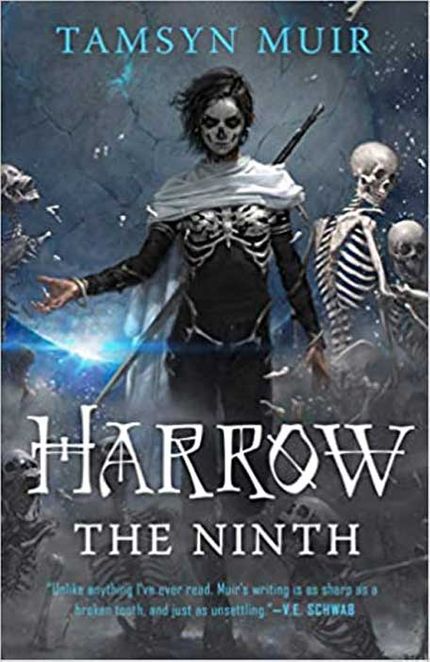 "I’m very sorry; this is why I am bad to interview."

Those images are incredible. And so accurate! When Harrow first came out, the next book was teased to be Alecto. Can you talk about why Nona beat Alecto to the publishing finish line?

I love the idea of a kind of Mario Kart-esque scenario where Alecto was about to cross the line and then a red shell came up from behind and she spun round and round in place while Nona zoomed triumphantly past. I’m afraid it’s much more boring than that. Nona was originally just the first act of Alecto, but I badly underestimated how long it was going to be. When I got to the ‘end of Act One’ I looked at my word count and freaked out, but my editor pointed out that [was] because Act One was already a self-contained story. It already had a natural arc of its own and finished in quite a closed place and would work as a standalone novel without much trimming and filling.

I was pretty resistant to the idea at first, because as far as I was concerned it was Act One and it was an integral part of a larger book, but there was also no way I could cut it down to a viable length—I’d have had to lose something like fifty or sixty thousand words. So I went along with the ‘separate novel’ plan, and in fact, now I’m glad I did because I quite like Nona having a book of her own. 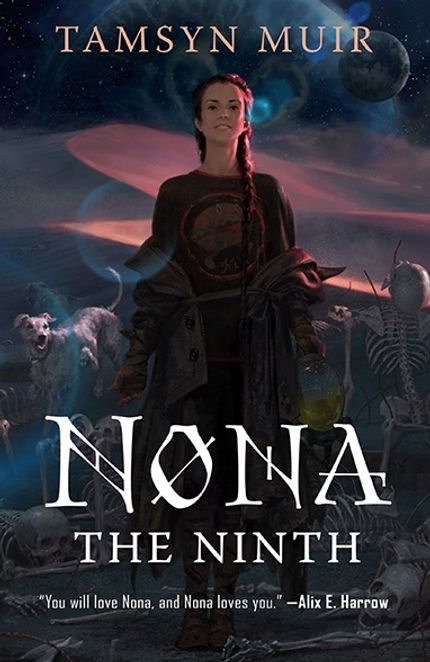 What was your favorite part about writing Nona the Ninth?

I worked as a teacher for years, so writing some of the school-based scenes brought a certain catharsis, I will admit.

We’re dying to know which House you belong to? Do you sort your friends and family into each?

I do not have a House, and my friends and family would think me unbelievably lame if I tried to put them into Houses. A. K. Larkwood, who wrote The Unspoken Name and The Thousand Eyes and is one of my small and cherished handful of trusted first readers, is definitely Seventh House. Her wife is probably Fourth (I’d assumed she too was Seventh, but she just purchased a skateboard).

Can you tell us anything about Alecto?

Well, Alecto features heavily. Other than that… I’m honestly not trying to be coy, but there’s not much I can say without giving away important stuff. If there’s a character you like who has appeared in more than one of the other books, and who is not dead by the end of Nona, there’s a decent chance you’ll get to see them in Alecto. I am only prepared to commit to ‘decent.'

I absolutely love how unabashedly fierce and female your books are. Did you ever worry about how people would react to your characters not fitting into specific feminine molds or being labeled “unlikable," or have moments when you felt yourself holding back?

I didn’t worry about this until it started happening. One reason I’ve had to take myself completely away from social media and conversations about my work was that I thought I was prepared for criticism. I imagined people complaining that, you know, my plots didn’t make sense, or my dialogue rhythm was off or whatever, and I thought okay, that’s not going to be fun but I can handle it. I’ve had criticism before. So, then Gideon came out and I started to see reviews and comments, and so many of them were along the lines of: Gideon’s so rude. She’s gross. She swears too much. Harrow’s so mean. She’s like one of those annoying girls who thinks they’re so smart. Yuck. And that just kind of drove me… wild with despair, honestly. To see readers—of all genders, not just men—saying my characters were dislikable for not conforming more closely to our ideals of how girls ought to behave. That stung a lot more than I’d expected it to. Because at no point during writing had it even occurred to me to worry about that aspect.

It is A-OK to not like my characters. Gideon and Harrow are both jerks, at least some of the time. But we’re all jerks at least some of the time, and if your main criticism of Gideon is that she should be more softly-spoken and nicer to her friends—if your main criticism of Harrow is that she shouldn’t be so confident in her own prodigious intelligence and talent—then… well, I presume you’d be making the same criticisms if they’d both been guys. Right? Right??

Before we go, let’s go on a little adventure. If you were to take your Locked Tomb characters to a theme park, where would you go? What would their favorite rides/exhibits/attractions be? And what would they all take home as a souvenir?

This is very hard for me to answer on a number of axes. We don’t even have that many theme parks in NZ, or we didn’t when I was of an age to go to theme parks. Also, most of my characters would downright refuse to set foot in one. Harrow thinks they’re a nonsensical waste of time, Camilla thinks they’re a security risk, Ianthe thinks they’re déclassé. It’s going to end up being Gideon winning a huge, gross teddy-bear for Corona on some kind of test-your-strength machine while Nona throws away her popsicle and eats the stick.

That’s amazing. Can you tell us what’s next?

Next after TLT is one or both of my novella about whooooo lives in a dystopia under the sea and my novel about [REDACTED]. I’m also writing another thing I can’t talk about yet. Hot gossip! And I have a couple of short stories coming out soon-ish in anthologies – one of them is a story set in the Diablo universe, which felt sweetly full-circle because I think the Necromancer in Diablo II was probably the first protein chain or whatever in Harrow’s DNA. So, look out for that if you like art, because it has some great art.