Poul Anderson was a Grand Master of the Science Fiction Writers of America and mainly known for his excellent works of technological science fiction, so it came as a very pleasant surprise to discover his fantasy novels Operation Chaos and Operation Luna. Not only that, turns out Anderson was way ahead of the curve in writing urban paranormal. Operation Chaos originally came out in 1971, long before the literary children of Buffy began to change the fantasy landscape. Anderson’s heroes, Steve Matuchek and Ginny Graylock, meet on the battlefield of a world magical war. He’s a werewolf assigned to escort her, an accomplished witch, to confront an afreet that has given the Saracen Caliphate a real shot at conquering the United States.

The early chapters of Operation Chaos have the flavor of Harry Potter and friends having to go off to war. Both sides employ weaponry such as dragons, invisibility, basilisks, zombies (used as hard labor), and flying carpets. Anderson’s writing is fast-moving and fun to read. For example, here's a passage in which an army officer explains the situation as Steve and Ginny are briefed for their mission:

“'The 9th Armored Division is here, the 12th Broomborne here, the 14th Cavalry here, the Salamanders here where we know they’ve concentrated their fire-breathers. The Marines are ready to establish a beachhead and retake Seattle, now that the Navy’s bred enough Krakens.' Major Harrigan snuffled into his beard and stared gloomily at a crystal ball. It was clouded and vague; the enemy had been jamming our crystals till they were no use whatsoever, though naturally we’d retaliated.” 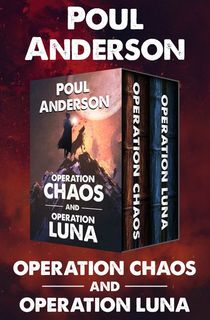 The “grown-up Potter” feel continues as, post-war, Steve and Ginny return to college. They don’t play Quidditch, but here’s an excerpt in which Steve attends a magical version of a football game: “The Wyverns levitated off and their tiny quarterback turned out to be a werepelican. Dushanovitch, in condor shape, nailed him on our twenty.”  Later in the game, an unthinking prankster looses a salamander into the stands. Its power to light anything and everything on fire results in a wild scene: “The crowd howled, hurling away their smokes, slapping at pockets where matches had kindled, getting rid of bottles. The Campus Queen shrieked as her thin dress caught fire. She got it off in time to prevent serious injury and went wailing across the field. Under different circumstances, I would have been interested.”

I was also reminded of Kevin Hearne’s The Iron Druid Chronicles in its melding of the modern and the mythic. Anderson, who was of Scandinavian heritage, was a student of the world’s mythologies and religions, and gods and powers of many kinds play a part in these stories. In order to seek an answer not available by normal means, Ginny calls upon the help of an ancient dwarf named Fjalar, and together they travel into the underworld to the roots of the sacred tree Yggdrasil. Steve and Ginny are aided by Zuni priests in Operation Luna, which also features Native American, Japanese, Chinese, and Christian deities.

I was particularly taken by Anderson involving Steve and Ginny’s children in both books. The brave Valeria, who is kidnapped by a demon in the first book, becomes a hero in her own right in Operation Luna. Ginny’s brother Will is a major character as well, as are friends of the couple who have powers of their own. The result reminded me of Deborah Geary’s A Modern Witch series, which so charmingly presents an extended magic-using family of all ages and relationships.

Ginny’s familiars, a scarred tomcat named Svartalf and a raven named Edgar, provide comic relief as well as deadly fighting skills when needed. The rivalry between them results in such exchanges as this:

“The second day of August was getting down to business when we reached the living room. Svartalf sprawled on a broad windowsill. Sunlight flooded his blackness. He absorbed it like a rug.

“Ginny went over to give him his due fondling around the throat and ears. He opened an indolent yellow eye and half purred. Edgar, back on her shoulder, leaned over and said quite distinctly, ‘Greetings, old garbage diver.’ Svartalf bared a worn-down fang and snarled a bit. Though not senile, he was venerable for a cat, or would have been had anybody venerated him.”

There were many reasons to enjoy the two books. Science fiction fans will appreciate Steve’s job as an engineer for Nornwell Scryotronics, which manufactures magical equipment such as basilisk goggles and other defense-related equipment. In Operation Luna he and the family are living in New Mexico while Steve consults on the first moon shot for NASA (the National Astral Spellcraft Administration).

All in all, an involving and delightful duo of urban paranormal/adventure hybrid novels, now available in a two-book bundle. Highly recommended!