An old farmstead in the Wisconsin backwoods hiding an unimaginable secret; a man whose job is to operate a way station between the stars, serving as a resting place for alien visitors; a study of solitude, duty, and the survival of all humankind—these were the elements of Way Station by Clifford D. Simak that made the novel, for me, such a wonderful discovery, 53 years after it was written.

Way Station won the 1964 Hugo Award for Best Science Fiction Novel, beating out several other books that science fiction readers might also consider classics: Cat’s Cradle by Kurt Vonnegut; Dune World by Frank Herbert; Glory Road by Robert A. Heinlein; and, Witch World by Andre Norton. In 1977, Simak, who is best known for City, was named a Grand Master by the Science Fiction Writers of America, the third person (after Heinlein and Jack Williamson) to receive that honor.

How’s this for the definition of a science fiction classic? A story that contains such intriguing ideas, relatable characters, and enjoyable prose that it continues to attract new fans many decades after its original publication. I started reading science fiction and fantasy as a child and became a professional editor who acquired hundreds of novels for such publishers as Baen Books, Bantam Spectra, and Del Rey over the course of a 35-year career. As a result, I must have consumed thousands of genre titles in my lifetime, so to find one written over 50 years ago that moved me this much made it doubly special. 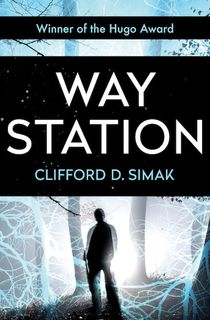 Think of the titular way station as a “star B&B,” a stopover for travelers from worlds across the galaxy. Our “innkeeper” is Enoch Wallace, a Union-side veteran of the Civil War. He was recruited to run the way station in 1867 and has held his position for nearly a hundred years. Due to the alien technology that constructed the way station, Enoch ages only when he steps outside his home, which is rarely. His job is to be available at all times to supply his alien visitors with whatever aid and assistance each might need as they travel onward to the next destination. Many leave gifts behind—some with amazing powers, others whose purpose is incomprehensible. A few travelers become friends who return again and again to visit Enoch in his solitary vigil.

Such a long life, with so much opportunity to consider a universe beyond our own, allows Enoch to realize that the omens for our own world are not good. The story begins in the 1960s—the horrors of World War II ended not so long before, but war clouds are gathering again. Newly developed atomic weapons and age-old hatreds between nations threaten Earth’s very future. And Enoch, sworn to secrecy, has literally no one on Earth he can speak to about the looming disaster.

The alien who is closest to Enoch is the one who recruited him to run the way station. Enoch dubs him Ulysses (after General Grant), and Ulysses knows humankind better than any other alien. Yet even with a galaxy’s worth of knowledge available to him, he can offer only one solution to Earth’s problems: To wipe our collective memory clean of any knowledge of destructive technology. Yes, we’d be thrown pretty much back to the Stone Age, but the crisis would be averted—for now.

Enoch feels there has to be another way—although, he can’t think what it might be. The weight of the world is, literally, on his shoulders.

Many other alien beings pass through the way station, and hearing how Enoch must deal with each one was part of the enjoyment of the story for me. Another of the most intriguing characters in the book never speaks a word. Her presence is both enigmatic and integral to the story.

I wasn’t sure what to expect before reading, although I was aware that Way Station, published in 1963, has sold hundreds of thousands of copies in its long lifetime. It’s a slim little volume, only 236 pages long in its print edition. It proves that a novel doesn’t need twice as many words to contain worlds. It’s also a very hopeful story. I’m a sucker for a good post-apocalyptic read, but I was happily convinced to believe in a future that holds grand and glorious possibilities just awaiting our discovery. Sometimes such a future seems very far away from where we sit right now, watching nighttime news and grieving over atrocities being committed across the globe. Refreshingly, the optimistic viewpoint of the main character, who has enormous challenges to face essentially on his own, reminded me of The Martian by Andy Weir.