5 Technologies from Neuromancer That Are Almost Here

The tech that Gibson predicted 30+ years ago in Neuromancer now feels closer to reality than fiction.

William Gibson’s novel Neuromancer looked like a techno-prophecy when it hit audiences in 1984. It was hugely influential on founding the cyberpunk genre, popularized the idea of “cyberspace,” and envisioned a future controlled by corporations, data, and hackers. Over thirty years later, we’re only now catching up to it.

Below are five pieces of Neuromancer tech that may soon be a reality!

Neuromancer’s protagonist is Case, a hacker who “jacks in” to cyberspace using a device called a deck, which is hooked up to hardware mounted on Case’s head (a combination of goggles, implants and electrodes). Once he’s jacked in, Case can actually see the systems he’s hacking in virtual reality, represented as cityscapes of light or walls of green ice rather than just strings of numbers and letters.

Today, we’ve already got an analogue to Case’s hacking setup: VR headsets, along with games like Darknet that simulate hacking through a network:

We’ve also got full-body motion rigs that let you run in place, lean, crouch, and jump, along with haptic feedback gloves that can simulate the sense of touch in virtual reality. All of this may eventually allow us to feel, see, hear, taste and smell cyberspace, just like Case does.

Want more sci-fi? Sign up to get out-of-this-world stories delivered straight to your inbox.

One of the most surreal locations in Gibson's novel is definitely the orbiting space station of Freeside, a spindle Bernal sphere that holds casinos, shopping districts, hotels, and even lakes. Everything is built into the curved walls of the station, which rotates to provide a kind of artificial gravity.

Scientists were already creating plans for a Bernal sphere like Freeside in the 1970s, including a scheme to mine the moon for resources, use magnetic coilguns to launch that material into space, and position the station in an island of gravitational stability between the moon, sun, and Earth. The cost? About $200 billion in today’s money.

According to physicist Gerard K. O’Neill, writing for Physics Today in 1974: "I believe we have now reached the point where we can, if we so choose, build new habitats far more comfortable, productive and attractive than is most of Earth."

In the meantime, Russia’s space agency has announced plans to create a hotel module for the ISS to accommodate space tourists—all told, it’ll run you about $60 million dollars.

Neuromancer has all kinds of weird and interesting tech on display, from active camouflage to robotic eyes, but neural implants are probably the most ubiquitous: everyone from normal citizens to gang members has some kind of hardware in their skull that allows them to access the internet, enhance their intelligence, relive memories, or experience life through other people’s senses.

We’re getting pretty close to this one—between Elon Musk’s Neuralink (which aims to create a “neural lace” to allow your brain to communicate with computers) and tech start-ups like Neurable (whose goal is to allow you to control VR and AR interfaces with your mind), a lot of money has been poured into brain-computer interfaces, with the first mind-controlled VR game debuting last year and the first official cyborg in history, Neil Harbisson, gaining recognition in 2004.

Brain surgeons like Eric Leuthardt are already convinced that neural implants are inevitable:

“A true fluid neural integration is going to happen.  It’s just a matter of when. If it’s 10 or 100 years in the grand scheme of things, it’s a material development in the course of human history.”

One of the most unsettling characters in Neuromancer is Case’s hacker wingman, McCoy Pauley (aka “The Flatine”). Before his death, Pauley managed to copy his personality, memories, and intelligence onto a ROM disk, essentially creating a virtual copy of himself.

A number of major figures in the tech and business world, including Ray Kurzweil (author of books like The Singularity Is Near and How to Create a Mind) and Dmitry Itskov (billionaire entrepreneur and founder of the 2045 Initiative) have proposed doing something similar to Pauley: either upload our minds to computers or to new robot bodies. Itskov’s 2045 Initiative claims we can even achieve digital immortality by 2045.

Scientists like Dr. Ken Hayworth, however, say we’ve still got a long way to go: even if we map the “circuitry” of the brain, we still have to figure out how the connections between all the neurons—all 86 billion of them—create a human personality.

"We are pitifully far away from mapping a human connectome,” Hayworth says. “To put it in perspective, to image a whole fly brain it is going to take us approximately one to two years. The idea of mapping a whole human brain with the existing technology that we have today is simply impossible."

2045 may be a bit too early, but organizations like the BRAIN Initiative are steadily working toward the ultimate goal of mapping our minds.

Yes! I also want to get the Early Bird Books newsletter featuring great deals on ebooks.

The plot of Neuromancer is dominated by the specter of “strong AI,” a type of artificial intelligence that thinks like a human being. In Case’s technology-dominated world, unleashing a strong AI has the potential to disrupt society—or even end humanity.

Stephen Hawking and Elon Musk have made headlines arguing that an AI apocalypse is rapidly approaching. According to a Vanity Fair profile, Musk has been working privately and publicly to keep AI technology from reaching Skynet status—his friends call it “Elon’s crusade.” Speaking in 2014, Musk called AI humanity’s “biggest existential threat,” and told one of his associates that one of the reasons he’s planning to colonize Mars is to provide a backup in case AI ever wrecks Earth.

Worst of all, Musk says the threat won’t be recognized until it’s too late: “I keep sounding the alarm bell, but until people see robots going down the street killing people, they don’t know how to react, because it seems so ethereal.”

Regardless, what keeps people coming back to Neuromancer is its vision of the next step in humanity’s evolution, which will be driven by technology, not genetics. When humans start to escape the boundaries of their bodies and minds using technology, anything becomes possible…but will it be a dream come true, or a nightmare come to life? More than thirty years later, we’re still searching for the answer. 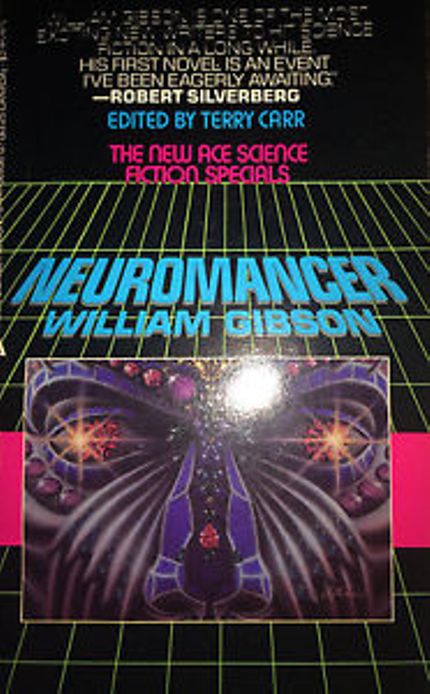 Featured photo from the 2016 Brazilian edition of "Neuromancer"