Read an excerpt from the first installment of an epic sci-fi saga.

Joe Haldeman’s beloved Worlds Trilogy remains a masterclass in dystopian science fiction. Mostly known for his critically-acclaimed novel The Forever War, which netted the author both a Nebula in 1975 and a Hugo Award in 1976, Haldeman excels at painting exciting interstellar battles and creating complex characters.

In the Worlds trilogy, the majority of humanity lives in metallic, floating environments called 'Worlds' which orbit Earth. Each individual World hosts its own population, culture, form of government, and policies to maintain order. Although the Worlds are outside of Earth's atmosphere, for economic purposes they maintain contact with humans still left on the planet.

The story focuses on a brilliant young woman named Marianne O’Hara who was raised in the World of New New York. When Marianne takes a trip down to the planet’s surface to continue her studies, she's drawn into the political conflict between Earth and the Worlds. Each subsequent book in the series follows Marianne as she becomes a major leader in the effort to prevent both the destruction of Earth and the Worlds above.

Worlds, the first installment in the series, not only sets the stage for the universe the story takes place in, but also introduces Marianne as a naive student. Marianne's character arc over the three novels is a satisfying ride that will engross readers as she grows into a fearless leader. Initially, Marianne wants to further enhance her political science skills. But after her trip to Earth reveals awful conspiracies and political secrets, she feels she has an obligation to help expose the truth to both the people on Earth and in the Worlds.

In the following excerpt, the reader is introduced to Marianne and the strange policies of New New York, specifically the mating rituals of its citizens. Due to the sparse populations of most Worlds, people that seek mates have to make sure they don't actually couple with someone from the same family-line.

Related: Joe Haldeman Shares the Story Behind The Forever War 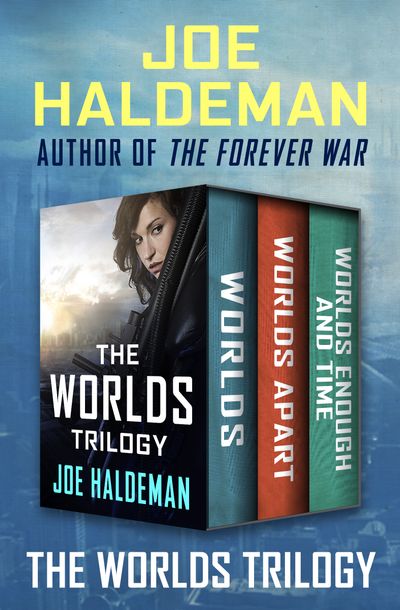 When she was a girl, Marianne knew she annoyed some people and frightened others. It would be years before she made any conscious effort to put people at ease; until then, she was socially something of a monster.

She was single-minded and broadly talented. Under New New’s merit-examination system, she was graduated from high school at age twelve; by fifteen she had baccalaureate certification in American Studies and World Systems. She earned medals in hand-ball and gymnastics and played in the orchestra. Papers she wrote while a graduate student were published in academic journals in the Worlds and on Earth. New New’s Academic Council gave her the rare opportunity to go to Earth for a year of postgraduate work.

Her mother, who had dropped out of school at the tenth-grade level, thought that Marianne was using her education as an excuse for delaying menarche, and she was not completely wrong. To Marianne, dating sounded like a boring waste of time and sex sounded gruesome. She knew that wasn’t true for most people, but she also knew she wasn’t like most people. So she exercised her legal right to put off adulthood.

For the first couple of months after menarche, Marianne had reason to wish they still did it the old-fashioned way. She cramped constantly and lost so much blood she had to have two transfusions. Her new breasts and hips ached from rapid growth and bumping into things. She felt clumsy and sore and messy and unnecessarily hirsute.

Once recovered from the transition, though, she went about becoming a woman with characteristic speed and thoroughness. She read all about it, of course, and asked innumerable embarrassing questions. She took a light academic load and kept an eye out for a likely-looking male. She found an unlikely one.

Students in New New, no matter how gifted, were not allowed to be passive beneficiaries of everybody else’s labor. O’Hara was required to do agricultural work on Thursdays and construction on Saturdays. It was while slapping paint on seemingly endless acres of wall that she met Charlie Increase Devon.

The Devonites were the largest line family in the Worlds, though not too many of them lived in New New. They had their own settlement, Devon’s World, which was sort of a cross between religious commune and brothel.

Like all Devonites, Charlie was a New Baptist. The only thing they had in common with old-style Baptists was that their initiation ceremony also involved water. They weren’t even Christian; their theology could be described as Unitarian-on-Quāāludes. They were nudists and body-worshipers. They had various interesting rituals—such as semarche, when boys became men—that formed the nucleus for a large subgenre of ribald humor in the twenty-first century. They were promiscuous and often pregnant, both by commandment.

O’Hara was fascinated by Charlie. He was about the biggest man she had ever seen, heavily muscled from years of pushing steel, but he moved with uncanny grace. He was serious and quiet and not at all intelligent. Like all Devonites, he was completely hairless and always wore white; like most of them, he was a religious fanatic, in a quiet way.

They were total opposites, O’Hara being agnostic, intelligent, small, and not quiet. He seemed like a perfect man to start out with, since she did want sexual experience but didn’t want to complicate her life with a love affair.

She might have been forewarned if her otherwise liberal education had included a few ancient Claudette Colbert movies (“you big lug”). They fell for each other, hard, even before they went to bed together, which was not long postponed. After he had gently initiated her into the glorious mysteries of friction and spasm, they clung to one another like the opposite poles of strong magnets.

Related: 8 Books That Will Make You Fall for Hard Science Fiction

It was not going to have a happy ending. Charlie had to start fathering children by age twenty-three (he was twenty-one when they met), or sin by omission, and although O’Hara’s love was almost boundless, it could not encompass shaving her head and spending the rest of her youth manufacturing babies.

Of course, they tried to convert each other. Charlie listened to O’Hara’s arguments with grave respect, but she couldn’t penetrate his belief. O’Hara had less patience with Charlie’s arguments, but after hurting him twice, she kept her mouth shut. Eventually, she agreed to go with him to Devon’s World, even though the idea of a one-religion World gave her understandable premonitions of disaster. The only other one had suffered the fate of Sodom and Gomorrah.

Despite her protests, and their differences, Marianne fell for Charlie. Marianne is someone whose curiosity is endless, and she often gets herself into trouble because of her unguarded tongue. As an agnostic and logical young woman, Marianne looks at the big picture in most situations, and it's these qualities that end up serving her well as she explores the dark secrets that threaten the existence of planet Earth and the Worlds.