The comedian spins a spooky, action-packed web in his new book Don't Move. 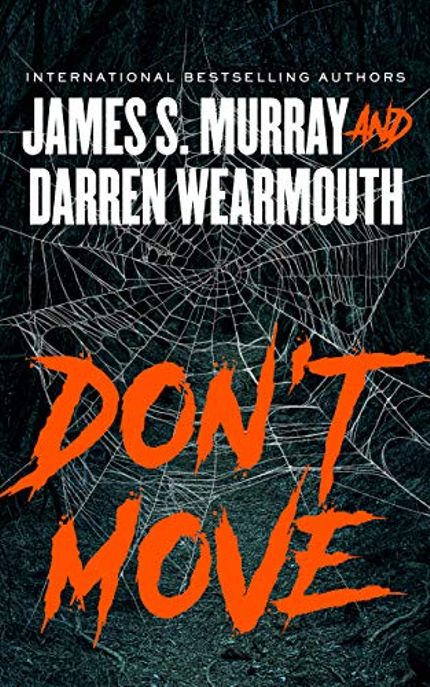 Don’t Move is the perfect book to read right now, in the Halloween season. I was wondering if you could talk about what Halloween as a holiday has meant for you personally over the years?

I grew up loving scary movies and all things Halloween. I mean, my favorite movies are Nightmare on Elm Street, Friday the 13th, Sixth Sense, Nightmare Before Christmas.

If you even look at the cover of Don’t Move, it has a retro ‘80s feel to it. The cover art for John Carpenter’s The Thing has the same font as Don’t Move. And that’s by design. It’s a little throwback to classic horror fans.

Both your [Awakened] series and Don’t Move tap into universal fears, like claustrophobia, arachnophobia. Are there any other omnipresent fears you are interested in exploring?

I think Don’t Move is very much a product of the time we’re living in. Obviously, we wrote it while in quarantine, and I recently moved to the suburbs and I am surrounded by woods. And so then to be locked in the house for seven months, I think that the book kind of absorbs that into its DNA.

This sense that we all have of isolation and fear of the unknown, which has become seeped into our daily life now for the past seven months. I think that's in the DNA of the book and our characters being in a situation that's out of their control and trying to control it.

Our female character– our lead protagonist – she has been, in her career, a master puzzle solver. She runs the country's largest distribution plant that distributes a third of all the meat, dairy, produce around the entire Eastern seaboard. It’s a massive operation. She's an expert at solving puzzles, but how does a character like this, when thrown into a situation that is so out of control, rise up and solve the ultimate puzzle to save her life?

And I think that's the feeling we all have right now, is this sense of isolation and being cut off from the rest of the world, which is so unusual to us.

Megan in Don’t Move has trauma from a family tragedy, and she is coping with that. I was curious what you think about using horror as a way to cope with or process real-life trauma?

I think it is very similar to using comedy to cope with it. I think it really is flip sides of the same coin. And I think all of our novels have a ghost of comedy in them as well.

One of my favorite movies is The Descent – which, if you haven’t seen it, you have to watch it –because the horror works on three different levels.

It's these five or six women that go cave exploring, and are faced with these kind of underground creatures that they have never encountered before. Which, by the way, we made fun of that scene in the Impractical Jokers Movie, when we dressed Joe like a cave monster.

That connection between horror and humor is super interesting. I was wondering how your experiences with improv have informed your writing process?

I think our writing style is greatly helped by comedy, by Impractical Jokers. On the TV show we interact with so many people. For the past decade we've done we’ve done 240 episodes of the show, and thousands of challenges, and because of that I think it makes my dialogue really good, because I have a good sense of how people speak. That’s what we do for a living, we improvise, we speak.

And then I think my background in TV development, you know for ten years I ran development for a TV company – the company that makes Impractical Jokers. And we pitched it through my job, and that's how we sold the TV show.

I think my background in TV development where I had to write – I have probably written 2,000 treatments over the past ten years for TV shows. And a treatment is all about ‘sizzle,’ it's about grabbing them from the start, and making it bulletproof, and keeping it exciting, and selling the hook of the show, and I think that that experience makes the writing style of our books – just the pace is relentless, it grabs you, it's interesting, the dialogue is good.

The way that I would describe it is our style is immensely readable. It's very readable.

We talked about the movies that inspired you. Are there any horror authors or books you were inspired by?

Michael Crichton. Jurassic Park, Andromeda Strain scared the hell out of me.

I love Dean Koontz. I love James Rollins, Brad Meltzer, and R.L. Stine I grew up reading, of course.

My favorite action thrillers, The Meg by Steve Alten. I read all those books that he wrote. And Stephen King, of course.

Is there anything else you’d like our readers to know about Don’t Move?

Gosh, let’s see. Don't Move is the perfect read for the spooky season. You’re going to sit down, and you are not going to be able to move once you start reading it. And there are little Impractical Jokers spoilers in the book if you read closely. Cool little inside jokes, for Joker fans.