This AI drama is deeply addictive.

When the world fundamentally changes, what good are the skills we've devoted ourselves to developing? Does our value to society diminish as we age? And what does intimacy look like in a world transformed? These existential questions loom large in the coronavirus era, and in the world of the TV show Humans.

This Channel 4/AMC series is based on the Swedish show Real Humans, and set in a near-future Britain where humans work and live alongside androids, or ‘synths.’ The complete three-season series is now available on Blu-ray for the first time, and is a riveting binge-watch that’s perfect for the age of quarantine. 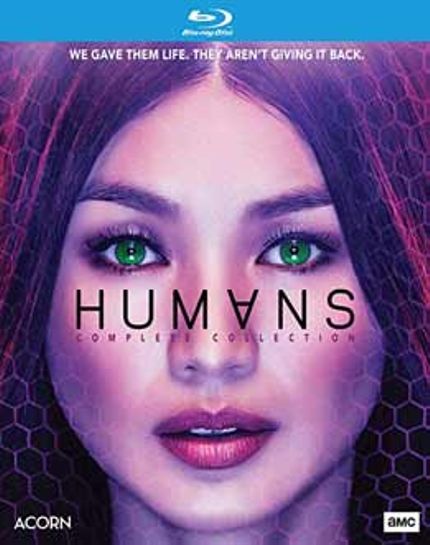 Want more TV recommendations? Sign up to get the best in sci-fi and fantasy sent straight to your inbox!

Synths are both a status symbol—one particularly affluent family has two of them!—and a public health tool. Social workers make home calls to ensure senior citizens' synths are up-to-date, and synths are tireless masseurs for the injured.

RELATED: 10 Books About the Robot Revolution to Read Before the Singularity

Although tech CEOs claim that synths free humans up to focus less on work and more on life itself, not everyone is a believer. The Hawkins family offers a compelling case study for this conflict.

Husband Joe (Tom Goodman-Hill) purchases synth Anita (Gemma Chan) to help care for their home and three children. When his wife Laura (Katherine Parkinson) returns from a business trip to discover Joe's addition to the household, she feels replaced.

Anita is gorgeous, poised, and unflaggingly maternal—she’s even better at bedtime stories than Laura. Laura’s dislike of Anita increases after strange occurrences in the home lead her to wonder if something is not quite right with the family’s synth.

RELATED: The A Discovery of Witches TV Show Is One Spell of a Good Time

Laura has an ally in her oldest child, Mattie (Lucy Carless). Mattie is technically skilled, but has stopped trying in school — what’s the point in studying when synths hold all the jobs? She channels her frustration into attempts to hack synths at her school, a charade that Laura sympathizes with, although she rejects Mattie’s belief that synths are just slaves.

The scenes of android-filled domestic drama at the Hawkins house are interspersed with Anita’s origin story. She’s one of many synths impacted by a mysterious consciousness program. Anita and her fellow sentient synths just want to live life on their own terms, but doing so is a revolutionary act that upsets the balance of the AI-dependent world.

Humans is obviously not the first sci-fi TV drama to consider the autonomy and identity of androids. Most recently, this territory has also been explored by HBO's Westworld.

But while Westworld takes a wide view of the robot revolution, Humans never loses its focus on the minutia, even when exploring the macro. The result is addictive TV that is reminiscent of Orphan Black, the cult BBC America series about a group of clones.

Like Orphan Black, Humans is lean storytelling that relies on the strength of its impressive performances to explore how revolutionary technology re-shapes society.

In Orphan Black, the star performance came from Tatiana Maslany, who transformed herself to play each of the series' clones. In Humans, Gemma Chan and the other synth-actors are the standout attraction. The actors attended ‘synth school’ with a choreographer to perfect the subtle facial tics (or lack thereof) that distinguish synths from humans, and the uncanny valley result is nearly as impressive as Maslany’s transformations for Orphan Black.

Humans grows increasingly complex and compelling in each of its three seasons. Season Two adds iconic Matrix actor Carrie-Anne Moss as Athena, a San Francisco-based developer tasked with reverse-engineering sentient synths like Anita. The show’s third and final season has a 100% score on Rotten Tomatoes, and critics praised Humans Season 3 for drawing “deeper insight from its sci-fi premise without diluting the potency of its well-drawn characters.”

Quarantine has changed how we feel about work, human interaction, and our bodies. In an era where nearly all interaction is conducted at a distance, Humans is an absorbing drama that offers distraction from our current crises, as well as a new way of considering the many questions raised by society’s quarantine recalibration.

Want more TV recommendations? Sign up to get the best in sci-fi and fantasy sent straight to your inbox!

This post is sponsored by Acorn. Thank you for supporting our partners, who make it possible for The Portalist to celebrate the sci-fi and fantasy stories you love.