Promoted by Acorn | By Carolyn Cox

Alchemy is the process by which everyday material is transformed into something precious. Whatever the alchemical processes involved in creating Deborah Harkness' book A Discovery of Witches and its subsequent British TV adaptation, the result was gold. If you want to get lost in a fantasy that's adult— in all the best ways possible — then you'll become addicted to Harkness' world.

In its first season of the Sky One TV adaptation, characters face dilemmas typical of adulthood (career setbacks, misunderstandings between family members, attraction to someone who is very bad for you) as well as serious magical threats. The complete first season is available to watch now, and is highly recommended for anyone craving a mature fantasy show that's both complex and super-fun.

RELATED: 13 Witch Books That Will Hold You Spellbound

Diana Bishop (Teresa Palmer) is a historian specializing in alchemy. She's visiting Oxford to conduct research in the Bodleian Library, and is on the verge of securing a highly-coveted professorship. Diana has a painful history which she left behind in America and is reluctant to face even now that she’s half a world away. Both of her parents were killed when Diana was young. As part of rejecting her traumatic past, she refuses to engage with an essential part of her identity: Diana is a witch.

In fact, the everyday world is full of witches of all stripes, as A Discovery of Witches explores to delightful effect. One particularly fun scene in the pilot shows a typical teacher sticking her head outside of a classroom, quickly conducting some coven business, then returning to her students. These ordinary details help ground the show's magical elements, and make the fantasy feel like it could happen to any one of us.

Want more magic? Sign up to get the best in sci-fi and fantasy sent straight to your inbox!

Diana identifies only as a historian, and is frustrated when other witches refuse to accept that she won’t practice. But when she accidentally uses magic to summon the ancient manuscript Ashmole 782, Diana’s research throws her into a world she’s tried hard to leave behind. In uncovering Ashmole 782, Diana upsets the delicate balance between witches, vampires, and demons. Suddenly, every non-mortal in Oxford has something to say to her—particularly 1,500-year-old Matthew Clairmont (Matthew Goode).

A super-suave vampire/biochemistry professor, Matthew has searched years for Ashmole 782. He believes the long-lost text contains valuable information about the vampire species, and he’s not afraid to scare Diana into helping him find answers.

Diana and Matthew have instant romantic tension. Although their magnetic attraction isn't surprising (of course a beautiful witch and a darkly-handsome vampire are going to have a spark) their will-they-won't-they dance is still gripping. The everyday-ness of the series also makes Diana and Matthew's romance particularly fun. We’ve all seen scenes where a male vampire watches his love interest without her knowing. But how many of those scenes have also shown the heroine online-stalking said vampire while he watches?

The familiarity of a lot of Diana’s life is what makes A Discovery of Witches so fun to get lost in. Who among us hasn't fought with a family member over their expectations for us, or Googled someone who gives off weird vibes? Because the majority of Diana's existence is so ordinary, when she starts accidentally awakening ancient magic and sparring with a biochemist vampire, her adventures allow viewers to feel they're escaping the everyday too. 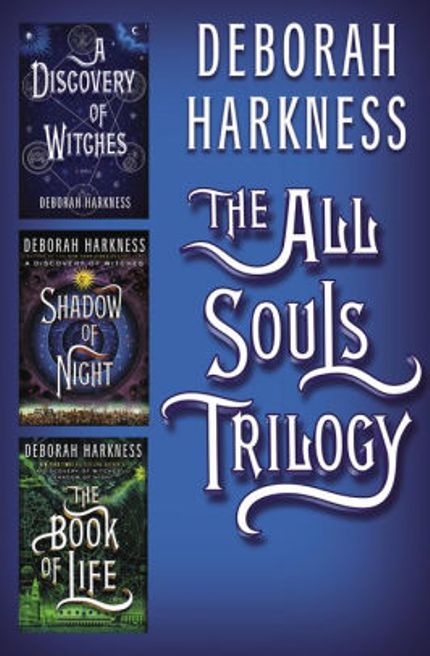 The series is based on the All Souls trilogy by Deborah Harkness, the three titles of which are A Discovery of Witches, Shadow of Night, and The Book of Life. Given Harkness’ own background, it’s not surprising that the world of academia in A Discovery of Witches feels so real. Harkness is a historian of science and medicine. Like her heroine Diana, she also studied alchemy and the occult, and even spent time at Oxford as a student. Harkness' authoritative knowledge on science and magic also means that much of the fantasy's mythology is grounded in fact. For instance, as io9 explains, Ashmole 782 was a real manuscript that actually went missing in 1697.

Although the show is absolutely accessible for viewers who aren’t familiar with Harkness’ work, it’s also a treat for book-readers to see Harkness' world come to life. The dynamic between Diana and Matthew is particularly vivid on the small screen. It’s one thing to read Diana and Matthew’s banter on the page, and another entirely to witness their romance against the gorgeous visual backdrop of Europe. On that last note, A Discovery of Witches might be the most flat-out beautiful new fantasy series since Game of Thrones. The first season is an embarrassment of visual riches, from the River Cherwell at dawn to the verdant hills outside a French castle.

RELATED: The Best Fantasy TV Shows for When You Need to Escape Reality

The debut season of A Discovery of Witches was Sky One’s most popular drama of the year, so it's no surprise the series has been renewed for two more seasons. The upcoming seasons will follow the events of Shadow of Night and The Book of Life, respectively. Season 2 is set to debut in 2020, so now is the perfect time to get caught up on the existing episodes of the season. If you love fantasy romance that combines realistic, recognizable protagonists with incredible magic, then you'll strike gold with A Discovery of Witches.

Want more magic? Sign up to get the best in sci-fi and fantasy sent straight to your inbox.

This post is sponsored by Acorn. Thank you for supporting our partners, who make it possible for The Portalist to continue publishing the stellar stories you love.

Promotional still from "A Discovery of Witches" via Sky One