Everything You Should Know About the Fire and Blood Book

"Madness and greatness are two sides of the same coin."

When the Targaryen’s took Westeros, it was with the fire of their dragons and the blood of their conquest. Those events shaped the kingdom for generations to come, setting bloodlines down the path leading to the A Song of Ice and Fire book series.

Many of these events, like the Doom of Valyria, Aegon’s conquest, and the Dance of the Dragons are referenced throughout the saga we know as HBO's Game of Thrones. And now fans are about to journey back through time. We'll relive these events ourselves via the Game of Thrones prequel series, House of the Dragon, which will premiere August 21, 2022.

The show will largely follow events from George R.R. Martin's book Fire and Blood, the first of a two-part detailed history of House Targaryen. We consulted Archmaester Gyldayn and compiled everything you need to know about the Fire and Blood book. 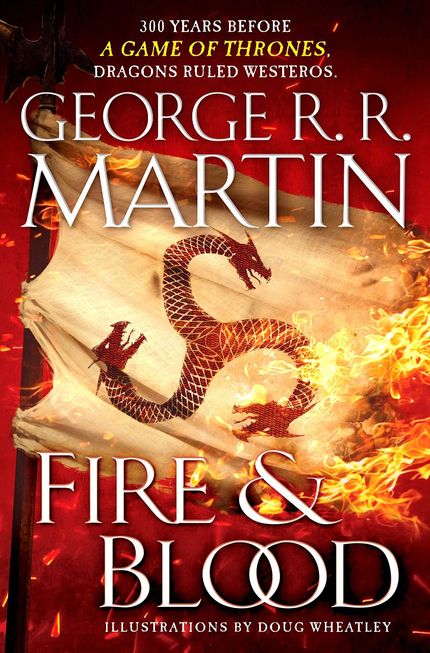 Before there was an Iron Throne, House Targaryen was a minor dragon lord family in Old Valyria, a powerful kingdom in Essos. A dream inspired their move to the edge of the kingdom. While the other forty families mocked and scorned them, Targaryen was the only house to survive when the Doom destroyed the land.

It took another 100 years before Aegon I set out with his two sisters to conquer the Seven Kingdoms, and it’s with those events that the book begins. Over the next 300 years, House Targaryen ruled the Realm they created on the Iron Throne they forged. For the next century, five kings followed Aegon, and the book ends with the violent tumult that led to the civil war known as the Dance of the Dragons.

Interestingly, the show will begin with the end of that war. This event led to the crowning of the seventh Targaryen ruler in Westeros, and was a catalyst that arguably sparked the beginning of the end of their reign.

Want more Westeros? Sign up to get the best in fantasy sent straight to your inbox!

One of the most prominent dragons introduced in Fire and Blood is Balerion, aka the Black Dread, the only dragon who lived in Old Valyria. After the Targaryen’s move to Dragonstone, more dragons are hatched there. Since this is the history of the house of dragon riders, there are a lot of dragons introduced and described in the book, including some of the riderless dragons and the dragons present for the violent Sowing of the Seeds trials.

In House of the Dragon, fans can likely expect to see Caraxes, Daemon Targaryen’s red dragon (aka The Blood Wyrm); Rhaenyra’s yellow-scaled Syrax; Laenor’s fearsome Seasmoke; and the Red Queen’s Meleys. It’s unclear if we’ll see the legendary Balerion, but it’s possible. And of course, there will likely be numerous other dragons, as the battle between Targaryens will be fought more with dragon fire than swords.

The A Song of Ice and Fire books are a multi-faceted story that follows multiple characters as they vie for the throne. Before House Baratheon overthrew the Mad King, there had only ever been Targaryen blood on the Iron Throne. Fire and Blood chronicles the first half of this long Targaryen reign. Though the focus is primarily on their history, there are plenty of glimpses into the rest of the Seven Kingdoms and the houses that rule throughout the story.

In Fire and Blood, readers learn the origins and the lineage of the three eggs that ended up in Daenerys’ possession, which is a fun Easter egg for Game of Throne fans. We also learn that during this era dragons were not able to cross the wall.

What we don’t know is if the Night King was alive at the time, since Daenerys was the first Targaryen to confront him. Perhaps the magic he wove through his undead army allowed dragons to cross the wall during the events of Game of Thrones. There are also scintillating details about House Baratheon, but we’ll leave those spoiler-free.

The show is said to begin about halfway through the events of Fire and Blood, during a period in which the question of succession becomes deadly. Here is where Game of Thrones fans will find familiar footing through the politics, maneuvering, and machinations of the characters. If anything, these aspects will likely come across as more intense than in the original show. This is Targaryen against Targaryen with dragons as weapons, and nothing is more bloody than civil war among family.

The series will lay foundations for the houses viewers are familiar with, and will establish how family dynamics were wrought. For instance, we'll witness the Doom of Valyria and perhaps learn the origin of the dagger that eventually kills the White Walker.

Though the Targaryen’s ruled for over 300 years, Fire and Blood is only the first half of their history, and ends with a violent family conflict. House of the Dragon will bring this bloody time to life, and tie in answers to questions that Game of Thrones fans have had ever since the show ended. The book gives a detailed account of how the house rose, and the second book will likely chronicle the house's fall.

Fans of both the novels and the original show will revel in the details that provide a fuller, richer context to view the Seven Kingdoms and the lands beyond its borders. Fire and Blood weaves a vivid story that brings the history of Westeros to life in new and fascinating ways. We anticipate House of the Dragon will do the same, tying together the present story with the past and potentially paving the way for the future.

Want more Westeros? Sign up to get the best in fantasy sent straight to your inbox!