The Magical Sequel to Caraval Will Leave You Breathless

Promoted by Flatiron Books | By Sarah Mangiola | Published May 1, 2018

In Caraval, which was nominated for the 2017 Goodreads Choice Award for Debut Author, we met the Dragna sisters: Scarlett and Donatella (Tella, for short). Scarlett had always wanted to see the supposedly once-a-year performance of Caraval, in which the audience participates. But when she finally got the chance, the organizer, Legend, kidnapped Tella—making whoever found her first the season’s winner.

Together with the mysterious (and irritatingly charming) Julian, Scarlett competed to find Tella and win the season's extremely coveted prize: a wish. But when you're in Caraval, you're never quite sure what's actually happening...and what's pure magic. During the game, Tella made a deal with a mysterious criminal in order to survive…and now, in Legendary, it’s time to pay up.

The bargain? Tella must bring him Legend’s real name—something no one has ever been able to do. Though Caraval has just ended, another one is about to begin, and in order to keep her end of the arrangement Tella dives head first into the competition—this time, willingly.

As Tella is thrown deeper and deeper into this mysterious, immersive game, she’ll be forced to consider what she’s willing to lose…including her heart. The line between what is real and what’s just part of the performance becomes increasing blurred, leaving Tella to wonder: Is it really only a game?

Stephanie Garber's stunning sequel combines magic, romance, and mystery to bring readers a book they won't be able to put down. A story that seamlessly tackles tough subjects—including parental manipulation and abuse—while focusing on sisterly love, romantic entanglements, and mysterious intrigue, this series is an exceptional addition to the genre.

Read on for an excerpt from Stephanie Garber’s enchanting new story, and then download the book. 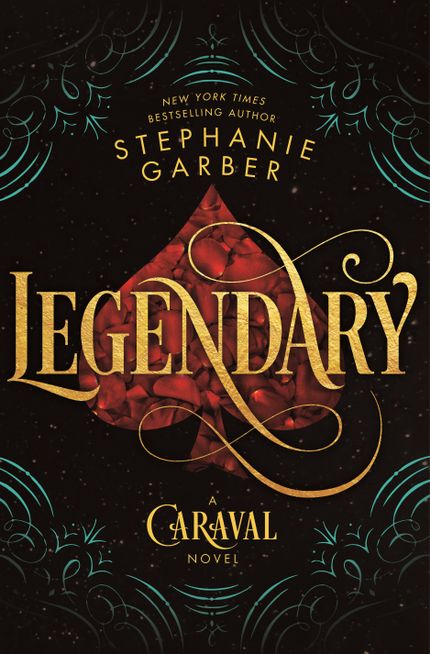 It had been seven years since Tella and Scarlett’s mother, Paloma, had disappeared. There was a period of time that started about a year after her mother left, when Tella preferred the idea of Paloma being dead. If she was still alive, Tella reasoned, she’d made the choice never to return to her daughters, which meant she couldn’t have really loved them. But if Paloma was dead, then maybe she’d intended to return, but had never been given the chance; if she was dead, it was possible she’d still loved Scarlett and Tella. So for years Tella clung to the hope that her mother had met death, because no matter how hard Tella tried, she could not stop loving her mother, and it hurt too much to imagine that her mother didn’t love her back. Tella pulled out the letter she’d received from her friend. Scarlett had left to tell Julian they’d go with him to Valenda. But Tella didn’t know how long she’d be gone, so she read swiftly.

The aching in Tella’s head returned, and this time it had nothing to do with the drinks she’d consumed the night before. She couldn’t shake the sense something was missing from the letter. She swore there’d been more to it when she’d read it at the party.

Tella held the message to the butterscotch light streaming through her window. No hidden lines of script appeared. No words shifted before her eyes. Unlike Legend, her friend didn’t lace his letters with magic tricks, but she often hoped he would. Maybe then she’d be able to confirm his identity.

She’d first contacted him more than a year ago, to help her and her sister escape from their father. But Tella still had no idea who her friend was. For a while she had wondered if her correspondent was actually Legend. But her friend and Legend could not be the same person—the payment her friend referred to made Tella certain of that.

Related: SNEAK PEEK: Children of Blood and Bone Is Your Next YA Fantasy Obsession

She still needed to acquire this payment. But now that she and Scarlett were going to Valenda with Legend’s players, Tella felt more confident she would. She had to.

Her pulse danced faster as she hid her friend’s letter and opened her smallest trunk—the one she’d not allowed the players to rifle through during Caraval. She had filled it with money pilfered from her father. But that was not the only treasure it concealed. The interior was lined with an unappealing burnt-orange and lime-green brocade that most people would never look at closely enough to notice the slit along the edge of it, which allowed her to hide the catalyst for this entire situation: The Aracle.

Tella’s fingers tingled as they always did when she pulled out the wicked little card. After her mother disappeared, her father had gone mad with rage. He’d not been a violent man before, but when his wife left him, he’d changed almost instantly. He’d thrown her clothes in the gutter, turned her bed into firewood, and burned everything else into ash. The only items that had escaped were the scarlet earrings Paloma had given to Scarlett, the raw-fire opal ring that Tella had stolen, and the uncanny card in Tella’s hand. If she’d not taken this card and the ring right before her mother left, Tella would have had nothing to remember her mother by.

Related: 8 Fantasy Romance Books That Are Sure to Satisfy

The opal ring had shifted color shortly after her mother’s disappearance, turning fiery red and purple. The edges of the Aracle card were still made of molten gold, but the image in its shimmering center had changed as well, countless times. Tella hadn’t known what it was when she’d first stolen it from her mother’s Deck of Destiny. Even days later, when she’d looked in the mirror and seen fat tears streaming down her cheeks—re-creating the image the Aracle had first revealed—Tella didn’t piece it together. It wasn’t until more time went by that she noticed that when the Aracle revealed an image, it always came to pass.

At first the images were inconsequential: a maid trying on Tella’s favorite gown; her father cheating at cards. Then the visions of the future grew more upsetting, until one day, immediately after Scarlett’s engagement to the count, Tella saw a most disturbing image.

Scarlett was dressed in a snow-white wedding gown, studded with rubies and petals and whisper-thin lace. It should have been beautiful. But in the Aracle’s vision, it was stained with mud and blood and tears as Scarlett sobbed violently into her hands.

The horrid image remained for months, as if the card were asking Tella to prevent her sister’s arranged marriage and change the future—not that Tella needed prodding. She’d already been forming a plan for her and her sister to run away from their controlling father, one that involved Legend and Caraval. Tella knew if anything would tempt her risk-averse sister to take a chance at another life, it would be Caraval. But Legend wouldn’t respond to any of Tella’s letters, just as he’d never responded to Scarlett’s.

Want more fantasy series? Sign up for The Portalist's newsletter and get our recommended reads delivered straight to your inbox.

The image on the Aracle incited Tella to search for more information about Legend. There were wild rumors Legend had killed someone during a game years before, and Tella hoped finding out more about that would convince him to pay attention to her.

To fuel her search, Tella collected on every favor she was owed until she’d been told to write to an establishment called Elantine’s Most Wanted. It was supposedly a business in the Meridian Empire’s capital city of Valenda. No one ever told her exactly what sort of business it was in. But after Tella asked for information about Legend, the shop responded with a message that said:

We’ve found a man who’s agreed to help you, but be warned, he often requires payments that involve more than money.

When Tella wrote back to ask for this man’s name, the man himself simply replied:

It’s best if you don’t know. —A friend

Tella always took this response to mean her friend was a criminal, but he’d been a faithful and clever correspondent. The information he’d provided about Legend was not what she’d expected, but using it, Tella had written to Legend again and pleaded for his help.

She succeeded this time. Legend replied to Tella, and as soon as he agreed to help her and her sister escape their father, the Aracle changed from Scarlett in a wrecked wedding gown to Scarlett at a lavish ball, in a gown made of rubies that drew the eye of every suitor she walked by. This was the future Tella wanted for her sister, full of glamour, celebrations, and choices.

Unfortunately, a day later the vision was replaced by another glimpse of the future that had not changed since.

Related: You Need to Read Sarah J. Maas' A Court of Thorns and Roses

Tella didn’t know if the enchanted card would show the same awful picture today; after everything that had happened during Caraval, she hoped that perhaps it had changed.

But the image hadn’t shifted.

All the air and hope fled Tella’s lungs.

The card still showed her mother. She looked like a battered version of the Lady Prisoner, depicted in Decks of Destiny, covered in blood, and caged behind the harsh iron bars of a dim prison cell.

This was the future that had prompted Tella to make another request of her friend and ask him if he could also help find her mother. Tella’s previous searches for Paloma had led nowhere, but her friend, who was not bound to a backwater island like Tella, clearly had better ideas and methods of how to search.

She had memorized his reply by heart.

This post is sponsored by Flatiron Books. Thank you for supporting our partners, who make it possible for The Portalist to continue publishing the enchanting stories you love.