Get a sneak-peek at the latest YA fantasy novel from this acclaimed author.

Patrick Ness, the award-winning author of A Monster Calls, delivers yet another hit with his latest young adult fantasy novel, Burn, out June 2nd.

Set against the backdrop of Cold War America, Burn explores prejudice, extremism, and propaganda through an accessible fantasy lens. He is at his best in this stunning tale filled with folklore, bravery, and — of course — hope.

In true Ness fashion, the novel takes place in our familiar world, with a major fantastical twist: Dragons are real, and one of them is on his way to work at Sarah Dewhurst's family farm in 1950s Frome, Washington.

In the excerpt below, Sarah and her father prepare for the arrival of their new dragon. 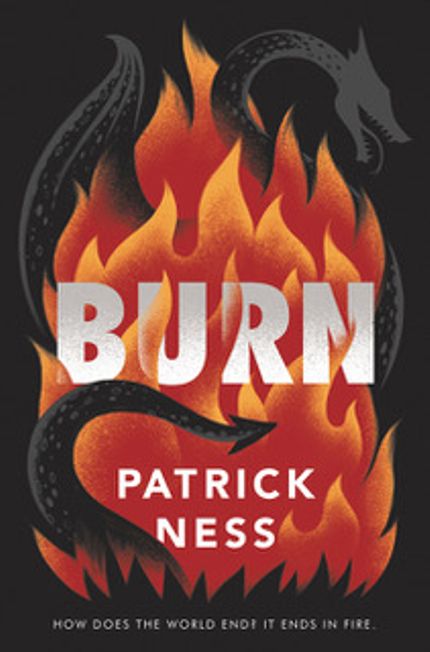 ON A COLD Sunday evening in early 1957—the very day, in fact, that Dwight David Eisenhower took the oath of office for the second time as President of the United States of America—Sarah Dewhurst waited with her father in the parking lot of the Chevron gas station for the dragon he’d hired to help on the farm.

“It,” said her father, spitting on the oiled dirt, hitting the cracks of a frozen puddle. “Don’t call it by its name. Don’t tell it yours. It. Not he.”

This didn’t address the question of the dragon’s lateness. Or maybe it did, in her father’s sternness, in the spitting.

“It’s freezing out here,” she said.

“You’re the one who was so eager to come with me.”

Then why are you hiring one? Sarah thought, though knew better than to say. She even knew the answer: They couldn’t afford to pay men to clear the two south fields. Those fields had to be planted, and if they were, then there was a chance—a small one, but a chance—that they wouldn’t lose the farm to the bank. If a dragon spent a month or so burning the trees, carrying out the ash and remnants, then maybe by the end of February, Gareth Dewhurst could be turning the charcoal over with a pair of cheaply hired horses and the plow that was thirty years out of date. Then perhaps by April, the new fields would be ready for planting. And perhaps that would be enough to hold off the creditors until harvest.

Such had been the overwhelming, exhausting thought of both Sarah and her father in the two years since the death of her mother, as the farm slid slowly beyond the ability of two people to run and further and further into debt. The worry was so strong it had shoved their grief to one side so they could work every hour her father was awake and every hour Sarah was not at school.

Sarah heard her father breathe out, long, through his nose. It was always his preamble to softening.

RELATED: 11 Young Adult Fantasy Books to Cast a Spell on Readers of All Ages

Want more dragons? Sign up to get the best in sci-fi and fantasy sent straight to your inbox!

“You can drive home,” he said, quietly, back over his shoulder.

“What about Deputy Kelby?” she asked, her stomach tensing as it always did at the thought of Deputy Kelby.

“Do you really think I’d be meeting a hired claw if I didn’t know Kelby was off duty tonight? You can drive.”

She was five feet behind him but still hid her smile. “Thanks, Dad,” she said. At nearly sixteen, she was a few months shy of being granted a license by the great state of Washington, but a lot of things got overlooked for the sake of farming. Unless it was Deputy Kelby doing the looking. Unless you were Sarah Dewhurst being looked at, with her skin so much darker than her father’s, so much lighter than her dearly departed mother’s. Deputy Kelby had thoughts on these issues. Deputy Kelby would be only too happy to find Sarah Dewhurst, daughter of Gareth and Darlene Dewhurst, illegally behind the wheel of a farm truck, and what might he do then?

Sarah pulled her coat tighter around her, tying the belt. It was her mother’s coat and she was already outgrowing it, but not by enough to find the money for a new one. It strained across her shoulders, but at least it kept her warm enough. Almost.

As Sarah put her hands back in her pockets, she heard wings.

They were an hour from midnight—the Chevron was closed, only security lights on—and the sky was bitter cold and sloppy with stars, including a spill of the Milky Way across the middle. This part of the country was famous for its rain, though more accurately for its endless gray days. This night, though, January 20, 1957, was clear. The three-quarter moon was low in the sky, bright but a supporting player to the specks of white.

Specks of white that now had a shadow cast across them.

“It won’t hypnotize you,” her father said. “That’s an old wives’ tale. It’s just an animal. Big and dangerous, but an animal.”

“An animal that can talk,” she said.

“An animal without a soul is still an animal, no matter how many words it’s learned to lie with.”

Men didn’t trust dragons, even though there had been peace between the two for hundreds of years. Her father’s prejudice wasn’t uncommon among people his age, though Sarah wondered how much sprung from the way the articulate, mysterious creatures so comprehensively ignored men these days, save for the few willing to hire themselves out as labor. In Sarah’s generation, though, it was hard to find a teenager who didn’t also want to be one.

This particular dragon was flying in from the north, which Sarah liked to think meant it had come from the great dragon Wastes of western Canada, one of the few natural landscapes left in the world where dragons still flew wild, still held their own societies, still kept their own secrets. She knew this was fanciful. Canada was nearly two hundred miles away, the Wastes a further two hundred beyond that. Besides which, the Canadian dragons had withdrawn official communication with men a decade before Sarah’s father was born. Who knew what they got up to in the Wastes these past fifty years? The individuals who still hired themselves out as labor gave no answers, if they even knew. This one was probably only coming from another farm, another place of grubby, poorly paid hire.

It flew over them.

He, thought Sarah. He flew over them. The only reason she didn’t think She was because her father had slipped when he first mentioned the hiring. “It’s not illegal,” he’d said, which Sarah knew, “but there’ll be trouble no matter what. We keep quiet until he’s already working and no one can stop him.”

Sarah was unsure what had happened in the intervening week to move so firmly from he to it.

Beyond the light of the gas station, the dragon remained a silhouette as it circled, but even so, Sarah was surprised by its size. Fifty feet from wing tip to wing tip, possibly sixty.

The dragon was small.

They watched it fly over them once more, then take off again into the sky. This meeting place wasn’t so surprising, nor was the hour. Enough light and civilization to make the man feel safe, enough darkness and lack of other humans to make the dragon feel the same, what with everything her father had rightfully said about potential trouble. Even so, this dragon was clearly more cautious than most of its kind.

When it finally landed, she saw why. She also saw why it was so small.

When it finally came into the light, she saw it only had one eye. The other was scarred over, indeed seemed to have rope-like stitching holding it shut. The surviving eye led the rest of its body toward them until the dragon stopped and inhaled two big gusts of breath. Sarah knew it would do this. Their noses were sharper than a bloodhound’s. It was rumored they could smell more than just odor, that they could smell your fear or if you were lying, but this was probably the same old wives’ tale about them being able to hypnotize you.

“You are the man?” it said. The words rumbled from so deep in its chest that Sarah almost felt rather than heard them.

“Who else would I be?” her father replied, and Sarah was surprised to hear a buried note of fear there. The dragon’s eye narrowed in suspicion. It clearly didn’t understand her father’s answer, something her father saw as well. “I am the man,” he said.

The dragon looked him up and down, then cast its eye over Sarah.

“He’s blue,” she said, breaking several of the rules her father had set down.

“I won’t tell you to hush again,” he said, not turning around, or his eyes were only on the dragon now.

The dragon was blue. Or a blue, Sarah corrected herself, and of course, not actual blue but the blue of horses and cats, a dark silvery gray that tinged into blue in the right light. What he was not was the burnt blackish red of the Canadian dragons she’d occasionally seen working farms or flying over the mountains in the distance, making their trips to who knew where for who knew what purpose.

But a blue. A blue was Russian, at least originally, in heritage. They were very rare; Sarah had only seen them in books and was more than a little surprised she hadn’t heard any local rumors of this one. A Russian dragon was also troubling for other reasons, what with Khrushchev, the Premier of the Soviet Union, threatening to annihilate them pretty much every week these days. Dragons didn’t get involved in human politics, but having this dragon on their farm wasn’t going to make the Dewhursts any new friends either.

It had landed just outside the ring of light from the gas station sign, the ring of light Sarah and her father stood well inside. The ground hadn’t shaken when the dragon settled—a gingerly step to the dirt from the air as it stopped its glide—but it did shake as the dragon came forward now, its head and long neck angling down low, the claws at the end of its wings hooking into the ground at each step, those great wings flaring on either side, making itself look bigger, more threatening.

Sarah is warned against taking any real interest in their hired dragon Kazimir, but she finds herself intrigued by him, and his insistence on protecting her. Kazimir had an ulterior motive behind coming to the farm — and Sarah is about to find herself in the center of an age-old prophecy.

A complex and engaging mix of genres, themes, and narratives, this powerful and mature story will move readers of all ages.

Want more dragons in your life? Sign up to get the best in sci-fi and fantasy sent straight to your inbox!

This post is sponsored by Quill Tree Books. Thank you for supporting our partners, who make it possible for The Portalist to celebrate the sci-fi and fantasy stories you love.