This kaiju-filled series from the co-creator of Godzilla is a creature feature that still delights.

In 1963, Eiji Tsuburaya was looking to do something different. The Japanese special effects pioneer had risen to international fame as one of the co-creators of Godzilla, the most recognizable kaiju on either side of the pond.

(For those new to the term, kaiju is a Japanese word that literally translates to “strange beast,” but has come to describe the giant monsters like Godzilla, Gamera, and others that are so ubiquitous in Japanese cinema.)

Tsubaraya wanted to break away from working exclusively on special effects for movies by studios like Toho, with whom he had produced many of the early Godzilla films. He saw the growing popularity of television in Japan as a way to create something uniquely his own. He opened his own studio, Tsuburaya Productions, in 1963 and approached the Tokyo Broadcasting System (TBS) with the idea that would eventually become Ultra Q.

To understand the impact of Ultra Q, which premiered on TBS in 1966, we have to discuss Ultraman and the Ultra series, which has run continuously for more than half-a-century.

The character of Ultraman – a benevolent alien who bonds with a human host in order to combat threats both extraterrestrial and otherwise – is familiar to many American audiences, even if they haven’t ever seen any of his shows.

The first Ultraman series premiered in 1966, just two weeks after the debut of Ultra Q, and became one of the most popular TV series in the world. Ultraman would later appear in syndication all over the globe, and there have been more than thirty installments in the Ultra series since the shiny silver hero’s first appearance.

Ultraman was, initially, a way for Tsuburaya to meet the demands of TBS. The network wanted a show that was more easily marketable than Ultra Q, and that cashed in on the growing demand for kaiju in Japanese TV and cinema. Specifically, they wanted a show with a kaiju hero. Hence, the character of Ultraman was born.

Want more geek deep dives? Sign up to get the best in sci-fi and fantasy sent straight to your inbox.

While Ultraman shares traits with characters from the pages of American comic books, Ultra Q was inspired by another Western source – shows like The Twilight Zone and The Outer Limits.

Originally pitched as Unbalanced, the title Ultra Q, which would, in turn, influence the titling of the entire Ultra series, was chosen because of the gold medal-winning Japanese men’s gymnastics team from the 1964 Summer Olympics.

RELATED: 20 Most Fascinating Sea Monsters from Mythology and Fantasy

Specifically, Tadao Uesako, a member of a committee dedicated to “strengthening gymnastics in Japan,” referred to the techniques used by the gymnasts as “Ultra-C,” with “C” being the highest level of difficulty for a gymnastics routine at the time.

The “Ultra” prefix became popular in Japan, and was ultimately affixed to Ultra Q, with the “Q” standing in for “question.”

Though the show was eventually eclipsed by its more flamboyant sibling – unlike Ultra Q, Ultraman was shot in color, and jammed rubber-suited monster battles into every episode – it was extremely popular at the time, and has since experienced several reboots and a 1990 feature film in Japan.

Ultra Q was licensed for syndication in the United States but never actually made it onto U.S. airwaves, in part because it was filmed in black-and-white at a time when most American television shows were making the switch to color.

So, for the average American viewer, Ultra Q was not available until recent releases on DVD (from Shout! Factory) and Blu-Ray (from Mill Creek, who have also licensed most of the Ultra series, and are releasing it onto Blu a bit at a time). 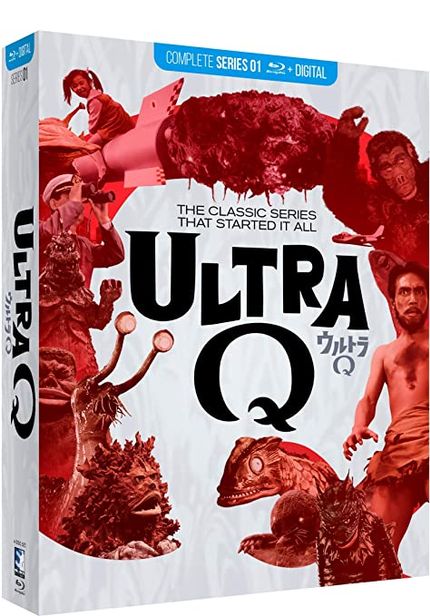 As Japan’s first horror/sci-fi anthology series, Ultra Q is a must-watch for fans of shows like The Twilight Zone and The Outer Limits – not to mention those interested in the history of the kaiju phenomenon – but it is also something else.

Unlike the American shows it was aping, Ultra Q prefigured popular series like The X-Files and Kolchak: The Night Stalker.

Every episode of Ultra Q featured the same handful of protagonists – two pilots, a newspaper reporter, and occasionally a scientist or two – trying to puzzle out whatever mysterious phenomenon was at the episode’s center.

These phenomena ranged pretty widely. Some episodes were focused on the antics of children and came across as almost parodic, such as the episode that introduced the money-eating monster Kanegon, which was later repurposed for Ultraman.

Others bordered on horror, such as “Baron Spider"; dealt with espionage (“The Statue of Goga”); or would have been right at home in an episode of the original Twilight Zone, such as the phantom train in “Open Up.!”

Most of the episodes involved a monster of some sort. Often, these monsters were suits borrowed from Toho’s prop warehouse and redressed for the show.

A Godzilla suit was converted into the monster Gomess in the show’s first episode, while a King Kong suit became the giant ape Goro. Others were designed exclusively for the series, and were later reused in other Ultra shows, such as audience favorite Garamon, who became Pigmon in Ultraman.

Ultra Q kept viewers on their toes, however. While the kaiju-centric episodes were the most popular with viewers at the time, the show mixed them up with other kinds of stories, such as the eerie “Devil Child” episode, which dealt with astral projection.

There are a lot of ways for a modern viewer to enjoy Ultra Q. For fans of Ultraman and kaiju movies, it serves as a time capsule of how things began.

For those who’re drawn to the thoughtful science fiction of Twilight Zone or The X-Files, Ultra Q combines Tsuburaya’s special effects genius with more grown-up themes. And for anyone who loves mystery, monsters, plucky heroes, and that unmistakable radiance of old black-and-white television, Ultra Q delivers.

“My heart and mind are as they were when I was a child,” Tsuburaya once said of his work. “My wish is only to make life happier and more beautiful for those who will go and see my films of fantasy.” He brought this same wish to the small screen, and it’s seldom more evident than in the best episodes of Ultra Q.

Want more geek deep dives? Sign up to get the best in sci-fi and fantasy sent straight to your inbox!