The Unwilling Is a Sumptuous and Uncompromising Adult Dark Fantasy

Kelly Braffet’s first fantasy novel The Unwilling is a richly-imagined saga set in a world that is just as brutal as it is beautiful. In other words, it's not for the faint of heart.

The Unwilling follows Judah, an outcast within the walled royal city of Highfall. More than two decades ago, a midwife brought baby Judah along to the birth of the royal son. After the birth of Highfall heir Prince Gavin, the queen took pity on Judah and chose to raise the two babies together, with Judah as Gavin’s foster sister. But the queen’s act of mercy has unexpected repercussions for the kingdom, and for Judah herself. 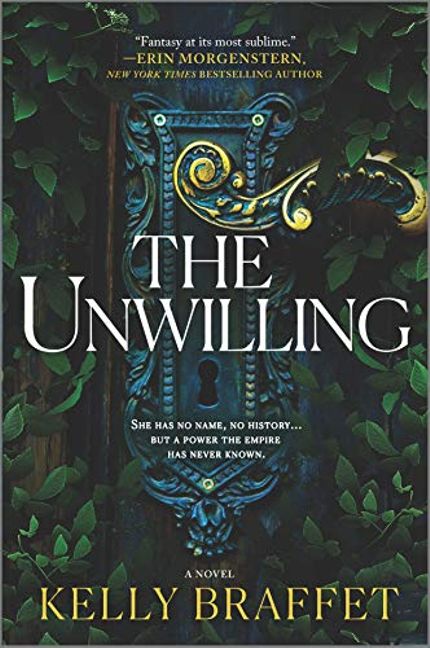 Judah is not like the other royal children. Her wild, blood-like hair and unusual features mark her as a foreigner from an unknown land, and the palace gossip whispers that Judah is a foundling witch who caused the queen’s death.

Judah and her foster-brother Gavin also share an unbreakable link, one that infuriates Gavin’s father, the ruthless Lord Elban. When Gavin or Judah is injured, they both feel the pain as if it is their own. If Judah’s leg is burned, Gavin screams. When Gavin’s leg is battered by a broadsword during military training, Judah shares his agony.

Their inexplicable psychic connection means that Judah is too valuable to Gavin for Elban and his lackeys to kill. Despite cruel rumors about her heritage and abilities, Judah is allowed to stay alive, but secluded within the walls of the rambling Highfall castle.

Judah is given no clue about the people she was taken from as an infant, even when Lord Elban seeks answers outside Highfall for how to sever the connection between his son and the foundling.

Through brutal training, Gavin and Judah have learned to keep their bond a secret. But now that they have entered their twenties, the consequences of their connection are more complicated than ever.

The leaders of Highfall desperately hang on to tradition, even as its state dinners are lit for the first time by sulfur lamps, and old sections of the castle crumble into dead ends. Meanwhile the Slonimi, a nomadic people whose culture revolves around protecting magical powers called ‘The Work,' are on the eve of fulfilling an incredible prophecy. Their story is wound with Judah’s in this luscious dark fantasy.

Prior to The Unwilling, Braffet was known for eerie thrillers like Last Seen Leaving, in which a troubled young woman wrecks her car after a night of drinking then disappears into a new life; or Josie and Jack, in which sibling dysfunction descends into utter mayhem. In Braffet’s first fantasy novel, she brings the keen eye for human desire and deprivation seen in her thrillers to a vividly-imagined realm.

Night Circus author Erin Morgenstern has praised Braffet's first fantasy novel as "familiar yet utterly unique [...] the sort of story that seeps under your skin and pulses there, intimate and vibrant and alive.’’ That familiarity may be due in part to the inspiration behind Braffet’s story.

In an essay for John Scalzi's website, Braffet wrote that she initially began The Unwilling decades ago, during a period of depression in college. A broken-hearted Braffet was grieving the end of a relationship and isolated in a particularly Gothic college dorm. Torn between others' expectations for her and her own desires, Braffet escaped into the world of Highfall, imaging a land where draconian dictates are beginning to crumble.

Braffet’s collegiate angst and questioning is a near-universal experience. The Unwilling taps into that common yearning, for an end result that's unsettling and spectacular.

Ultimately, the immersive world of The Unwilling is like if Mervyn Peake’s Gormenghast books had a child with Robin Hobb’s Realm of the Elderlings series.

Like Peake’s Gormenghast kingdom, the secluded Highfall castle is populated by an older generation desperately trying to maintain their grip on the status quo while their heirs imagine life outside the crumbling castle.

Similar to Robin Hobb and her beloved Realm of the Elderlings books, Braffet clearly has empathy for her characters. But although she judges them gently, the world around her protagonists doesn't pull punches. Some of the most harrowing and compelling aspects of The Unwilling explore Judah's reality as a vulnerable female outsider within the scheming Highfall court.

If you are prepared for a fantasy epic that's vivid, disquieting, and absolutely unforgettable, The Unwilling is an absorbing adventure that's ready to be discovered.

This post is sponsored by MIRA Books. Thank you for supporting our partners, who make it possible for The Portalist to celebrate the sci-fi and fantasy stories you love.