All Graham wanted to do was get some rest. But while he was sleeping, the world changed forever.

In The Sleeper Awakes, a dystopian classic from sci-fi luminary H.G. Wells, the British protagonist Graham takes medicine for his insomnia, and falls into a sleep so deep it lasts for centuries. When Graham wakes, it's 2100 and the world as he knows it is gone.

Read on for an excerpt from Wells' tale of a callous, corrupt society thrown into chaos by the awakening of Graham, the mysterious sleeper. And take advantage of our limited-time offer to download the book for free!

Download a FREE copy of H. G. Wells' dystopian sci-fi classic The Sleeper Awakes when you sign up for The Portalist newsletter! 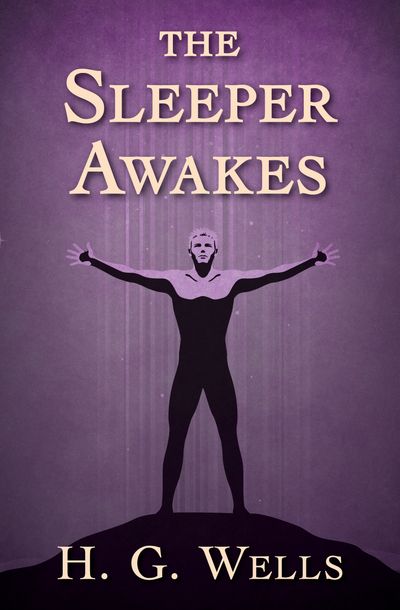 Graham’s last impression before he fainted was of the ringing of bells. He learnt afterwards that he was insensible, hanging between life and death, for the better part of an hour. When he recovered his senses, he was back on his translucent couch, and there was a stirring warmth at heart and throat. ”

“Remote but insistent was a clamour of bells and confused sounds, that suggested to his mind the picture of a great number of people shouting together. Something seemed to fall across this tumult, a door suddenly closed.

Graham moved his head. “What does this all mean?” he said slowly.

He saw the red-haired man who had been first to discover him. A voice seemed to be asking what he had said, and was abruptly stilled.

The man in violet answered in a soft voice, speaking English with a

slightly foreign accent, or so at least it seemed to the Sleeper’s ears.

“You are quite safe. You were brought hither from where you fell asleep.

It is quite safe. You have been here some time—sleeping. In a trance.”

“e said, something further that Graham could not hear, and a little phial was handed across to him. Graham felt a cooling spray, a fragrant mist played over his forehead for a moment, and his sense of refreshment increased. He closed his eyes in satisfaction.

“Better?” asked the man in violet, as Graham’s eyes reopened. He was a pleasant-faced man of thirty, perhaps, with a pointed flaxen beard, and a clasp of gold at the neck of his violet robe.

“You have been asleep some time. In a cataleptic trance. You have heard? Catalepsy? It may seem strange to you at first, but I can assure you everything is well.”

“Graham did not answer, but these words served their reassuring purpose. His eyes went from face to face of the three people about him. They were regarding him strangely. He knew he ought to be somewhere in Cornwall, but he could not square these things with that impression.

A matter that had been in his mind during his last waking moments at Boscastle recurred, a thing resolved upon and somehow neglected. He cleared his throat.

They were all assiduous to hear. But he had to repeat it. “What an odd blurr in his accent!” whispered the red-haired man. “Wire, sir?” said the young man with the flaxen beard, evidently puzzled.

“He means send an electric telegram,” volunteered the third, a pleasant-faced youth of nineteen or twenty. The flaxen-bearded man gave a cry of comprehension. “How stupid of me! You may be sure everything shall be done, sir,” he said to Graham. “I am afraid it would be difficult to—wire to your cousin. He is not in London now. But don’t trouble about arrangements yet; you have been asleep a very long time and “and the important thing is to get over that, sir.” (Graham concluded the word was sir, but this man pronounced it “Sire.”)

It was all very puzzling, but apparently these people in unfamiliar dress knew what they were about. Yet they were odd and the room was odd. It seemed he was in some newly established place. He had a sudden flash of suspicion! Surely this wasn’t some hall of public exhibition! If it was he would give Warming a piece of his mind. But it scarcely had that character. And in a place of public exhibition he would not have discovered himself naked.

Then suddenly, quite abruptly, he realised what had happened. There was no perceptible interval of suspicion, no dawn to his knowledge. Abruptly he knew that his trance had lasted for a vast interval; as if by some processes of thought-reading he interpreted the awe in the faces that peered into his. He looked at them strangely, full of intense emotion. It seemed they read his eyes. He framed his lips to speak and could not. A queer impulse to hide his knowledge came into his mind almost at “the moment of his discovery. He looked at his bare feet, regarding them silently. His impulse to speak passed. He was trembling exceedingly.

“They gave him some pink fluid with a greenish fluorescence and a meaty taste, and the assurance of returning strength grew.

“That—that makes me feel better,” he said hoarsely, and there were murmurs of respectful approval. He knew now quite clearly. He made to speak again, and again he could not.

He pressed his throat and tried a third time. “How long?” he asked in a level voice. “How long have I been asleep?”

“Some considerable time,” said the flaxen-bearded man, glancing quickly at the others.

“Yes—yes,” said Graham, suddenly testy. “But I want—Is it—it is—some years? Many years? There was something—I forget what. I feel—confused. But you—” He sobbed. “You need not fence with me. How long—?”

He stopped, breathing irregularly. He squeezed his eyes with his knuckles and sat waiting for an answer.

They spoke in undertones.

“Very much more than that.”

He looked at them and it seemed as though imps were twitching the muscles of his face. He looked his question.

“Many years,” said the man with the red beard.

Graham struggled into a sitting position. He wiped a rheumy tear from his face with a lean hand. “Many years!” he repeated. He shut his eyes tight, opened them, and sat looking about him from one unfamiliar thing to another.

“How many years?” he asked.

“You must be prepared to be surprised.”

“More than a gross of years.”

He was irritated at the strange word. “More than a what?”

Two of them spoke together. Some quick remarks that were made about “decimal” he did not catch.

“How long did you say?” asked Graham. “How long? Don’t look like that. Tell me.”

Among the remarks in an undertone, his ear caught six words: “More than a couple of centuries.”

“What?” he cried, turning on the youth who he thought had spoken. “Who says—? What was that? A couple of centuries!”

Download a FREE copy of H. G. Wells' dystopian sci-fi classic The Sleeper Awakes when you sign up for The Portalist newsletter!