Robot Takeover: This New Book Explores the Post-Apocalyptic World of 2083

The Robots of Gotham confirms our greatest fears about technology.

Sixty-five years into the future, machines will take over the world.

At least, that's the premise of Todd McAulty’s new science fiction epic The Robots of Gotham. Prior to the start of the story, America outlawed the development of artificial intelligence and entered into a war with robot-led fascist countries—a war the United States quickly lost. Since the 2070s, robots have been gaining power. They've divided parts of the United States, and the rest of the world, into territories controlled by machines, humans…or a mix of both.

Canadian businessman Barry Simcoe arrives in Venezuelan-occupied Chicago, hoping to close some deals as the city remains in shambles. But when machines attack his hotel, his mission takes a serious turn. Together with a band of misfits—including a Russian virologist and biowarfare specialist, a Venezuelan army sergeant, and a robot named Nineteen Black Winter (who happens to belong to the royal family in the Kingdom of Manhattan)—Barry uncovers a conspiracy to wipe out humanity with a catastrophic plague.

Want more robot fiction? Sign up for The Portalist's newsletter and get our recommended reads delivered straight to your inbox.

Debut author Todd McAulty—an expert in machine language learning—transports readers into a dystopian, post-apocalyptic future where humanity struggles to survive at the hands of far more intelligent machines. Told through a series of blog posts written by Barry and others, The Robots of Gotham is a gripping dystopian tale you won't be able to put down. From commentary on machine ethics to war, McAulty's futuristic fiction is rooted in contemporary topics.

In the following excerpt, we meet Barry—who is recapping a very stressful morning in which he is woken up by Venezuelan soldiers and forced to evacuate his hotel. What ensues is a panicked Chicago, realizing that war is upon them...and they're caught in the crossfire. 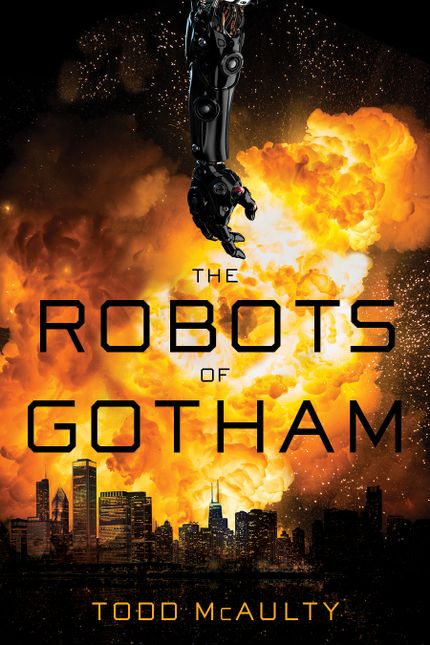