Read an excerpt from the post-apocalyptic adventure novel by a skilled author of thrillers.

Eric Van Lustbader’s Sunset Warrior Cycle is a post-apocalyptic five-book series that transports readers to an underground world ruled by the elite. From the same author who continued the legacy of the Jason Bourne series, The Sunset Warrior is the first installment in Lustbader’s well-crafted universe, and explores themes like class and power through a sword and sorcery lens.

The Sunset Warrior takes place in a world where the entire planet has frozen over, and the survivors of this ecological disaster are forced to take refuge in the Earth’s crust. In this new underground society known as the Freehold, lords called the Saardin maintain order in a feudal-like system where they use the Bladesmen, a group of skilled samurai, as their muscle.

Among this Bladesmen is Ronin, a lone wolf warrior who lives by his own terms. When a war looms over the Freehold, Ronin finds himself at the center of the conflict and unable to choose a side. As tensions escalate underground, Ronin embarks on a journey that takes him to the tundra surface of the Earth on the path to find peace for his people.

In the following excerpt, Ronin recovers from a beating administered by other Bladesmen. As Ronin and Stahlig, a medic and friend, converse with each other, we glimpse Ronin’s past and learn more about the brewing war in Freehold. 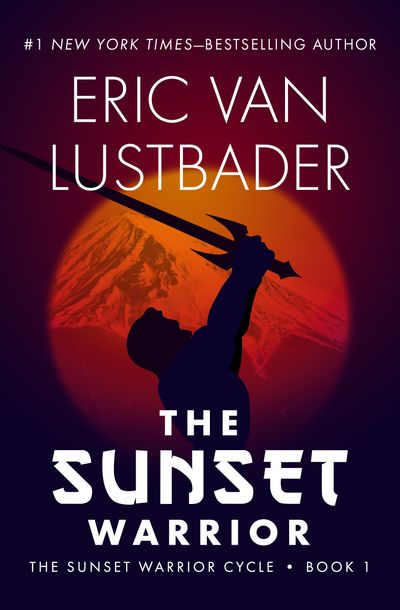 Ronin was dying and he did not know it.

He lay quite still and completely naked on the centre of an elliptical stone slab which occupied roughly the centre of a square, cold chamber. Despite this, tiny beads of sweat glinted in the bristles of his short, black hair. His fine features held no expression whatsoever.

Standing over him, bent, eyes intent, was Stahlig, the Medicine Man. Ronin tried to relax, thinking, This is all a waste of time, as Stahlig’s fingers probed and pushed at his chest, moving slowly down towards his ribs on the left side. He tried not to think of it but his muscles had a will of their own and they betrayed him, jumping in pain under the thick fingers.

Ronin stared at the ceiling; at nothing. What was bothering him? It was merely a fight. Merely? His lips curled in distaste. A brawl; rolling in the Corridor like a common – abruptly remembrance blossomed …

His bare arms slick with sweat, his thick sword just sheathed, heavy at his side, his hands light after almost a full Spell of Combat practice. Walking alone and distracted out of the Hall of Combat into a knot of people, all at once surrounded by loud voices disclaiming hotly, stupidly, and he paid no attention. Something pushed against him and a voice cut through the din.

‘And where are you going?’

It was cold and affected and belonged to a tall, thin, blond man who wore the obliquely striped chest bands of the Chondrin. Black and gold: Ronin did not recognize the colours. Behind the blond man on either side stood five or six Bladesmen wearing the same colours. Apparently they had stopped a cluster of Students on their way from practice. He could not think why.

His thin face was very white, dominated by a waxy nose. His high cheeks were pocked and a scar ran down like a tear from the corner of one eye so that it appeared lower than the other one.

RELATED: 12 Books with an Environmental Message to Read This Earth Day

Want more science fiction and fantasy? Sign up to get our recommended reads sent straight to your inbox.

Ronin was momentarily amused. He was a Bladesman and therefore practised with other Bladesmen. But these days he did not have much to do and boredom had led him to practice with the Students also. When he did that, as now, he wore plain clothes and those who did not know him took him for a Student.

‘Where I go and what I do is my own affair,’ Ronin said blandly. ‘What is your business with these Students?’

The Chondrin goggled at him, stretching his neck forward like a reptile about to strike, and two spots of colour appeared high on his cheeks, accentuating the whiteness of the pockmarks.

‘Where are your manners, Student?’ he said menacingly. ‘Speak with deference to your betters. Now answer the question.’

Ronin’s hand strayed to the hilt of his sword but he said nothing.

‘Well,’ sneered the Chondrin, ‘it appears this Student is in need of a lesson.’

As if the words were a signal, the Bladesmen rushed at Ronin. Too late he realized that he could not draw his sword rapidly within the confines of the crowd. Then they were piling into him, the sheer force of their combined weight bearing him to the ground, and he thought, I do not believe this is happening. Instinctively he kicked out as he was borne under, and had the satisfaction of feeling his boot smash into flesh that gave way. Almost at the same moment, a blow along the side of his head disrupted his enjoyment. Adrenalin spurted and he punched up and out, and even though he was on his back and the leverage was not there, he felt his fist connect as it split open skin, cracked into bone. He heard a brief wail. Then the boot caught him in the side and a thick gauze came down over his brain. He tried to hit again, could not, struggled with an enormous weight on his chest. His lungs were on fire and he felt ashamed. When the boot hit him again, he passed out.

Want more science fiction and fantasy? Sign up to get our recommended reads sent straight to your inbox.

The wave of pain came again but this time he had it under control and there was only the slightest movement. He looked at the wide head bent over him with its shaggy brows, rheumy eyes, and creased forehead.

‘Ach!’ exclaimed the Medicine Man, as much to himself as to Ronin. ‘What have you been up to, ah?’

He shook his head and, without looking at Ronin, turned and put a dark, furry cloth against the mouth of an opaque white-glass bottle, and turned it upside down. He applied the cloth to Ronin’s side. It was cold and the pain subsided.

RELATED: Win Two Copies of an Amazing New Fantasy to Read With a Friend

‘So. Dress and come inside.’ He threw the cloth over the back of a hard chair and disappeared through a doorway.

Ronin sat up, his side stiff but now without pain, pulled on his leggings and shirt, then his low leather boots. He stood to strap on his sword, then followed in the wake of Stahlig’s body into a warmly lighted cubicle in sharp contrast to the starkly geometrical surgery outside.

Here all was a jumble. Shelves of bound papers and tablets rose like wild ivy from floor to ceiling along three walls. Occasionally gaps appeared in the contents of the shelves, or markers stuck out at odd angles. Stahlig’s desk was set close to the far wall, and it was covered completely by mounds of papers and tablets, as were the two small chairs set before the desk. Behind the Medicine Man lay glass cases filled with phials and boxes.

Stahlig did not look up from his work as Ronin entered but he reached out behind him and got a clear bottle of amber wine, and from somewhere produced two metal cups, which he blew into perfunctorily before filling them halfway. He looked up then as he held one out. Ronin took it, and Stahlig sat back and waved an arm expansively.

Ronin had to set his cup down in order to clear away the masses of tablets from the chair. He hesitated with them in his arms.

‘Oh, drop them anywhere,’ said Stahlig with a flick of his thick hand.

Ronin sat and sipped, felt the sweet wine unroll its carpet of warmth along his throat and into his stomach. He took a long swallow.

Stahlig leaned forward, elbows on the masses of tablets, fingers steepled, his thumbs tapping absently at his upper lip. He said: ‘Tell me what happened.’

Ronin, swirling the wine slowly in his cup, said nothing. He sat very straight because of his side.

The Medicine Man dropped his eyes, crumpled a sheet of paper, and threw it into a corner apparently without caring where it landed.

‘So.’ He sighed audibly, and when he spoke again his voice had softened perceptibly. ‘You do not wish to speak of it, yet I know something troubles you.’

He hunched forward over the desk again. He stared at Ronin.

‘Tell me, how long do we know each other?’ His fingers moved along the desktop. ‘Since you were very young, since before your sister dis—’ He stopped abruptly and colour came to his worn cheeks. ‘I—’

‘You will not hurt me if you say it,’ he said softly. ‘I am beyond that.’ Stahlig said quickly, ‘Since before her disappearance,’ as if, even in speech, it was a terrible thing to linger over.

‘A long time we know each other. Yet you will not speak to me of what troubles you.’ His hands came together again. ‘You will leave here and go and talk to Nirren’—his voice had acquired a hard edge—‘your friend. Ha! He is a Chondrin, Estrille’s Chondrin, and what is his first concern? You are without affiliation—you have no Saardin to order you or protect you. He is without feelings, that one. He pretends friendship, for information. That is after all one of his functions.’

Ronin put down his cup. Another time he might have been angry with Stahlig. But, he thought, he truly likes me, watches out for me, he does not realize—yet I must remember that he fears many things, some justly, others not. He is wrong about Nirren.

‘No one knows better than I the deviousness of Chondrin,’ he said. ‘You know this. If Nirren seeks information from me, he is welcome to it.’

‘Ach!’ Stahlig’s fingers flailed the air. ‘You are not a political animal.’

The Medicine Man frowned. ‘I do not believe you realize the precariousness of the situation. Politics is what rules the Freehold. There has been much friction among the Saardin recently, and it becomes worse daily. There are elements within the Freehold—very powerful elements—who, I believe, want a war.”