National Book Award finalist Ibi Zoboi's biography of Octavia E. Butler is "as unique in form and content" as Butler herself (Horn Book).

Published in January 2022, Star Child marries verse and prose to explore how Butler was influenced by the era in which she lived, and vice versa.

The Portalist is thrilled to share an excerpt below from Zoboi's singular work, courtesy of Dutton Books for Young Readers.

Read on for an excerpt from Star Child, then download the book! 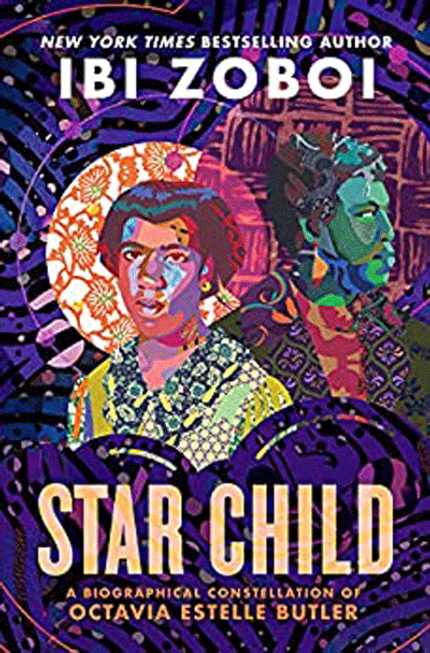 Spirit of the Times

ZEITGEIST IS A GERMAN WORD that means “spirit of the times,” and people often use it to characterize the forces that shape a period of his­tory. When Octavia’s parents were married in 1931, the spirit was dark as the nation was mired deep in the worst economic crisis in American history—the Great Depression. The second decade of their marriage saw the spirit shift from one of global economic hardship to one of global war. World War II began for America in 1941, when Japan attacked a naval base in Pearl Harbor, Hawaii.

For Black Americans like Laurice and Octavia Margaret, their lives were also shaped by a thriving Black culture that spread throughout America, starting with the Harlem Renais­sance in the 1920s and 1930s and continued by writers like Zora Neale Hurston and Langston Hughes; musicians like Duke Ellington, Ella Fitzgerald, and Louis “Satchmo” Arm­strong; as well as groundbreaking athlete Jackie Robinson, while violent overt racism terrorized Black people all over the country.

From 1942 to 1946, the top-secret Manhattan Project took place in a number of US cities, including Los Alamos, New Mexico, where scientists experimented with nuclear weapons. World War II ended in 1945 when the Germans and the Japanese surrendered; the United Nations was founded later that year.

The Brooklyn Dodgers signed Jackie Robinson in 1947, the first African American player to play in modern Major League Baseball. Robinson had attended the same high school as Octavia years before she enrolled.

Want more SFF? Sign up to get the best in Butler sent straight to your inbox!

Many Black men served in World War II, including Octa­via’s father, but they did so in a military that was still mostly segregated. President Harry S. Truman ended segregation in the Armed Forces in 1948 by executive order. After soldiers returned from the war, lots of babies were conceived and born, creating what was called the baby boom. Laurice and Octavia Margaret Butler gave birth to their first and only child sixteen years into their marriage.

after the war, and their girlfriends

cheered and kissed them with big, wide hugs.

Paper snow fell from the sky

as the bands marched down the

Main Streets parading for the soldiers

who fought for their nation,

for freedom, for peace in the world.

The booms were now distant

of thunder on the other side of sunshine.

So the soldiers married their girlfriends

and the new houses,

with their triangular roofs

and their white picket fences

were filled with love instead of hate

laughter instead of bombs

babies instead of war.

Want more SFF? Sign up to get the best in Butler sent straight to your inbox!