Oisín McGann Shares His Approach to 'Writing What You Know'

The Wildenstern Saga author explains his love of steampunk, and why he incorporates fun into his dystopian tales.

As an artist and illustrator, do visuals play a large part in your writing process? Do you have any suggestions for aspiring writers for how to approach writing visual descriptions?

Visuals are absolutely an important part of my storytelling; if I could just make a movie straight out of my head, I would. Illustration, comics, and movies were as big an influence on my craft as books. I studied animation and film in college, among other things. My aim is to cast a spell, and I try to use staging, action and other visual techniques to tell the story as much as possible. I write novels, so language is the tool of my trade and it should always be compelling and evocative–words are seeds intended to germinate in someone else’s imagination–but if a reader is stopping every couple of minutes to admire a poetic sentence, I’m not doing my job properly. I want to use words to create images, to play a movie in your head–the less you’re aware you’re reading, the better.

If a reader is stopping every couple of minutes to admire a poetic sentence, I’m not doing my job properly.

What was the inspiration for writing your steampunk series, Wildenstern Saga?

The series has only recently been released in North America, but I wrote Ancient Appetites, the first book, back in 2005-2006. It was after I’d just finished a kind of cyberpunk story and I wanted to go a different direction; a more archaic world that was gothic, creepy and ornate, but with a story or stories that were fast and fun. There were a couple of ideas that formed the core of the series; the first focused on a connection between money (or gold) and health. I had this idea of a society where the quality of your health was dictated by how wealthy you were. It was like taking the most ruthless interpretation of capitalism to its logical conclusion: if you’re rich enough, you can just go on living as those poorer than you die away. I thought a lot of people could relate to this, and it was the kind of meaty issue that could offer the opportunity to raise a little hell in the story.

Instead of making it a society, I closed it in a bit and, to keep it about a small number of characters, I made it about a family, whose culture of breeding predators means they allow assassination within the clan. If you want to improve your position in the family business, you can kill your older relatives. They see this as a means of keeping everyone on their toes – the family motto is ‘Suffer No Weakness’. Obviously, these more senior relatives are also rather difficult to kill, that’s how they got to where they are, so there’s a constant tension throughout. The family has supernatural healing abilities and they are all very well trained in defense, as well as murder, and live in a massive house full of secret passageways and booby traps and have tongues as sharp as their blades. Imagine living in a Hammer horror movie, if you will. The assassinations can’t be carried out willy-nilly – it has to be done in a civilised fashion. There are strict rules to keep it all civilised, called the Rules of Ascension. If you break one of these rules, you can be cast out of the family. Only a very few members of this family have any moral values at all, but there’s hope for a small group of the younger ones.

For a free copy of the Wildenstern Saga book Merciless Reason, subscribe to The Portalist! 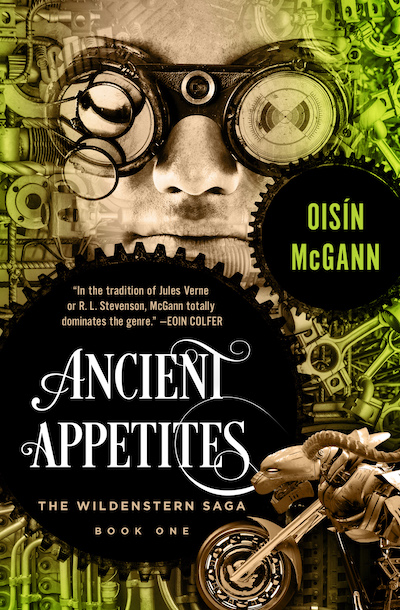 What got you into steampunk, and what initially interested you about the genre?

It was more the time period, initially, rather than the genre itself. Ancient Appetites was originally going to be a full-on fantasy story, set in an alternate world, but I felt it was heading in such an otherworldly direction, I could alienate a lot of readers who ‘don’t read fantasy’. I wanted to ground it more, and I’d wanted to write a fantasy adventure set in Ireland, so I picked the 19th century. Ireland was a pretty dramatic place back then. I kept thinking of Oscar Wilde and those delicate manners, the sharp-witted dialogue and elegant wealth, contrasted with the hopeless, abject poverty in the countryside and the ‘gentlemen’ who treated women as second-class human beings–two of the younger characters, Daisy and Tatiana, constantly defy this. There was the industrial revolution and its brutal working conditions and the violence of Ireland’s ongoing struggle for independence. The world was changing, utterly. As a setting, it was too good an opportunity to miss, but it was heavyweight stuff and could easily have got very morbid and miserable and that was exactly the kind of thing I hated as a kid being introduced to Irish literature. I was absolutely determined to make these stories FUN. I had to show the reader a good time, or it wasn’t going to work.

I think steampunk is essentially a nostalgic kind of science fiction, for those who grew up reading the likes of Jules Vern, H.G. Wells, and maybe Sherlock Holmes and even Professor Branestawm and the cartoons of W. Heath Robinson. It has a slightly madcap aesthetic, favouring chunky, physical, mechanical technology over electrical devices and has that great combination of genteel characters in fancy décor, against the grit and grime of the industrial revolution and the violence of the 19th century. I wasn’t particularly a steampunk fan, though I had read the likes of The League of Extraordinary Gentlemen, The Difference Engine and Jules Verne had always been an influence, so it was nice to bring a rather anarchic Irish series to the genre. Steampunk is good craic, as we say in Ireland.

In “The Vile Desire to Scream” you deal with a lot of different issues, including family trust, loyalty, and reputation vs. honor. You then throw part-beast/part-machine characters into the mix. What do you do to keep all the threads of your story in-sync?

I need a strong theme to keep it all together and give the story an identity. Everything serves the story and that in turn is shaped by the central ideas that I can build on as a frame. Even the title helps focus those ideas. The Wildenstern stories are all about greed, trust, and betrayal and overcoming a heritage of entitlement. Like the contradictions of the industrial revolution itself, like religion versus reason, there’s a real contrast between old world honour and true social justice. The living machines, the engimals, start out in the stories as symbols of wealth; they are ancient devices, each one unique, and only the rich can afford them. The Vile Desire to Scream is a quick-read novella set between the novels and I cover some of the roles of these creatures, as work animals, pets or just entertainment–or, as in the case of the ‘trans-portmanteau’, a dressing table that can fold into a travel trunk and kidnap a young woman. But as we learn more about them through the series, we realise they are the last remnants of a civilisation that was wiped out thousands of years ago and by studying them, we can learn the secret to understanding the Wildensterns’ supernatural healing abilities. And it has nothing to do with gold or any other kind of wealth. In the meantime though, they’re good for a laugh and give the action scenes plenty of color. It means any discussion of science or politics can be carried out while engaged in a comical chase round a room after some weird, misbehaving creature ... which is always a positive thing. 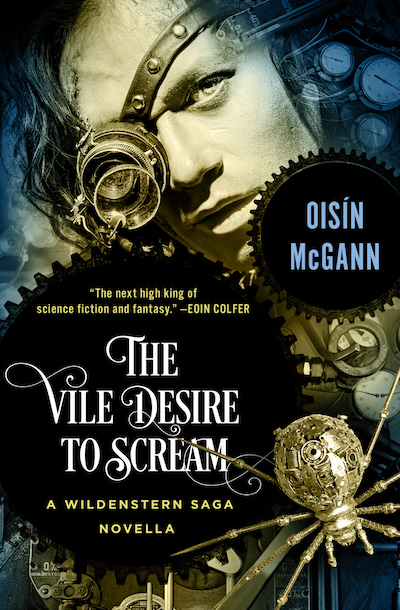 You write of the young journalist, Chi Sandwith in “The Need for Fear.” What aspects of your own background do you draw on to make your character(s) so realistic?

The Need for Fear is another quick-read novella that actually acts as a bridge between two of my full-length novels, Strangled Silence and Rat Runners, which I hadn’t originally intended to link up, but which I realised could represent two different eras in the formation of a modern surveillance state. Chi is one of the main characters in Strangled Silence, a would-be journalist and a conspiracy theorist who’s closer to the truth than he knows. As for how I create the characters, well ... there’s an old, worn out phrase that writers are supposed to obey: ‘Write what you know.’ Wouldn’t it be a very boring world if we only wrote about what we knew? Where’s the place for imagination in that advice? I’d change that to ‘USE what you know.’ Chi, like most of my characters is a mixture of people I know, churned up with some completely made-up stuff, all shaped by the role he has to play in the story. Like me, he’s curious about loads of different things. He has also spent time mixing with some serious individuals a lot harder than him–he tends to get in out of his depth. In the case of this taster story, his character was already very much established in the novel, so for me, he came into Need for Fear almost fully formed, but we see some of the events that lead to his obsession in Strangled Silence, as well as some of the early hints of the society where Rat Runners will be set. That said, each novel is a stand-alone–you don’t have to read them in a particular order.

I normally start with the concept of a novel first, and then sculpt my characters to fit, but others just pop up and feel right. They generally show up as I’m working out the early ideas for the storyline and are all chosen for particular roles–cast like actors, if you like. You set rules for them, qualities that will dictate their behaviour, steer decisions and make them distinctive, but they have to bring some personality with them too that has nothing to do with the plot, or they’re just not going to work. That stuff tends to come from your own life, the things you’ve seen and the people you’ve known. You can’t empathise with a plot function. And as with the Wildenstern stories, the surveillance state books deal with some dark material. You need engaging characters to lighten that load–otherwise, how are you going to have fun? 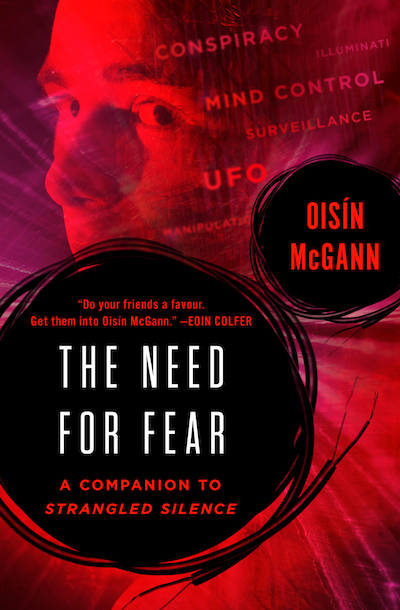