Promoted by Open Road Media | By The Portalist Staff

Anthony's latest fantasy foray follows Jess, who is plagued with a magical curse that prevents others from taking her seriously. Charismatic performer Magnus recognizes that Jess' affliction can also be a gift — and in the excerpt below, Jess uses her unusual skills to out-maneuver a swarm of vicious 'loan sharks.' 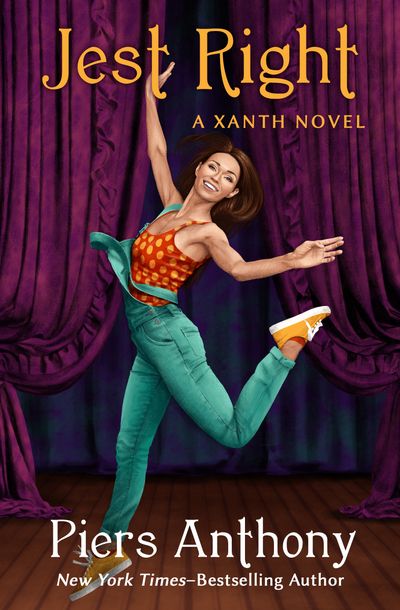 “What are those colored fins?” Myst asked.

Jess looked. “Loan sharks!” she said, horrified. “They’ll take an arm and a leg if you let them.”

Jess gazed at the circling fins. “No! But that means we can’t swim across.”

And that was surely mischief. What to do?

Myst looked at Jess. “I’m taking you seriously, because of the game. But those sharks aren’t in the game, are they?”

“What are you suggesting?” But Jess feared she knew.

“That mad ram didn’t butt you. Maybe the sharks won’t bite you.”

And maybe they would. Even a glancing bite that tore the clothing would be devastating.

“I believe in you,” Myst said.

Did Jess believe in herself? Her curse had messed her up all her life. Could she depend on it to mess up the sharks? Did she have the nerve to try?

The child was gazing at her expectantly. So was Magnus from across the pond. This was her family. Fake, temporary, but more than she’d ever had since leaving her mother, who had been immune.

“This had better work,” she said grimly. “Stay close to me.”

They forged into the water. Their suits kept them dry. The sharks oriented.

“Come and get us, fish-faces!” Myst called to the sharks.

Jess would have preferred that the child remain silent, but didn’t argue the case. She waded in chest deep and stood facing the sharks. She put her arms around Myst. Her heart was pounding. If she got the child bitten to death she’d never forgive herself, even if she herself no longer existed. But what else could she do? “Well? Make your move if you’re going to.” She was dreadfully afraid that they would.

The sharks converged, each one racing to get the first bite. And veered off at the last moment, crashing into each other in their haste to avoid the woman and the girl. The closer they got, the more force the curse had, making them unable to take the proffered meals seriously.

Well, now. Still fearfully nervous, Jess started swimming, Myst right in beside her. More sharks zoomed in, but sheared off. The curse was an effective shark repellent!

In a few more strokes they reached the far side of the pool, where Magnus anxiously waited. He reached out to help them out of the water, while the sharks angrily flashed their fins.

Want more book excerpts? Sign up to get the best in sci-fi and fantasy sent straight to your inbox.