The new series Strange Angel—premiering this week on CBS—focuses on Jack Parsons, the real-life rocket scientist whose extraordinary personal life was just as explosive as his inventions.

Watch the trailer for the new CBS show about Parson’s short, fascinating life below—then download the stunning biography that inspired the new series.

When Jack Parsons was born in 1914, space exploration was seen as a laughable fantasy.

But Parsons, born into a wealthy Los Angeles family, was obsessed with sending rockets to space. A devotee of science fiction, he was convinced humanity's destiny lay among the stars — and he wasn't afraid to put his life on the line in the pursuit of success. Parsons was part of the so-called Suicide Squad, a group of young men known for their risky experiments.

RELATED: A Pioneer of Rocket Science and His Bumpy Road to Fame 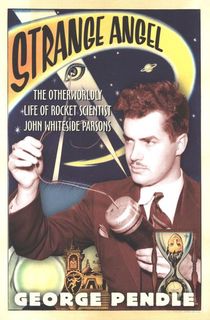 In his twenties, the world began to take Parsons' ambitions more seriously. In 1941, he and the Suicide Squad sold their rockets to the U.S. military. Two years later, they founded the Jet Propulsion Laboratory (JPL), which today is the backbone of NASA's space exploration program.

Want more science? Sign up to get science and space stories sent straight to your inbox.

But at the peak of his professional success, Parsons was perhaps better known for his unconventional personal life. Parsons was a practitioner of ritual sex magic. One of the most prominent American devotees of Thelema—a belief system created by controversial British mystic Alesteir Crowley—Parsons gained a reputation as a sexual libertine and a colorful eccentric. Some flocked to him: sci-fi writers like Ray Bradbury and L. Sprague de Camp applauded his enthusiasm for the mysteries of the universe. Others, like astronomer Fritz Zwicky, saw him as a menace.

After years of literally explosive shenanigans (Zwicky once accused Parsons of "blowing up half the business"), the eccentric scientist was forced out of the company he helped create.

Parsons threw himself deeper into studying mysticism and the occult. He also became embroiled in a complicated love triangle between his sister-in-law Sara and Scientology founder L. Ron Hubbard, with whom Parsons developed an involved ritual meant to manifest a literal goddess on Earth.

Ultimately, Parsons died the way he lived: At just 37, the inventor perished in a mysterious explosion in his home laboratory on June 17, 1952. His salacious personal life, and the circumstances of his death, have made Parsons more infamous than famous—but without his determination to reach the stars, modern space exploration would be unrecognizable.

RELATED: Will We Have Space Tourism in Our Lifetime?