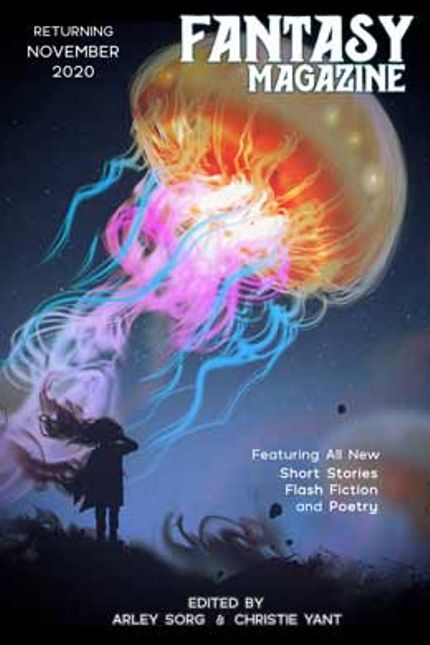 Want more short fiction? Sign up to get the best in sci-fi and fantasy sent straight to your inbox!

Why now to bring back Fantasy Magazine? What excites you most about the launch?

Arley Sorg:  We had both been thinking about doing something along these lines, and for me, there were a few "almosts" before this. Christie and I were doing a video chat, just to catch up, we started talking about the industry, and suddenly everything fell into place. For me the most exciting is the potential to find new voices, and to be a part of helping move genre forward.

Christine Yant: It was a wonderful moment of synchronicity. I was really missing the joy I felt in the early years of Lightspeed, and had started planning my own quarterly to get back into the slush, which I had imagined as filling the space left by the departed Shimmer Magazine. It was maybe all of ten minutes between the time we both mentioned our own projects to the moment it was clear that we needed to do something together.

As Arley said, discovering those new voices and bringing them to readers is what drives us. The enthusiasm we’re seeing from readers and writers tells me that we’re not alone!

What inspires you the most about short speculative fiction?

AS: The way that so much is possible, not just from the standpoint of story and impact of story, but even in terms of format, surprise, and more. Short fiction is incredibly dynamic.

CY: There is so much to love about the short form. You can make a huge impact in very little space. In a novel a reader’s emotional investment is spread out over multiple plots and subplots, and themes might not become apparent until the entire narrative is complete. In a short story you can focus on a moment in time, a single decision, or an important theme; you can explore an idea, experiment with structure and voice in a way that the long forms don’t allow as easily.

What led to the decision to include poetry in Fantasy Magazine?

AS: We both like poetry and it's something our sister magazines (Lighstpeed and Nightmare) aren't doing. We talked a lot about whether or not to do it, and how to do it.

But really, for me, poetry just makes sense. It often functions in similar ways to short fiction; it often tells a story or creates a moment in a striking way. Great poetry, to me, is a work of art, and it deserves to be seen.

Christie, I saw on Twitter that you recommend writers worry less, submit more. I love that advice! Can you speak to that a little more?

CY: Arley and I are both writers, so we're very familiar with the knots that writers tie themselves into over the submission process. There's so much second-guessing that we needlessly put ourselves through.

The only way to get published is to submit; the only way to improve is to produce a body of work—but that won't happen if we're endlessly tinkering with the same story and never move on from it. The best way to let go of that is send it out into the world and get to work on the next piece.

And when the rejection comes—as they often do—it’s fine to take a moment to be disappointed, but the cure for the disappointment is to send it right back out to the next market and get back to work on the next piece. The writer’s job is to write—the rest is just paperwork.

RELATED: Best Books on Writing By Sci-Fi and Fantasy Writers

Want more short fiction? Sign up to get the best in sci-fi and fantasy sent straight to your inbox!