Read an excerpt from the thrilling follow-up to Children of Blood and Bone!

The first book in the series, Children of Blood and Bone, introduced Zélie Adeola, a young girl determined to return magic to her home of Orïsha. Like many other maji—magic practitioners—Zélie's mother was murdered the night the magic vanished.

11 years after her mother's death, Zélie has a chance to topple the empire that killed her mother and eradicated the maji...and she has an unlikely ally from within the monarchy itself.

Readers immediately connected with Zélie's powerful story. Children of Blood and Bone became an instant bestseller, and went on to win the 2018 Andre Norton Award for Young Adult Science Fiction and Fantasy, in addition to numerous other accolades. A movie adaptation is even in the works at Disney!

Now, readers can discover the epic next chapter in Zélie's story. (Spoilers for Children of Blood and Bone to follow.)

RELATED: SNEAK PEAK: Children of Blood and Bone is Your Next YA Fantasy Obsession

At the close of the first book, Zélie and princess Amari accomplished the impossible and revived magic through the land of Orïsha. But powers weren’t restored only to the maji — nobles with ancestral magic regained their abilities too.

The burden is on Zélie to unite the maji, while the monarchy stands strong with the military to maintain their tight grasp on Orïsha. And Zélie’s duties go beyond protecting the new maji—she must also fight to ensure Amari’s claim to the throne. A catastrophic civil war is brewing, and Zélie is the only one capable of keeping Orïsha from falling apart.

Adeyemi’s sequel is gripping from the start. In a sneak-peek preview of the first chapter below, Zélie reckons with all that was sacrificed to restore Orïsha's magic. Even as she grieves her losses, she prepares for the fight ahead. 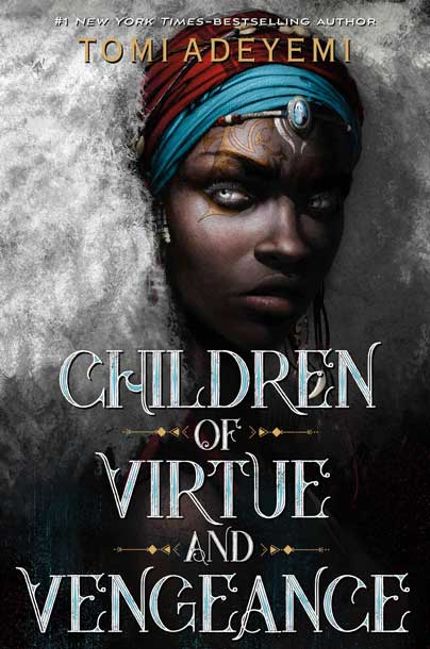 I try not to think of him.

But when I do, I hear the tides.

Baba was with me the first time I heard them.

The first time I felt them.

They called out to me like a lullaby, leading us away from the forest path and toward the sea. The ocean breeze ruffled the loose coils in my hair. Rays of sun spilled through the thinning leaves.

I didn’t know what we would find. What strange wonder that lullaby would hold. I just knew I had to get to it. It was like the tides held a missing piece of my soul.

When we finally saw it, my small hand slipped out of Baba’s. My mouth fell open with awe. There was magic in that water.

“Zélie rọra o,” Baba called as I drifted toward the tides. I flinched when the seafoam washed over my toes. The lakes in Ibadan were always so cold. But that water was warm like the smell of Mama’s rice. As warm as the glow of her smile. Baba followed me in and lifted his head to the sky.

In that moment he grabbed my hand; laced his bandaged fingers between mine and stared into my eyes. It was then that I knew, even if Mama was gone, we still had each other.

I open my eyes to the cold, gray sky; to the howling ocean crashing against Jimeta’s rocky bluffs. I can’t stay in the past.

I can’t keep my father alive.

The ritual that cost Baba his life haunts me as I prepare to lay him to rest. My heart hangs with all the pain he endured; every sacrifice he made so that I could bring magic back.

“It’s okay.” My older brother Tzain stands by my side and offers me his hand. A shadow of a beard wraps around his dark brown skin; the new hair almost masks how tight his clenched jaw truly is.

He squeezes his palm against mine as the gentle mist transforms to a pelting rain. The downpour chills us to the bone. It’s like even the gods can’t help but mourn.

RELATED: 11 Young Adult Fantasy Books to Cast a Spell on Readers of All Ages

Want more young adult fantasy books? Sign up for The Portalist's newsletter and get our recommended reads delivered straight to your inbox.

I’m sorry, I think to Baba’s spirit, wishing I could say it to his face. As we pull on the rope keeping his casket tethered to Jimeta’s rocky coast, I wonder why I thought burying one parent would prepare me to bury the next. My hands still shake with all the things left unsaid. My throat burns from the screams I force into silent tears. I try to keep it all inside as I reach for the jar filled with the last of our burial oil.

“Be careful,” Tzain warns as the tremor in my hand makes drops of oil spill over the jar’s rim. After three weeks of bartering to get enough to soak Baba’s casket, the rippling liquid feels more precious than gold. Its sharp smell burns my nostrils as I pour the last of it onto our burial torch. Tears stream down Tzain’s face when he strikes the flint. With no time to waste, I prepare the words of the ìbùkún—a special blessing a Reaper must pass to the dead.

The moment magic breathes under my skin, I can’t find my voice. The purple light of my ashê glows around my hands, the divine power that fuels our sacred gifts. I haven’t felt its heat since the ritual that brought magic back to Orïsha. Since Baba’s spirit tore through my veins.

I stumble back as magic bubbles inside me. My legs go numb. Magic shackles me to my past, dragging me under despite how hard I pull—

“No!” The shout echoes against the ritual walls. My body slams into the stone floor. A thud sounds as Baba follows, stiff as a board.

I move to protect him, but his eyes are frozen open in an empty glaze. An arrowhead sticks through his chest.

Blood soaks through his ripped tunic—

Tzain dives forward, reaching for the torch as it falls from my hand. He’s quick, but not quick enough. The flame extinguishes the moment the torch falls into the thrashing tides.

He struggles to light the torch again, but the fire won’t catch. I flinch as he chucks the useless wood into the sand.

“What’re we supposed to do now?

I hang my head, wishing I had an answer. With the kingdom in chaos, getting more oil could take weeks. Between the riots and food shortages, it’s hard enough to secure a measly bag of rice.

Guilt cages me like a casket, trapping me in a tomb of my own mistakes. Maybe it’s a sign I don’t deserve to bury Baba.

Not when I’m the reason he’s dead.

“Sorry,” Tzain sighs and pinches the bridge of his nose.

“If I had never touched that scroll . . . if I’d never found out about that ritual—”

“This isn’t on you,” Tzain says. “Baba gave his life so you could bring magic back.”

That’s the problem, I hug myself. I wanted magic back to keep Baba safe. All it did was send him to an early grave. What use are these powers if I can’t protect the people I love?

“If you don’t stop blaming yourself, you’ll never stop, and I need you to stop.” Tzain grabs both my shoulders, and in his gaze, I see the brown eyes of my father; eyes that forgive even when they shouldn’t. “It’s you and me now. We’re all we’ve got.”

I exhale and wipe my tears as Tzain pulls me into a hug. Even soaking wet, his embrace is still warm. He rubs his fingers up and down my spine the way Baba used to when he wrapped me in his arms.

I look back to Baba’s casket floating in the ocean, waiting for a fire that will never come. “If we can’t burn him—”

“Wait!” Amari calls from behind. She sprints down the iron ramp of the warship that’s been our home since the sacred ritual. Her soaked, white tunic is a far cry from the ornate geles and gowns she wore when she was Orïsha’s princess. It clings to her oak brown skin as she meets us at the thrashing tides.

“Here.” Amari hands Tzain a rusted torch from the captain’s quarters and a fresh jar of oil taken from her own meager ration.

“What about the ship?” Tzain frowns.

“We’ll survive.” Amari passes me the torch and my eyes linger on the new streak of white hair pasted to her cheek from the rain. A sign of the new magic that lives in her blood. A harsh reminder of the hundreds of nobles across Orïsha who now possess streaks and magic like hers.

I turn away before she can see my pain. My stomach clenches at the constant reminder of the ritual that gave Amari her gift and the boy who broke my heart.

“Ready?” Tzain asks, and I nod although it isn’t true. This time when he strikes the flint, I lower the torch to the rope. It catches in an instant. I brace myself as the line of fire races down the rope’s oil-soaked cords, shooting toward Baba’s casket. My hand grips my chest the moment he goes up in flames. Reds and oranges blaze bright against the gray horizon.

Until the other side.

Speaking the sacrament aloud brings me right back to Mama’s burial. To watching her corpse go up in flames. As the prayer passes, I think of all those who might rest with her in alâfia. Everyone who died so that we could bring magic back.

Lekan, the sêntaro who sacrificed himself to awaken my gift. My friends, Zulaikha and Salim, murdered when the monarchy attacked our festival.

Mama Agba, the Seer who spent her life watching over me and the other Ilorin divîners.

Inan, the prince I believed I loved.

Our battle isn’t over.

If anything, it’s just begun.

Want to keep reading? Pre-order your copy of Children of Virtue and Vengeance now!

The Legacy of Orïsha trilogy is a young adult fantasy series like no other. With a heroine immersed in a unique coming-of-age story, these novels explore complex themes of racism, slavery, and class. Author Tomi Adeyemi wields a fresh and passionate voice to weave a raw and powerful story of magic and adventure.

Released on December 3rd, Children of Virtue and Vengeance is the much-anticipated follow-up to Adeyemi’s debut novel. This series expertly broadens the fantasy genre’s horizons, empowering voices that aren’t heard from frequently enough in mainstream fiction. For readers who are looking for fantasy books with rich world-building, compelling characters, and thrilling adventure, Adeyemi’s work can’t be missed.

Want more young adult fantasy books? Sign up for The Portalist's newsletter and get our recommended reads delivered straight to your inbox.

This post is sponsored by Fierce Reads. Thank you for supporting our partners, who make it possible for The Portalist to continue publishing the stories you love.