May Ford be with us.

In 1932, British-born author Aldous Huxley penned Brave New World in response to utopian early sci-fi novels such as H.G. Wells' Men Like Gods and The Sleeper Awakes. Although the novel began as a humorous project, it became a way for Huxley to explore his repulsion with what he viewed as the isolation and debauchery of modern culture.

Brave New World is set in the World State, 632 years After Ford. Lenina works at a hatchery where children are grown. In this section below from Chapter 3, Lenina is encouraged by fellow hatchery worker Fanny to avoid becoming too committed to one man. Their discussion is juxtaposed with lessons about the World State from the director of the Central London Hatchery and Conditioning Centre.

Read on for an excerpt from Brave New World, then download the book! 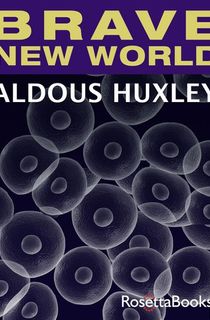 From her dim crimson cellar Lenina Crowne shot up seventeen stories, turned to the right as she stepped out of the lift, walked down a long corridor and, opening the door marked GIRLS’ DRESSING-ROOM, plunged into a deafening chaos of arms and bosoms and underclothing. Torrents of hot water were splashing into or gurgling out of a hundred baths. Rumbling and hissing, eighty vibro-vacuum massage machines were simultaneously kneading and sucking the firm and sunburnt flesh of eighty superb female specimens. Every one was talking at the top of her voice. A Synthetic Music machine was warbling out a super-cornet solo.

“Hullo, Fanny,” said Lenina to the young woman who had the pegs and locker next to hers.

Fanny worked in the Bottling Room, and her surname was also Crowne. But as the two thousand million inhabitants of the planet had only ten thousand names between them, the coincidence was not particularly surprising.

Want more classic sci-fi? Sign up to get the best in SFF sent straight to your inbox!

Lenina pulled at her zippers—downwards on the jacket, downwards with a double-handed gesture at the two that held trousers, downwards again to loosen her undergarment. Still wearing her shoes and stockings, she walked off towards the bathrooms.

Home, home—a few small rooms, stiflingly over-inhabited by a man, by a periodically teeming woman, by a rabble of boys and girls of all ages. No air, no space; an understerilized prison; darkness, disease, and smells.

(The Controller’s evocation was so vivid that one of the boys, more sensitive than the rest, turned pale at the mere description and was on the point of being sick.)

Lenina got out of the bath, toweled herself dry, took hold of a long flexible tube plugged into the wall, presented the nozzle to her breast, as though she meant to commit suicide, pressed down the trigger. A blast of warmed air dusted her with the finest talcum powder. Eight different scents and eau-de-Cologne were laid on in little taps over the wash-basin. She turned on the third from the left, dabbed herself with chypre and, carrying her shoes and stockings in her hand, went out to see if one of the vibro-vacuum machines were free.

And home was as squalid psychically as physically. Psychically, it was a rabbit hole, a midden, hot with the frictions of tightly packed life, reeking with emotion. What suffocating intimacies, what dangerous, insane, obscene relationships between the members of the family group! Maniacally, the mother brooded over her children (her children)… brooded over them like a cat over its kittens; but a cat that could talk, a cat that could say, “My baby, my baby,” over and over again. “My baby, and oh, oh, at my breast, the little hands, the hunger, and that unspeakable agonizing pleasure! Till at last my baby sleeps, my baby sleeps with a bubble of white milk at the corner of his mouth. My little baby sleeps…”

“Who are you going out with to-night?” Lenina asked, returning from the vibro-vac like a pearl illuminated from within, pinkly glowing.

Lenina raised her eyebrows in astonishment.

“I’ve been feeling rather out of sorts lately,” Fanny explained. “Dr. Wells advised me to have a Pregnancy Substitute.”

“But, my dear, you’re only nineteen. The first Pregnancy Substitute isn’t compulsory till twenty-one.”

“I know, dear. But some people are better if they begin earlier. Dr. Wells told me that brunettes with wide pelvises, like me, ought to have their first Pregnancy Substitute at seventeen. So I’m really two years late, not two years early.” She opened the door of her locker and pointed to the row of boxes and labelled phials on the upper shelf.

“SYRUP OF CORPUS LUTEUM,” Lenina read the names aloud. “OVARIN, GUARANTEED FRESH: NOT TO BE USED AFTER AUGUST 1ST, A.F. 632. MAMMARY GLAND EXTRACT; TO BE TAKEN THREE TIMES DAILY, BEFORE MEALS, WITH A LITTLE WATER. PLACENTIN: 5CC TO BE INJECTED INTRAVENALLY EVERY THIRD DAY… Ugh!” Lenina shuddered. “How I loathe intravenals, don’t you?”

“Yes. But when they do one good…” Fanny was a particularly sensible girl.

Our Ford—or Our Freud, as, for some inscrutable reason, he chose to call himself whenever he spoke of psychological matters—Our Freud had been the first to reveal the appalling dangers of family life. The world was full of fathers—was therefore full of misery; full of mothers—therefore of every kind of perversion from sadism to chastity; full of brothers, sisters, uncles, aunts—full of madness and suicide.

"And yet, among the savages of Samoa, in certain islands off the coast of New Guinea…"

The tropical sunshine lay like warm honey on the naked bodies of children tumbling promiscuously among the hibiscus blossoms. Home was in any one of twenty palm-thatched houses. In the Trobriands conception was the work of ancestral ghosts; nobody had ever heard of a father.

“Extremes,” said the Controller, “meet. For the good reason that they were made to meet.”

“Dr. Wells says that a three months’ Pregnancy Substitute now will make all the difference to my health for the next three or four years.”

“Well, I hope he’s right,” said Lenina. “But, Fanny, do you really mean to say that for the next three months you’re not supposed to…”

“Oh no, dear. Only for a week or two, that’s all. I shall spend the evening at the Club playing Musical Bridge. I suppose you’re going out?”

“Again?” Fanny’s kind, rather moon-like face took on an incongruous expression of pained and disapproving astonishment. “Do you mean to tell me you’re still going out with Henry Foster?”

Mothers and fathers, brothers and sisters. But there were also husbands, wives, lovers. There were also monogamy and romance. “Though you probably don’t know what those are,” said Mustapha Mond.

They shook their heads.

“But every one belongs to every one else,” he concluded, citing the hypnopædic proverb.

The students nodded, emphatically agreeing with a statement which upwards of sixty-two thousand repetitions in the dark had made them accept, not merely as true, but as axiomatic, self-evident, utterly indisputable.

“But after all,” Lenina was protesting, “it’s only about four months now since I’ve been having Henry.”

“Only four months! I like that. And what’s more,” Fanny went on, pointing an accusing finger, “there’s been nobody else except Henry all that time. Has there?”

Lenina blushed scarlet; but her eyes, the tone of her voice remained defiant. “No, there hasn’t been any one else,” she answered almost truculently. “And I jolly well don’t see why there should have been.”

“Oh, she jolly well doesn’t see why there should have been,” Fanny repeated, as though to an invisible listener behind Lenina’s left shoulder. Then, with a sudden change of tone, “But seriously,” she said, “I really do think you ought to be careful. It’s such horribly bad form to go on and on like this with one man. At forty, or thirty-five, it wouldn’t be so bad. But at your age, Lenina! No, it really won’t do. And you know how strongly the D.H.C. objects to anything intense or long-drawn. Four months of Henry Foster, without having another man—why, he’d be furious if he knew…”

“Think of water under pressure in a pipe.” They thought of it. “I pierce it once,” said the Controller. “What a jet!”

He pierced it twenty times. There were twenty piddling little fountains.

“Mother!” The madness is infectious.

“My love, my one and only, precious, precious…”

Mother, monogamy, romance. High spurts the fountain; fierce and foamy the wild jet. The urge has but a single outlet. My love, my baby. No wonder these poor pre-moderns were mad and wicked and miserable. Their world didn’t allow them to take things easily, didn’t allow them to be sane, vir“tuous, happy. What with mothers and lovers, what with the prohibitions they were not conditioned to obey, what with the temptations and the lonely remorses, what with all the diseases and the endless isolating pain, what with the uncertainties and the poverty—they were forced to feel strongly. And feeling strongly (and strongly, what was more, in solitude, in hopelessly individual isolation), how could they be stable?

“Of course there’s no need to give him up. Have somebody else from time to time, that’s all. He has other girls, doesn’t he?”

“Of course he does. Trust Henry Foster to be the perfect gentleman—always correct. And then there’s the Director to think of. You know what a stickler…”

Nodding, “He patted me on the behind this afternoon,” said Lenina.

“There, you see!” Fanny was triumphant. “That shows what he stands for. The strictest conventionality.”

Wheels must turn steadily, but cannot turn untended. There must be men to tend them, men as steady as the wheels upon their axles, sane men, obedient men, stable in contentment.

“And after all,” Fanny’s tone was coaxing, “it’s not as though there were anything painful or disagreeable about having one or two men besides Henry. And seeing that you ought to be a little more promiscuous…”

“Stability,” insisted the Controller, “stability. The primal and the ultimate need. Stability. Hence all this.”

With a wave of his hand he indicated the gardens, the huge building of the Conditioning Centre, the naked children furtive in the undergrowth or running across the lawns.

Lenina shook her head. “Somehow,” she mused, “I hadn’t been feeling very keen on promiscuity lately. There are times when one doesn’t. Haven’t you found that too, Fanny?”

Fanny nodded her sympathy and understanding. “But one’s got to make the effort,” she said, sententiously, “one’s got to play the game. After all, every one belongs to every one else.”

“Yes, every one belongs to every one else,” Lenina repeated slowly and, sighing, was silent for a moment; then, taking Fanny’s hand, gave it a little squeeze. “You’re quite right, Fanny. As usual. I’ll make the effort.”

Want more classic sci-fi? Sign up to get the best in SFF sent straight to your inbox!