BFFs Over BFs: Author Naomi Novik on the Importance of Female Friendship in YA

Novik emphasizes friendship and community instead of romance in her novel, “Uprooted.”

Naomi Novik doesn’t sit down to write a story simply because she wants to; she does it because she feels compelled to do so.

If you don’t know Naomi Novik, then you are missing out on some seriously excellent fantasy. The author of the 10-book Temeraire series—an alternate-history in which dragons fight alongside humans during the Napoleonic Wars—also has a stand-alone YA fantasy novel: Uprooted.

Uprooted follows Agnieszka, a 17-year-old girl living in a village that relies on the protection of the Dragon (not a real dragon, but a magical man) who selects a young girl every 10 years to be his servant as payment. Everyone expects the Dragon to next choose Agnieszka’s beautiful and perfect best friend Kasia, but instead, it is Agnieszka who becomes the unlikely chosen one.

The Portalist was lucky enough to be able to talk to the wildly creative Novik at this year’s New York Comic Con, and discuss her feelings on the Temeraire series coming to a close, the uniquely wonderful importance she placed on friendship in Uprooted, and what she learned from writing fanfic.

PORTALIST: How do you feel about finishing the Temeraire series?

P: You’ve been working on that for 10 years?

NN: Twelve! I started in 2004, and I had to write the first three before they brought it out because they published the first three one month apart. So, I was working on it in total isolation for two years, which actually, in retrospect, is kind of a luxury. I really believe in finishing things, so it’s important to me to end the story; but at the same time you want to end it well. If you end a story well, and with respect, it should land in a way that feels right with all the characters and also rewards the reader for their investment.

P: Of course, and after reading all of the books you want to give them something that they’ll like. Was that nerve-wracking to have to prepare the first three books without having any reception from fans?

NN: Not really, because I’d been a fanfic writer for about a decade before I started writing Temeraire, and I really feel that’s one of the wonders of fan fiction: You can post whatever the heck you want. And you don’t care. Many people do care—I mostly don’t care. I always enjoy the conversations that I have with these fans, and I write largely because I’m compelled to write these things—I have to write them. And because of that, it really teaches you the experience of posting to an audience. It teaches you to gauge when you’re writing something that other people are really going to enjoy.

P: Did writing three at a time give you a little break?

NN: The nice thing about it was that I was able to make those three consistent, and I think that the world [of Temeraire] as a whole benefited tremendously from the fact that I really could go back. I got to the third book, and I really knew universe. And I could actually go back and make sure the first one was consistent with the second one.

P: It’s so great that you’ve been able to work on a project for 12 years, and have it finally come to a close. I want to talk about Uprooted a bit. At the heart of the story are fairy tales—what are your favorite fairy tales?

NN: Several of my favorite fairy tales are Polish, and I don’t remember them super well—I don’t read Polish very well. I’m getting a little better at it. I think [writing it] was kind of like accessing my childhood. The one I really loved as a child, according to my parents, was Peter Pan. I loved the story; I made them read me the book over and over again—the Disney storybook, not the one by J.M. Barrie. I specifically loved Captain Hook, and I made my mom make up stories for me about how he didn’t actually get eaten by the crocodile—instead he and the pirates escaped and ended up shipwrecked on an island, and they had to climb coconut trees.

P: I love that! Most people don’t like the villains as children. The main character in Uprooted, Agnieszka, and her best friend Kasia: I love their friendship in the story because I feel like that’s the main relationship throughout, versus the typical YA book in which it’s more about the romance. What made you want to focus on friendship over romance?

[SPOILER WARNING: The following contains plot details from Uprooted. ]NN: Well, a few things. For me, Uprooted is very much about community—and caring about your community and being rooted. And what that means is that there’s this tradition of the hero's journey, where what you do is you sort of slough off your childhood home, shed skin, and go forth into the larger world. And I’m a little bit like … your home [doesn’t matter]? It so frequently is started when people you love are killed, which explains why [you go on the hero’s journey.] And that feels like it’s become, to some extent, the only story that gets told. And that’s just not the only story to be told. And so, for me, I wanted to write a story about a hero who did not slough off her home, who wanted to be a part of her home, who was, in fact, working for her home the entire time. It was about wanting to be great without losing who you are. Kasia actually represents the community. She’s Agnieszka’s friend, she’s the connection back to her home. In fact, in terms of romance, she takes the Dragon, and she makes him human. She takes the beast, and humanizes him by bringing him into the community—which is not something she does by force, but by opening a door he chooses to walk through.

P: And it’s not that the romance isn’t there, it’s just that the friendship is more important.

NN: And it is—Kasia is more important to Agnieszka, and she should be. They’re basically sisters.

P: Agnieszka has to go through a lot. More than any 17-year-old should have to go through. How do you get inside the mind of a teenager to be able to feel what she’s feeling?

NN: There are a few things. In this culture, being 17-years-old doesn’t mean the same thing as it does everywhere. [...] Sometimes I find that in a lot of YA books, [the idea is] that this is a 17-year-old so everything is going to be overwrought, overdramatic…and I don’t write that. I never felt that way, myself. She actually is in a big situation; she’s in a terrible situation. The thing is, to me she’s still pragmatic. She’s still like: “This is all terrible, but I’ve got to eat…” And it’s a sense of [knowing] that horrible things happen all the time, and you just sort of keep on going, and if you don’t keep on going you’ll just lie down and die.

P: The rights for the movie were confirmed a month after the book was released. Do you know if you’ll be involved in the adaptation process?

NN: I have been already!

P: That’s great! So you can make sure it’s still your story. Do you know what’s next?

NN: Yes! I’m working on a new book, Spinning Silver. I actually wrote a short story for an anthology called The Starlit Wood, and it’s just coming out. It’s a book of re-told fairy tales. So they were like, “Would you like to write a story for us?” Pick one fairy tale that nobody else has taken. So I looked at the list, and I wrote a story inspired by Rumpelstiltskin. And as I was writing it, they wanted like a 5,000-8,000 word story, and it sailed past 10,000, and at some point I realized: “Wait a second. This is trying to turn into a novel.” So I finished it as a short story, and there’s actually one key element that I had to choose—I’m actually going to talk about this at my panel today—there was essentially a line that I wrote that I realized blew the whole thing open. It was something really interesting, which is that in this universe, if you say something, or brag, for instance: “I can spin straw into gold,” if you do it three times—prove it three times—it becomes true. As soon as I wrote that, I realized, “This is too big for a short story.” And so I had to pull it down, and wrestle it into short story shape—and it was still about 12,000 words. And after that I wanted to turn it into a novel, [Spinning Silver].

[Editor's Note: The Starlit Wood, the anthology that features Novik's Rumpelstiltskin-inspired story, was released on October 18, 2016. Novik's next novel, Spinning Silver, is an expansion of her Rumpelstiltskin story within the anthology and does not yet have a release date.] 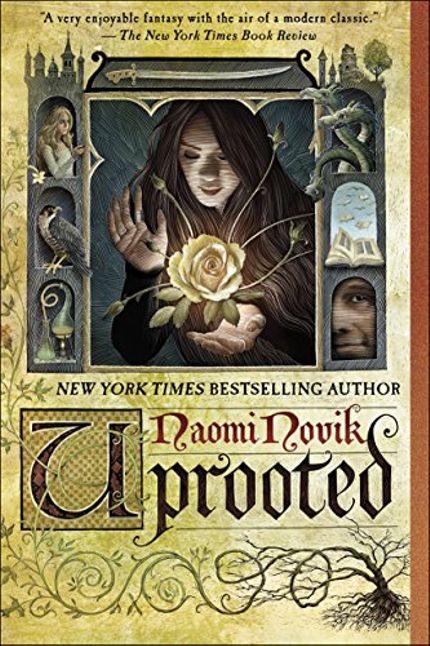