Dedicated "Star Wars" fans are always hungry for more details about their favorite fictitious world. But just where will Wendig take them?

On September 4, 2014, Chuck Wendig asked the Twitter universe to grant him a wish. And luckily for him, the wish granters were listening.

Little did he know that just a month later at New York Comic Con (NYCC), he would be recruited to write the Star Wars: Aftermath series. And on September 4, 2015—exactly one year after his original tweet—the first volume in the series was released.

The Aftermath books cover the 30-year span between Return of the Jedi and The Force Awakens. Before the first book came out, fans were full of questions: What happened to our favorite rebels in the interlude between the two films? How did the First Order spring from the ashes of the Empire?Wendig started to provide answers in his first two Star Wars books, Aftermath (2015) and Life Debt (2016). And the final installment in the trilogy, Empire’s End, will tie up all the loose ends with its February 2017 release.

The Portalist had the pleasure of coming full circle and speaking with Wendig at this year’s NYCC, two years after he landed the Star Wars gig. The author of several other science fiction and horror series, including Miriam Black and The Heartland, Wendig indulged our fan questions as well as divulged his feelings on the great responsibility that comes with the Star Wars series. 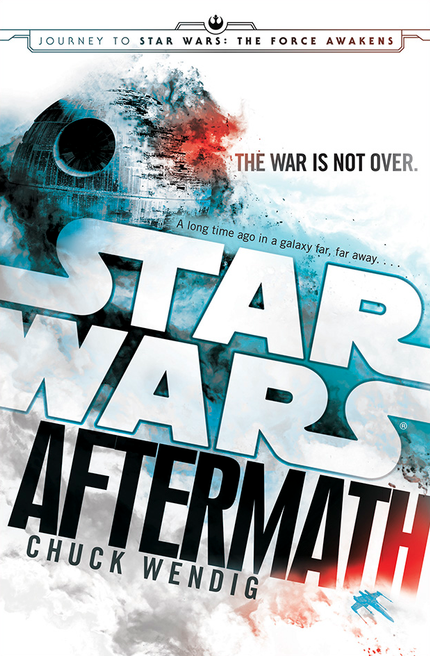 PORTALIST: You have written these Star Wars books, filling the gap between when the original trilogy ends and the most recent movie, The Force Awakens, begins. What is it like to have the power, or rather, the responsibility?

CHUCK WENDIG: I feel like Palpatine—electrocuting. It’s cool. When I first got the job I didn’t necessarily view it through the lens of like, ‘It’s this big thing.’ And they didn’t sell it that way, they were like: “Oh, it’s this book and it’s set here. What would you do with that?” And I was like, “Here’s what I’d do,” and at that point we knew we had to come up with some new characters and we weren’t going to use the legacy characters initially.

So I didn’t get, necessarily, that it was going to be this big thrust, and that it was the first book after Return of the Jedi. Once that hit, thankfully, I had already written the book, so the crushing pressure did not start ‘til later. But it’s been cool, man. It’s been really great. The fans are great. Working with Lucasfilm has been great.

P: Speaking of characters, you have all these new characters in your new world. Who is your favorite character out of those?

CW: The easy one is Mr. Bones. Mr. Bones is a weird delight to write. He’s such a great, complex character who has a lot to deal with, so that is meaty on the page. You’re sort of always kind of picking through all the things he has going on in his head and his life, and that makes it interesting. But just for the pure reptilian glam and that kind of thing, it’s Mr. Bones.

P: And what about favorite original characters?

CW: Oh, probably Han. [He] is sort of a complex guy. There’s a lot going on with Han. Not necessarily in the depth of his character, but in the moment. You know, he’s this kind of smuggler, ne’er-do-well, but he also is cheeky and smarmy. He’s funny without making jokes, but he’s also got a heart of gold wrapped in all those layers. And a cool guy.

P: Even though he’s constantly trying to leave. And then he stays…

CW: He also isn’t very good at always doing the right thing, either. He’s sometimes really good at it, and other times he just wants to go get in his ship and fly away and mess around. He’s fun to write in the moment. But Leia, there’s so much history to Leia, and it’s sort of intuitive.

Leia is not just appearing on the page; Leia has a legacy of operating with politics and the rebellion and who we’ve got now in the New Republic. So she’s a complicated figure both in the moment and historically. So she’s really fun to do the deep dive on and see what keeps coming up with her character.

P: They’re both amazing choices. But, not Luke?

CW: Well, I haven’t really done Luke yet. But I would love to! He’s got to be a hard one to write, too.

P: Is there anything that you as a Star Wars fan would love to know more about?

CW: We just hit it. It’s Luke. Luke is the big question, both from the films and these books. We reference him a little bit, reference what he’s up to. But I would love to get the chance to take another book as to what he’s been doing in the Aftermath period and to get into that. 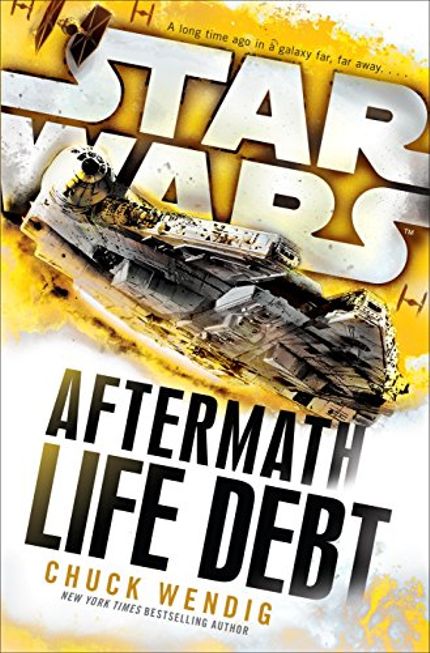 P: I know! No one knows what he’s been doing…

CW: Well, I know some of the stuff. But I’m not going to talk about it! [Laughter]

P: Of course not. So, you write novels, but you also write comic books. Do you prefer one or the other? And what’s the difference in the writing process?

W: With comic books, I have no idea what I’m doing. Which is both fun and terrifying. I just agree to do it. I’ve sort of done it in the past and tried it for fun, but it’s not something with which I am well practiced or that I understand very well. So it’s nice and interesting, but tricky. And comics are weird because with a novel, I’m the end. I write the book, and there’s editorial, but I sort of get to say what goes and what lands on the shelf.

As in a comic, it’s like a screenplay: I’m the beginning. And then there’s editorial, plus art, plus inks, plus colors. All that stuff is someone else. And they make my crass, terrible words amazing. I’m very lucky in that regard. I prefer novels. At the end of the day, that’s where I live. Novels are my house, comics are my vacation.

P: Since you write the horror and the darker stuff, and then also the sci-fi and fantasy, do you have a favorite genre to write?

CW: Outside of Star Wars, I consider all of my novels horror novels. They’re not be labeled that way, but at the end of the day that’s what I grew up reading—horror, and I feel like that’s fundamentally, even when it’s not leaning heavily on the tropes of horror, good stories always borrow the fear and the freakishness of horror. You have these moments of terror—even in science fiction and fantasy. Like the Expanse series, which is a science fiction series, clearly has horror roots, talking about the bio weapon and really creepy stuff. The Lord of the Rings has genuinely terrifying bits. There’s horror in The Lord of the Rings, even though it’s not a horror novel. So I kind of always go home to that.

P: People love asking you for your advice on writing, and you’ve written several books on the subject. How do you feel about being a role model for writers?

CW: Weird. Because I didn’t begin writing advice to help people; I began writing advice to yell at me, about me. In fact, when I first started TerribleMinds [Wendig’s blog]—I think it was 15 years ago–I had no metrics, I had no analytics, I had no comments section, I had no idea who was reading it. So I would just post, with the assumption of sort of squawking into the void, and then later when I switched over to WordPress and turned on analytics and suddenly I saw there were people looking at this I was like, “Oh no,” I feel like I have responsibility there. And then I quickly threw that responsibility in the trash and kept doing what I always did. I get emails probably every week from people who feel like there was something I said to help them, and that’s really great. I don’t promise that, but I’m happy that that’s true.

CW: I have a shed. A battle shed. Right before I started writing the first Aftermath, we have a four year old—well, at the time, he’s five now. He does not understand that just because daddy was working in the house that didn’t mean he could play. And he’ll come in through the vents like John McLane in Diehard—you can’t keep him out. So we sort of on a lark hired an Amish shed guild to build the shed in the woods. So I literally go out in the morning and wander into the trees like a weirdo. 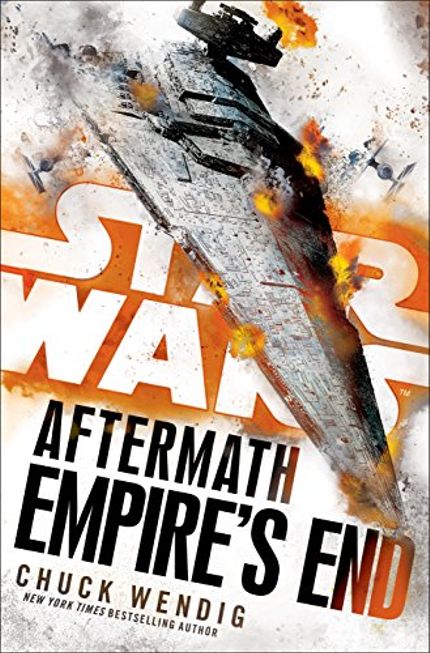 P: Does this shed have Wi-Fi?

P: You could live there if you needed to.

CW: Well, no bathroom or kitchen … so I have to come back into the house.

P: Oh, well maybe for the additions. Do you have a favorite author yourself?

CW: Not really one. Every year there are new authors. To go back to the horror thing though, a lot of people grew up reading Stephen King—so did I—I adore Stephen King. At the same time, I read Robert McCammon, which is kind of like third behind King and Koontz in that era. He’s super dark. The first thing I read of his was Swan Song, and it leveled me.

CW: “This could happen.” Yeah, it kept me up at night. Powerful writing, great stuff. Epic fantasy written in a nuclear, apocalyptic wasteland. So good. He’s kind of like my go-to on that. And he’s still writing!

P: If you could sum up your writing advice in one sentence, what would it be?

CW: Finish your shit. Most people don’t. So by doing that, you have separated yourself from most writers ever.

This interview has been edited and condensed.