What If You Were Trapped in Another Realm?

In “Shawndirea: Chronicles of Aetheaon: Book One,” a faery desperately tries to get back to her realm with the help of the human who captured her.

Imagine being lost and alone in a foreign place, with nowhere to run. When faery Shawndirea enters the human realm, she’s captured by Ben Whytten—an entomologist who mistook her for a butterfly. Damaging her wings, he vows to take her back to her realm of Aetheaon. But he’ll soon discover that he and Shawndirea are placing their lives in danger—as she is heir to the throne, and forces of darkness are out to destroy her.

Combining adventure, fantasy, and romance, the first book in the Chronicles of Aetheaon series takes readers on a sweeping ride through a world full of light and dark as Ben and Shawndirea encounter magic, mystery, and even romance.

Read on for an excerpt from Shawndirea: Chronicles of Aetheon: Book One, and then download the book. 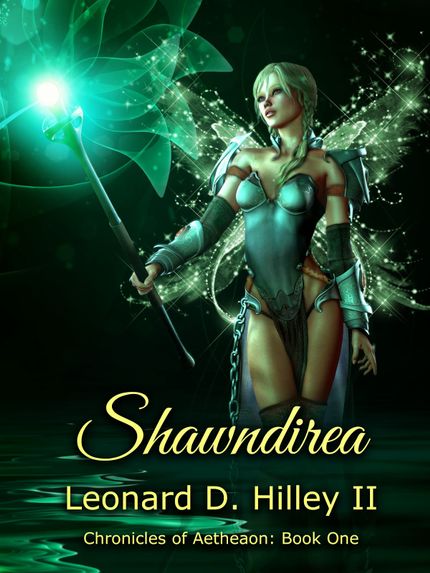 Shawndirea wanted to rise to her feet but dizziness prevented her from doing so. Just barely lifting her head made her stomach sicker.

This human surprised her more than any she’d seen before—here in this realm or in her homeland. Although he had been the one responsible for her injuries, she recognized the sincerity and remorse in his words and facial expressions. He truly felt sorrowful for what had happened, and she wished he was of her species and not human.

Few male Fae suppressed their arrogance long enough to show compassion like Ben had. Bringing him back to her kingdom wrought possible repercussions from her own race, but she had few alternatives since her wings were shredded. Trusting a human with her life was safer than being at the mercy of what predators she’d encounter at ground level. Faeries were blessed with wings and meant to fly. They were too vulnerable on foot but lightning fast in flight.

“Most of the time,” she whispered, thinking about how she’d failed to avoid Ben’s swift net.

She hardly remembered being captured, other than when she slammed into the end of the netting and thrashed her wings into ruined tattered ribbons. The instant pain that tore through her body had knocked her unconscious. She suddenly realized that had it been someone else that had captured her . . . she might be dead.

Shawndirea groaned as she repositioned herself. She opened her eyes slightly and watched several butterflies flutter into the wind. The way they stretched their wings to catch the morning breeze and drifted upward with the wind’s current, she knew she had done what she was destined to do. She had given back life to those who had been killed prematurely. So being captured by Ben had not been a mistake. Fate had crossed their paths.

Edging closer to falling asleep, she wondered if their meeting was meant for something more, something deeper. Was he supposed to pass through the Underworld to where her kind and other creatures lived? Could he offer a solution to the dark unrest that sought to control her world and its inhabitants? It certainly appeared that way.

Ben hurried to his small drab kitchen. Old green wallpaper peeled from the walls. Most of his old appliances had somehow outlived their warranties by twenty years. He opened one of the maple cabinet doors above the sink and took out a small bottle of honey. He measured out a tablespoon and mixed it into a tall glass of water. Not certain how much honey to water mixture he needed, he hoped she found it palatable.

From the old refrigerator he took a fresh blueberry from a pint cup, grabbed the honey mixture, and hurried back to the study. Shawndirea’s chest rose and fell in soft breaths. Her eyes remained closed.  Ben wondered how much using magic taxed her. At last count he had over twenty-five hundred butterflies and moths mounted in display boxes. That had probably required a massive amount of magic for the faery to bring them all back to life. Not to mention she also had to open each insect drawer and sealed glass-topped box that contained specimens. She did all that after having suffered the injuries from her capture.

Ben set the blueberry on the table and balanced a spoon filled with the honey mixture, angling it where it wouldn’t tip over.

Shawndirea’s nose twitched slightly. Her eyes opened, and she smiled. She scooted closer to the spoon, cupped the honey water in her tiny hands, and drank.

“It tastes fine. The sweeter the better though.”

Ben turned and took a step toward the door. “I can get more honey,” he said.

“No, this is fine. I’m just letting you know that you don’t have to worry about making it too sweet.”

“Sweet tooth?” he asked with a grin.

Shawndirea sat back and crossed her legs.

“Had to pass from one dimension into this one.”

“You have to find a weak spot in the dimensional wall in order to pass through. There aren’t many rifts.”

“What about the one where you came through? Can’t I take you back there?”

Shawndirea shook her head. “Unfortunately, no. The thin veil somehow reinforced itself after I went through. I believe it was intentional.”

She pursed her lips. “Someone wants to keep me trapped here.”

Want more epic fantasy books? Sign up for The Portalist's newsletter and get out-of-this-world stories delivered straight to your inbox.

“Have you passed through before?”

Shawndirea nodded. “Only once before. Almost didn’t find my way back.”

“With that possibility, why would you return to this realm?”

She shrugged. “Curiosity, I suppose. Other reasons, too, because my world is in unrest.”

“Darkness is spreading through our lands. Evil has taken root and threatens everything we hold sacred.”

“Since the veil you passed through sealed shut, how do we find a hole through the dimensional wall?” he asked.

“Caves are the best places to find a rift.”

“There are several in this area.”

Shawndirea tilted her head to the side and thought. After a few seconds, she said, “Any of them have deep passages?”

“One on my brother-in-law’s property, but it is supposedly haunted.”

“Then that’s the one we should take.”

“I don’t know. I’ve been in there. You hear voices. Shadows move. I’ve been touched, shoved, and heard my name whispered many times, but I’ve never seen anyone or anything.”

“The passages must connect to a major rift or pass through one.”

“Why would that make a difference?” he asked.

She smiled. “Because some sprites like to frighten people and can quickly move back and forth through the veil to enact mischievousness without being seen. Other creatures are much worse.”

“Some abduct humans and enslave or torture them to death.”

Ben shook his head. “People have vanished in this cave. It has become known as Devils Den.”

“Not an appropriate name. A devil doesn’t cross through a veil like that.”

He gave a slight shrug. “I’ll take your word for it.”

“On the other side of the veil, you’ll understand a bit more.”

“Maybe. But I’m not certain seeing will clear my thoughts about it.”

“How much time would it take to get to the cave?” she asked.

Ben shrugged. “About forty-five minutes. Not more than that. But you should get some rest before we go there.”

“No. My strength is coming back. But the time we get there, my energy will have returned. I’ll be refreshed.”

Want more epic fantasy books? Sign up for The Portalist's newsletter and get out-of-this-world stories delivered straight to your inbox.

This post is sponsored by Leonard D. Hilley II. Thank you for supporting our partners, who make it possible for The Portalist to continue publishing the fantasy stories you love.