The Untold Story of Captain Hook

There’s more than one side to every tale…

We all know Captain Hook—that pirate who’s afraid of crocodiles and has a hook for a hand. Well, at least, we all think we know him. But what if there was another side to the story? After all, we’ve only heard Peter Pan’s take.

Author Christina Henry offers up an eye-opening retelling of J.M. Barrie’s Peter Pan (originally known as Peter and Wendy) in her new book Lost Boy: The True Story of Captain Hook. That’s right: Before Captain Hook was hell-bent on destroying Peter and his followers, he himself was just another lost boy named Jamie. So how did he come to be the villain we know? You’ll have to read on to find out.

Read on for an excerpt of Lost Boy, and then download the book! 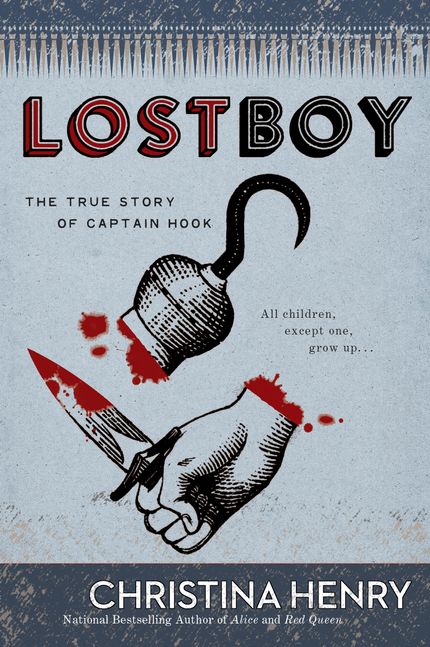 Once I was young, and young forever and always, until I wasn’t. Once I loved a boy called Peter Pan.

Peter will tell you that this story isn’t the truth, but Peter lies. I loved him, we all loved him, but he lies, for Peter wants always to be that shining sun that we all revolve around. He’ll do anything to be that sun.

Peter will say I’m a villain, that I wronged him, that I never was his friend.

But I told you already. Peter lies.

This is what really happened.

I was smaller then, and Peter was big and brave and wonderful. He said, “Come away and we’ll have adventures and be friends always,” and I put my hand in his and he smiled and that smile went into my heart and stayed there.

We ran through the streets of the city where I lived, and Peter was so swift and silent I could hardly believe it. He ran like the wind was part of him and his feet barely touched the ground and I thought, watching him run in the dark, that he might take off and fly and take me with him. It would be lovely to fly away from the city and into the stars, for the city was dark and dirty and full of big people who would grab at you if you were small and say, “Here, now, what’s all this?” and cuff you around the head just because they could and they would take your bread and your apples and leave you with your insides all twisted up and then throw you back in the mud and laugh and laugh.

But Peter said he would take me away from all that; he was taking me to a place where there was all the food you could eat and no one would hit you and there was no one to tell you what to do and when to do it and to get out of the way and go sleep in the trash where you belong. He said that on his island you could sleep in the trees and taste the salt from the sea on the air and there was treasure and fun all day long.

I wanted to go there. I couldn’t wait to go there. But I was scared about getting on a ship to go to the island. I’d never been on a ship before, but I’d seen them in the port. Peter might not like me if I told him I was scared so I didn’t say anything, but I was certain that once we got out to sea a monster would come and break the ship into a thousand pieces and we would fall, fall, fall to the far bottom of the water and never be seen again.

Peter tugged me along and I was getting tired and he said, “Come on, Jamie, just a little more and we’ll be there,” and I wanted to make him happy so he would smile at me again, so I ran and tried to be as fast and quiet as he.

I thought we would go to the docks, but Peter was taking us away from there and I tugged on his hand and said, “Aren’t we going to a ship?”

And Peter laughed and said, “Why would we go to a ship, silly?” But he said it in a way that didn’t hurt and didn’t make me feel stupid—more like he had a secret and was laughing because he was going to share it with me soon.

Related: Win a Copy of Lost Boy: The Untold Story of Captain Hook

Captain Hook depicted as a villain in the 1953 Disney adaptation, "Peter Pan."

The scream was still in my ears when I was roused by Peter’s cock-crow just as the sun emerged over the mountains. His cry and her scream twisted together into one sound and then the scream faded away as my eyes opened and I saw him perched in the window.

He had ginger hair that was always dirty, for he hated to bathe, and was dressed in a shirt and leggings made from deerskin, the hide grown soft and white with age.

His feet were bare and filthy, the toenails broken and torn from scampering over rocks and through trees. Peter was silhouetted in the window, legs wide apart, hands on hips, crowing with great vigor.

My eyes had opened immediately, accustomed to Peter’s morning antics. Several of the newer boys groaned and covered their heads with their arms.

Charlie blinked sleepy blue eyes at me. “Get up now, Jamie?”

“Aye,” I said gently. I placed the younger boy on his feet and rose, stretching. I felt somehow taller today than yesterday—not a lot, just a smidge. It seemed my hands were closer to the roof of the hollow than before. I didn’t have much time to trouble about it, though, for Peter’s next words shook it from my mind.

Peter clapped his hands together. “We’ve a raid today!”

“What for?” I asked, not troubling to keep my annoyance hidden.

I didn’t think this was the time for a raid. We’d only brought the last six boys over a few days before. Most of them were not even close to ready.

“The pirates need raiding, of course!” Peter said, like he was giving the boys a huge pile of sweets.

They were both whippet-lean and strong with it, little ropey muscles on their arms and legs, matching shocks of blond hair darkened by their mutual dislike of washing. I’d never been able to tell if they hated to wash because Peter did or because they liked feeling the bugs in their hair.

Want to win a copy of LOST BOY? Enter below!

By submitting your email, you agree to subscribe to The Portalist's newsletter, and to receive emails from Berkley (an imprint of Penguin Group). For full details, see the official rules.

Nod and Fog had been on the island longest except me, and raiding the pirates was their second-favorite game after Battle. There was nothing the twins liked better than an excuse to shed blood.

A long time ago Fog had taken down a wolf with only a sharpened rock, a feat that Peter so heartily approved of that he made Fog King of the Tree for a week. Fog made a kind of band for his head out of the tail and attached the wolf’s ears to it, and turned the rest of the skin into fur leggings. He’d briefly contemplated a cape, but dismissed it as too awkward for fighting.

Not to be outdone by his brother, Nod had promptly gone out and slaughtered one of the big cats that prowled in the mountains on the west side of the island. Now he wore the cat’s yellow ears and yellow furred leggings, and was still inclined to complain that Peter hadn’t made him the King of the Tree.

Some of the other boys tried to copy Nod and Fog, and got eaten by a cat for their trouble. And when we lost a boy we would go collect a new one from the Other Place, for Peter had particular ideas about how many boys should be about him at all times.

There were fifteen of us in all, including Peter and me. We lost a few every year to Battle, and to the raids, and some to illness or animals. Ambro had died coughing up blood, and now Del was looking thin and white. Soon he would start coughing too, and then Peter would send him outside to sleep.

Peter had complained incessantly about the noise when Ambro was dying, as if the boy could have prevented it. And if he could have stopped it, he would have, for we all loved Peter, even when he was cruel. His approval was hungrily sought, and his derision cut sharper than the blade of a pirate’s sword.

Peter hopped down from the window, landing lightly on his feet despite the height. Sometimes I thought that Peter couldn’t be hurt, and that was why he didn’t bother so much when others were, for he couldn’t understand their pain. And Peter was bound to the island in some way that the others weren’t. He understood the land, and it understood him. That was why I had grown a bit and Peter hadn’t.

This post is promoted by Berkley Publishing Group.Thank you for supporting our partners, who make it possible for The Portalist to celebrate the sci-fi and fantasy stories you love.