The Undelightened: Fantasy Told From the Dark Side

Fantasy books tend to focus on the light side of magic in the fight between good and evil…but what about the dark side?

If you’ve ever wondered what it’s like to be raised in a house of darkness, author Bentz Deyo is here to fill you in.

For members of the Darkness, your seventeenth birthday should mark your delightenment. That is, the rite of passage that darkens your soul and bestows magic upon you to aid in the fight against Light. But for Leam Holt, all he has to show for it is shame.

It’s been almost a year since his own failed delightenment, and now it’s his “perfect” brother Zach’s turn. But during Zach’s own delightenment ceremony, something changes—something that will make it possible for Leam to have a second chance at grasping magical powers. That is…if he isn’t pulled into the Light in the process.

Read on for an excerpt of The Undelightened, by Bentz Deyo, and then download the book. 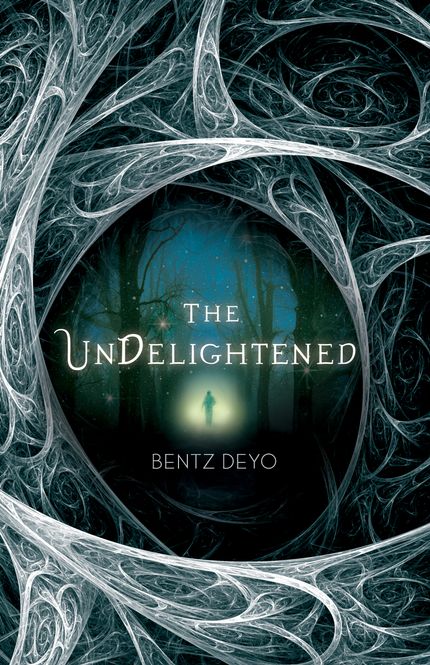 The gate was laced with intricate, metal ivy leaves, and the posts on each side of the gate were capped with dull, slightly-rusted silver statues. On the left post, a crow perched, with a drooping flower hanging from its beak; on the right post stood what looked like a cloaked monk, hood lowered, eyes hidden.

Zach inhaled a large breath and blew toward the crow. The weathered crow started gleaming, its mouth opened and the flower fell from its beak. Its petals separated away from the stem and began to dance with the fog as if a swirly wind had arisen from the cobblestoned driveway. The petals made their way along the length of the gate, one of them brushing the cloaked monk, settling on its shoulder. The inanimate monk now sparked to life, also gleaming as brightly as the bird. The monk’s stubby hands pulled the hood away from its face, revealing red eyes, like lasers, and they penetrated through the windshield, scanning both faces.

“Proceed,” the monk whispered, then pulled his hood back over his eyes. In the blink of an eye, the two gateposts were again muted, rusty and still.

“Say what you want, Leam, but we all know it crushed you,” Zach said, as the gate creaked open. “Regardless, Mother believes you’ll never delighten, if you even get another chance. She said the cursed spark inside you will never fully extinguish.”

“I don’t take stock in anything your mother says.”

“Oh, that’s right, your mother’s dead,” Zach sneered, his foot back on the gas.

Leam said nothing as the SUV crept up the driveway that snaked its way toward the manor. Protected by tall stone walls that surrounded the estate, the manor resembled something that might be described as half country club half medieval castle. But from this distance the fog was masking most of the vast structure—only the very tip of the tallest chimney was cleanly visible.

Zach cut the engine, a wild expression on his face. He ran his fingers through brown hair that fell almost to his shoulders. “You want to bring the Unknowing through the back for me? I need to shower and prepare.”

“She was your idea. Do it yourself.”

Zach flashed Leam his striking grin, hopped out of the car with a casual ease, and walked toward the front door passed the plush trees and tall statues that lined the manor’s approach. Reaching the threshold, he pressed the palm of his hand against the center of the huge, iron door, which creaked open upon contact.

Want more dark fantasy books? Sign up for The Portalist's newsletter and get stellar stories delivered straight to your inbox.

Squinting through the fog, Leam watched Zach disappear as the door closed behind him. It was a big night for his brother. Life changing. Leam thought back to the night of his own seventeenth birthday, the night he had failed his delightenment.

Something his father had said to the fat man who’d overseen the ceremony had stuck in Leam’s mind.

“Are you not aware of what he qualifies to be? That he has the potential to become…”

And that was all Leam had heard. He thought about that snippet of conversation often, though, and had spent countless hours in the second-floor library searching for anything his father could have been alluding to. For months, he immersed himself in every book, but found only one reference—one person of Darkness—that could be as important as the tone his father’s voice had suggested. Leam dismissed it, though; there was no way he could be the one mentioned in that book. Not a chance. He was too ordinary. Plus, he was a failure. He couldn’t even delighten.

It nagged him, though, what his father had said to the fat man, and a couple of months later he asked his dad about it. The reply was gruff, and upsetting.

“Only the questions of the delightened get answered. Out of the thousands of Dark families around the world, the Holts have remained one of the most distinguished and honorable. We have had, and will continue to have, a strong influence over the war against the Light. We live to serve Gideon, and do anything he asks of us, play any role he chooses for us, so that we may carry out his orders to aid in the fulfillment of the Cause.

“But you, Leam, you aren’t one of us anymore. You will not be taught our secrets. You will never be welcomed into Darkness Headquarters. As of now, you are not meant to know our ways. You may never know. But do know this, Leam. You have stained our honor.”

That was the last thing the man had said to him, ten months ago, and it was this conversation that shoved Leam into the deep hole of depression he had been trapped in since that day; and to make things worse, he had no friends who could lower a rope and try to pull him out. At school, every so often, some of the normal, non-magical kids would invite him to join their lunch table or to go get stoned behind the janitor’s van, but Leam always declined. If any of them were to find out about him and his family, it meant their death. He had been taught at a young age that regular humans were dirty and weak, and—like the caged mice in old man Scotterson’s AP Biology class—they deserved no respite from the experimentation that Darkness administered on them in its quest to rid them of the Light’s protection. Put simply, Unknowings couldn’t know. It had always been that way. But the Unks at school, to Leam, didn’t really seem too terrible.

Want more dark fantasy books? Sign up for The Portalist's newsletter and get stellar stories delivered straight to your inbox.

This post is sponsored by Bentz Deyo. Thank you for supporting our partners, who make it possible for The Portalist to continue publishing the science fiction and fantasy stories you love.