The Future of War, Peace, and Military Science Fiction

Military science fiction doesn’t have to just be about space battles and glory. It can examine why we, as a culture, choose to make war—and how we can change.

I didn’t sit down one day and decide to write military science fiction. I sat down to write a specific story, and it fell naturally into a military framework. This is undoubtedly due to my early media exposure. The U.S. space program was born from explicitly military objectives, and in the 1960s and 1970s, much of popular science fiction relied on military elements.

There’s also the fact that nearly every society in human history has had some sort of standing military. It’s an accepted truth: Any society of sufficient size will have—will require—some kind of armed forces. (It’s interesting how this is a tacit admission that, when push comes to shove, humans are always going to fail at compromise.) Given that I choose to write a future based on the world we’re in today, it makes sense that I’d include a military structure as part of that universe.

But that’s not really why I do it.

I’m not from a military family, but both my parents are. Both of my grandfathers were in the US Army, although both were retired by the time I was born. I grew up hearing stories of being moved around a lot, of the long periods of time spent without fathers, of the often awkward process of adapting to the change when their fathers came home. I grew up recognizing the non-military consequences of a military career.

And I was fortunate enough to know both of my grandfathers for a little while. One was often forbidding, but at the same time, he would tell jokes both sharp and deeply silly with a mischievous gleam in his eye. The other was sly and charming, and taught us how to play blackjack and do magic tricks. They were, to me, simultaneously bigger than life and palpably human.

I don’t see much of either man in our cultural archetypes of soldiers. The way soldiers tend to be painted by the media is strangely one-dimensional, and often bland: The Hero. The Coward. The Redeemed. The Damaged. Broad strokes, used for broad reporting. Anything more nuanced is relegated to “human interest” and often ignored.

It’s difficult, in this age when the United States has been at constant war for a generation, not to see this as a kind of othering, a way to sanitize our military, and distance our larger culture from the decision to perpetuate military conflict. We’ve managed, since Vietnam, to acknowledge that soldiers should not be scapegoated for the orders they follow. But by turning them into featureless cogs in uniform, we’ve somehow lost touch with the fact that we are sending people—our friends, our family, ourselves—into situations that cannot, by definition, ever be civilized.

Want more military sci-fi? Sign up to get the best in sci-fi and fantasy sent straight to your inbox.

And paradoxically, when we define soldiers as bigger than life, it makes it easier for us to point fingers if something goes wrong. They’re trained. They should know better. It can’t possibly be our fault.

It is our fault. It’s always our fault. War is a choice. But the more we blunt our perception of the people we send to do this work, the easier it is for us to abdicate responsibility for how serious the decision really is.

Fiction of all types is a game of what-ifs. Military science fiction takes a particular angle: What if this was what a futuristic military force looked like? What if this is what it was used for? What is it like for the soldiers themselves? Even the most jingoistic military science fiction puts the reader in the mind of a soldier, and that in itself is a humanizing act.

But I think more than humanizing the soldiers themselves, military science fiction has a role to play in illuminating why we choose war. As with all speculative fiction, the power lies in being able to set up an impossible scenario, and ask concrete questions about it. Government and military can be structured in any way at all, or even be at odds with each other—weapons are, after all, a uniquely dispassionate way of upsetting the balance of power. Add to this a government with complex motives for choosing to deploy their defenses, and you can examine our current society through an infinite number of lenses.

One of the most powerful pieces of military science fiction I’ve ever read is Lois McMaster Bujold’s Shards of Honor—a book in which the military campaign is laid out clearly, even as the rest of the story misdirects us into ignoring it. In that novel, thousands of soldiers die—and those deaths were clearly part of what was likely the only solution to the problem that had developed. The reveal is a brutal moment, because we have come to care about the individuals involved—we know them as people, not archetypes. The message is not at all pro-war, but neither is it explicitly anti. If anything, it makes the reader think: How might they have prevented the need for all of this?

That the question remains unanswered is critical. War is not the enemy so much as thoughtlessness. If we are to risk people’s lives, we have a responsibility to understand exactly what we’re doing. Every single time.

I’ve always felt that fiction’s main responsibility is to be entertaining. That means good character and good conflict, and some form of resolution at the end. But if military science fiction has a purpose beyond that, I believe it’s to make us think about why we perpetuate the long-standing, culture-spanning traditions of military buildup and conflict. Societies fall apart when they start carving off specialized chunks of themselves, taking credit for the good deeds and pointing fingers for the bad. Military science fiction can show us the worst consequences of war on auto-pilot. And it can also make us remember that we’re all people, our soldiers included, and we have the power to do better. 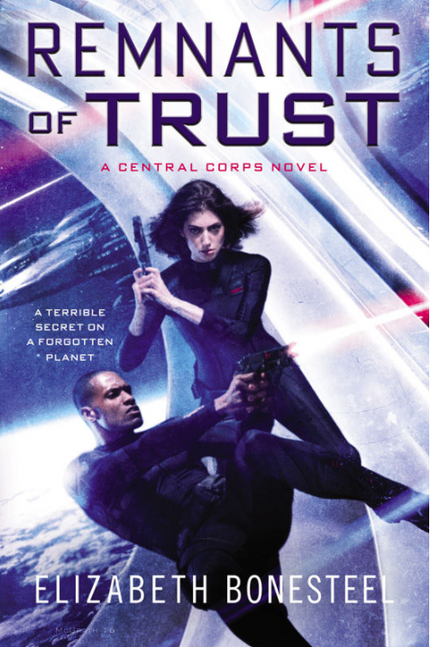 Elizabeth Bonesteel began making up stories at the age of five, in an attempt to battle insomnia. Thanks to a family connection to the space program, she has been reading science fiction since she was a child. She currently lives in central Massachusetts with her husband, her daughter, and various cats.

She is the author of the Central Corps series, which currently contains two military science fiction novels: The Cold Between (#1) and Remnants of Trust (#2).