The Book That Changed How We Think About Chaos

James Gleick's "Chaos: Making a New Science" introduced readers to chaos theory and the butterfly effect, forever changing how we see the world around us.

In 1987, New York Times science writer James Gleick published Chaos: Making a New Science, a nonfiction novel that introduced readers to a new way of thinking about the world. Gleick's seminal text was a New York Times bestseller and a Pulitzer and National Book Award nominee, lauded for making concepts like chaos theory and the butterfly effect accessible to all readers.

The impact of Chaos: Making a New Science can be seen in pop culture (Jurassic Park  might have been very different if Crichton hadn't been inspired by Gleick), and in the novel's enduring popularity.

Thirty years later, Chaos: Making a New Science is still an essential volume for anyone interested in science history or the forces at work in the world around us—and its new enhanced ebook edition features embedded videos and other additional resources for readers.

Read on for an excerpt and download the full book on Amazon, Barnes & Noble, and iTunes. 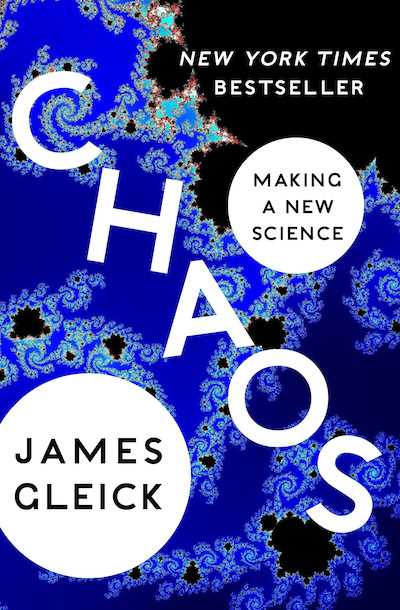 THE POLICE IN THE SMALL TOWN of Los Alamos, New Mexico, worried briefly in 1974 about a man seen prowling in the dark, night after night, the red glow of his cigarette floating along the back streets. He would pace for hours, heading nowhere in the starlight that hammers down through the thin air of the mesas. The police were not the only ones to wonder. At the national laboratory some physicists had learned that their newest colleague was experimenting with twenty-six–hour days, which meant that his waking schedule would slowly roll in and out of phase with theirs. This bordered on strange, even for the Theoretical Division.

In the three decades since J. Robert Oppenheimer chose this unworldly New Mexico landscape for the atomic bomb project, Los Alamos National Laboratory had spread across an expanse of desolate plateau, bringing  thousands of scientists and administrators and technicians. These scientists had experience with brilliance and with eccentricity. They were hard to surprise.

But Mitchell Feigenbaum was an unusual case. He had exactly one published article to his name, and he was working on nothing that seemed to have any particular promise. His hair was a ragged mane, sweeping back from his wide brow in the style of busts of German composers. His eyes were sudden and passionate. When he spoke, always rapidly, he tended to drop articles and pronouns in a vaguely middle European way, even though he was a native of Brooklyn. When he worked, he worked obsessively. When he could not work, he walked and thought, day or night, and night was best of all. The twenty-four–hour day seemed too constraining.

In 1974, though few of his colleagues knew it, Feigenbaum was working on a problem that was deep: chaos.

Want more science books? Sign up for The Portalist’s newsletter, and get our recommended reads delivered straight to your inbox.

Where chaos begins, classical science stops. For as long as the world has had physicists inquiring into the laws of nature, it has suffered a special ignorance about disorder in the atmosphere, in the turbulent sea, in the fluctuations of wildlife populations, in the oscillations of the heart and the brain. The irregular side of nature, the discontinuous and erratic side—these have been puzzles to science, or worse, monstrosities.

But in the 1970s a few scientists in the United States and Europe began to find a way through disorder. They were mathematicians, physicists, biologists, chemists, all seeking connections between different kinds of irregularity. Physiologists found a surprising order in the chaos that develops in the human heart, the prime cause of sudden, unexplained death. Ecologists explored the rise and fall of gypsy moth populations. Economists dug out old stock price data and tried a new kind of analysis. The insights that emerged led directly into the natural world—the shapes of clouds, the paths of lightning, the microscopic intertwining of blood vessels, the galactic clustering of stars.

When Mitchell Feigenbaum began thinking about chaos at Los Alamos, he was one of a handful of scattered scientists, mostly unknown to one another. A mathematician in Berkeley, California, had formed a small group dedicated to creating a new study of “dynamical systems.” A population biologist at Princeton University was about to publish an impassioned plea that all scientists should look at the surprisingly complex behavior lurking in some simple models. A geometer working for IBM was looking for a new word to describe a family of shapes—jagged, tangled, splintered, twisted, fractured—that he considered an organizing principle in nature. A French mathematical physicist had just made the disputatious claim that turbulence in fluids might have something to do with a bizarre, infinitely tangled abstraction that he called a strange attractor.

A decade later, chaos has become a shorthand name for a fast-growing movement that is reshaping the fabric of the scientific establishment. Chaos conferences and chaos journals abound. Government program managers in charge of research money for the military, the Central Intelligence Agency, and the Department of Energy have put ever greater sums into chaos research and set up special bureaucracies to handle the financing. At every major university and every major corporate research center, some theorists ally themselves first with chaos and only second with their nominal specialties. At Los Alamos, a Center for Nonlinear Studies was established to coordinate work on chaos and related problems; similar institutions have appeared on university campuses across the country.

Now that science is looking, chaos seems to be everywhere. A rising column of cigarette smoke breaks into wild swirls. A flag snaps back and forth in the wind. A dripping faucet goes from a steady pattern to a random one. Chaos appears in the behavior of the weather, the behavior of an airplane in flight, the behavior of cars clustering on an expressway, the behavior of oil flowing in underground pipes. No matter what the medium, the behavior obeys the same newly discovered laws. That realization has begun to “change the way business executives make decisions about insurance, the way astronomers look at the solar system, the way political theorists talk about the stresses leading to armed conflict.

Chaos breaks across the lines that separate scientific disciplines. Because it is a science of the global nature of systems, it has brought together thinkers from fields that had been widely separated. “Fifteen years ago, science was heading for a crisis of increasing specialization,” a Navy official in charge of scientific financing remarked to an audience of mathematicians, biologists, physicists, and medical doctors. “Dramatically, that specialization has reversed because of chaos.” Chaos poses problems that defy accepted ways of working in science. It makes strong claims about the universal behavior of complexity. The first chaos theorists, the scientists who set the discipline in motion, shared certain sensibilities. They had an eye for pattern, especially pattern that appeared on different scales at the same time. They had a taste for randomness and complexity, for jagged edges and sudden leaps. Believers in chaos—and they sometimes call themselves believers, or converts, or evangelists—speculate about determinism and free will, about evolution, about the nature of conscious intelligence. They feel that they are “turning back a trend in science toward reductionism, the analysis of systems in terms of their constituent parts: quarks, chromosomes, or neurons. They believe that they are looking for the whole.

As the revolution in chaos runs its course, the best physicists find themselves returning without embarrassment to phenomena on a human scale. They study not just galaxies but clouds. They carry out profitable computer research not just on Crays but on Macintoshes. The premier journals print articles on the strange dynamics of a ball bouncing on a table side by side with articles on quantum physics. The simplest systems are now seen to create extraordinarily difficult problems of predictability. Yet order arises spontaneously in those “systems—chaos and order together. Only a new kind of science could begin to cross the great gulf between knowledge of what one thing does—one water molecule, one cell of heart tissue, one neuron—and what millions of them do.

Watch two bits of foam flowing side by side at the bottom of a waterfall. What can you guess about how close they were at the top? Nothing. As far as standard physics was concerned, God might just as well have taken all those water molecules under the table and shuffled them personally. Traditionally, when physicists saw complex results, they looked for complex causes. When they saw a random relationship between what goes into a system and what comes out, they assumed that they would have to build randomness into any realistic theory, by artificially adding noise or error. The modern study of chaos began with the creeping realization in the 1960s that quite simple mathematical equations could model systems every bit as violent as a waterfall. Tiny differences in input could quickly become overwhelming differences in output—a phenomenon given the name “sensitive dependence on initial conditions.”

In weather, for example, this translates into what is only half-jokingly known as the Butterfly Effect—the notion that a butterfly stirring the air today in Peking can transform storm systems next month in New York. When the explorers of chaos began to think back on the genealogy of their new science, they found many intellectual trails from the past. But one stood out clearly. For the young physicists and mathematicians leading the revolution, a starting point was the Butterfly Effect.”

Want more science books? Sign up for The Portalist’s newsletter, and get our recommended reads delivered straight to your inbox.