Andrew Kessler details the 90 nail-biting, but incredible, days he spent with the Phoenix Mars Mission in 2008.

Just like any other science geek, writer Andrew Kessler is obsessed with Mars. Luckily for him, he got the opportunity to spend 90 days embedded within the Phoenix Mars Mission in 2008—during which the first ever man-made probe was sent to the planet. Their mission? To discover how a wet planet like Earth could potentially end up a red barren desert like Mars. Working with some of the most prominent pioneering scientists in the field, Kessler learned just how delicate, nail-biting, and life-changing space exploration can be.

His gut-wrenching first hand account of the “seven minutes of terror” before the probe’s landing on the surface of Mars is detailed in his gripping book, Martian Summer: My Ninety Days with Interplanetary Pioneers, Temperamental Robots, and NASA’s Phoenix Mars Mission. 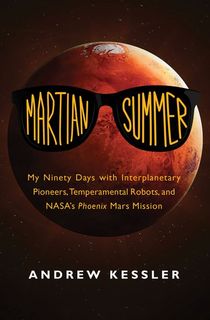 It’s 5:07 A.M. local Tuscon time, 14:22 P.M. on Mars. Suzanne Young and Richard Kornfeld sit at the edge of the conference table in downlink, reviewing the satellite schedules for relaying data. They need to precisely coordinate the timing of Phoenix’s messages back to Earth. Missing a data pass could cause them to lose a day of science.

“Can we go through it once more?” Kornfeld presses Suzanne. The timing doesn’t sit right with him. Suzanne has already done the work and she’s taken him through it.

“Don’t you trust me?” Suzanne asks, gritting her teeth a little.

“I love working with him, but somehow when he’s on duty the shift lasts three hours longer than what’s posted on the schedule,” Suzanne says with a wink. “And be prepared for a lot of pressing questions,” she adds. There’s a method to Kornfeld’s madness. He’s slow but he gets things done right. For those of you who don’t subscribe to Engineer Aficionado or didn’t recognize his voice from the above chat with Suzanne, Kornfeld is the guy who called play-by-play at landing just a few weeks ago. He’s a real engineering celebrity. Now you recognize his Swiss German accent. There’s no mistaking that precision cadence and warm staccato that captured the world’s attention on landing day. He had the whole world hanging on his every word.

I keep the video file on my computer for the moments I need a little boost—beyond the copious amounts of Provigil™ coursing through my veins. It does far more for the psyche. Kornfeld has a gift for engineering-inspired gems. If you’re giving him some long-winded answer during one of his friendly inquiries, he’ll say “I was looking for a binary answer,” meaning “yes” or “no.”

Landing day operations took place at the jet propulsion lab in Pasadena. JPL may be wonky with their press, but they’re awesome at landing spacecraft. They’re really the only game in town. Even the European Space Agency consults with JPL for Mars landings. So they get to enjoy all the glory for that. On landing day, Peter and his landing team were all in Pasadena while we waited back in Tucson. Peter stood in the other Mission Control, the Pasadena-based landing center.

“Ah, sir, you do know that it takes fifteen minutes for the signal to travel to Mars,” Kornfeld would say after a long pause. It’s more fun to imagine Peter yelling at his crew, but landing doesn’t happen like that. It’s all controlled by Phoenix’s computer brain. About a thousand precisely timed events that all rely on one another have to occur in the span of seven minutes. Since it takes about that much time for a signal to even reach Mars, Peter wouldn’t get to say much before the lander was already on the ground in a pile. Supervising the collection of data is all there is to do during landing on a mission like this.

“Landing happened 10 months ago,” Pat Woida said back on landing day. He’s so practical. “There’s no point in being nervous now.” The landing for the most part was a fait accompli after the final instructions were uploaded by the Phoenix engineers. There are several opportunities to adjust the trajectory so Phoenix hits the atmosphere just right, but the last opportunity for a course correction passed hours ago. There’s really nothing left to do but sweat. And in spite of the over-air-conditioned space, I do. Once the landing operations terminate, JPL hands over control to the SOC in Tucson and Peter races back from the JPL campus to re-join the team.

In Tucson, we ate hot dogs and watched a live feed projected onto a massive screen just opposite the PIT. The education and public outreach team hosted a landing-day party for friends and family of the mission. Between pleading with Sara Hammond to let me in the secure area of the SOC, and feeling alone at an amazing party, I’d stuffed my face with wieners and watched the scientists’ husbands, wives, parents, kids, aunts, and uncles make nervous small talk. Then everything got quiet. “Atmospheric entry on my mark,” proclaimed the velvety man voice over the PA. Here we go.

“Five—4—3—2—1. Mark,” Kornfeld counted down. With that, Phoenix dipped into the atmosphere and made its move. I imagined the spacecraft starting its fall: her heat shields deflecting the hot glowing plasma as she plummets through the hazy red atmosphere, beginning a seven-minute super-braking burnout to decelerate from 12,500 mph to zero without any splatter.

Photo: An artist's rendition of the Phoenix Mars probe during landing.

One minute past entry. Still a signal via Odyssey. Standing by for Odyssey data switch to 32K in 45 seconds,” Kornfeld updated his team. The bespectacled Kornfeld is officially the Chief Communication Engineer for entry, descent, and landing. He is responsible for how Phoenix communicates during landing. On previous Mars missions, communication had dropped out as the lander went into its seven-minute fall. These moments of silence are part of Mars landing legend. They’re called the “seven minutes of terror.” They make your mission or your mess. I tried to read an academic paper Kornfeld co-authored that described how it all works. I made it halfway through the synopsis. Kornfeld and his colleagues tried to engineer out the terror from the seven-minute landing sequence. They wanted to at least collect data so if the worst happened they could learn from it. From his wan pallor, you might deduce that terror reduction is a taxing process.

“Standing by for telemetry acquisition … parachute deploy detected,” Kornfeld says. Everyone applauds. That’s a good sign. Phoenix must release its parachute and then blow off its heat shield. The timing has to be perfect for these events. The heat shield has to protect Phoenix from the friction of descent, but then fall far enough away from Phoenix so they don’t make contact at any point along the way.

“Radar switch to altitude mode. Standing by for altitude conversion,” Kornfeld announces. This is a critical moment. We’re still waiting for the radar to lock. If it works, there should be an altitude reading to tell us how far Phoenix is from the surface. If it’s not working, well, you don’t want to know. The radar was a big headache. This is a Polar Lander inherited radar. Yes, the same one that likely caused the Polar Lander to crash. They had to find the problems and then engineer them out. It was a lot harder than they imagined and the radar was still flaky six weeks before launch, making this a particularly tense moment.

A small wave of excitement rushes through the crowd, touching everyone who knows what those steps mean. If they’re excited, I’m excited.

I am a bundle of nerves, frozen with fear, hoping and willing with all my mental power for it to go right. I don’t care that this was all programed months ago. I’m nervous as hell. My fingernails are digging into my palms and even my bum is clenched. Peter’s ten-foot-tall head and wide-eyed, unblinking face is projected on the wall. Peter points his index finger in the air. At first I don’t know what he’s pointing at. But then I see it was the aftermath of a premature count-down. He started with five fingers at 5000 meters but after 2000 meters Kornfeld switches things up on us. We expect him to say 1000 meters. But he wants to draw out the drama and goes 1900 meters. Peter is left with his index finger extended. He’s just frozen. Desperately pointing at nothing, willing with all his will that the spacecraft lands softly.

“Stand by for touchdown …”

You can almost feel the pressure drop from the collective inhale.

Peter picks up the small man next to him in a giant bear hug. They look so happy. We cheer, high-five, and some people even cry. Me? There was just something caught in both my eyes. From a technical perspective, the landing proved flawless. They maintained radio contact during the entire stretch of the “seven minutes of terror.” Much of that was due to Kornfeld’s communication package. But who cares about all that: WE MADE IT TO MARS! 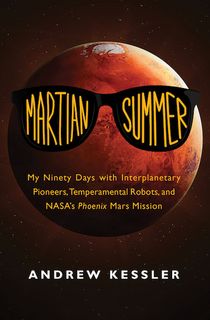