Worlds that once seemed far off in the future have turned into our reality.

Science fiction stories sometimes prove more real than we’d like. Over the years, books that once seemed far-fetched have started to resemble the present. From Ray Bradbury’s Farenheit 451, which is set in a world where books are banned, to George Orwell’s 1984, a book that suddenly topped bestseller lists when President Trump took office this past winter, science fiction authors have a slightly terrifying way of predicting the future.

In Visions of Tomorrow: Science Fiction Predictions That Came True, Tom Easton and Judith Klein-Dial have collected short fiction by some of the greatest science fiction authors, published before the rise of modern technology. One such story tells of a society alarmingly dependent on technology, so much so that they use it to track their companions and efficiently order their food before arriving at a restaurant. Sound familiar?

Read on for an excerpt of Visions of Tomorrow, and then download the book. 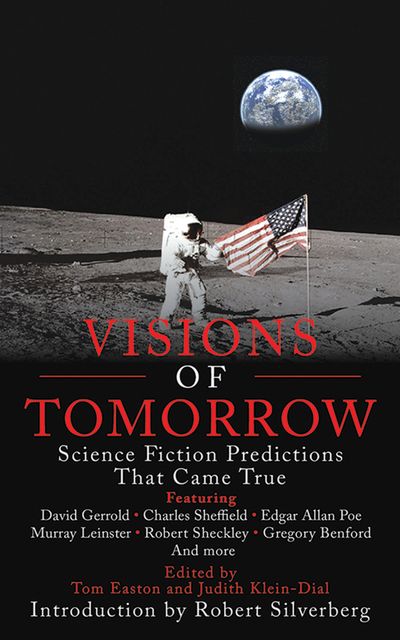 “The Infodict,” by James Van Pelt

Sanji kept a spider on Marlyss constantly, and his Concierge prompted him with updates. As Sanji sold forty cases to the crosstown outlet, it scrolled her location when her car passed under a traffic vid at Divisadero and Pine.

At the moment, he was in his office, deep in his leather chair, feet up, but it wouldn’t matter if he was at home or at the park or on a flight; when the info flowed, he swam in it.

Where’s she going? Sanji called up her travel patterns for the last week, Monday’s for the last month, and every fifth of the month for the year. Numbers rolled through the air between him and his desk, everything he’d gathered on her since they’d started dating a year ago. No match. He OKed the delivery, quick scanned for reservations she might have made or credit blips. Nothing. He red flagged the time for later analysis just as it reported her at Divisadero and Lombard.

“You watching Marlyss again, bud?” said Raymond. “You’re obsessive.” Raymond sat on the edge of Sanji’s desk. As usual his tie didn’t match his shirt, and the suit coat should have been retired years ago. Rather than getting a hair implant, he had combed thin strands over the bald spot. “Where’s your specs? Don’t you work here anymore?”

Sanji minimized the Marlyss profiler, but kept the program running in the background. New numbers showing this afternoon’s inventories, shipments, and condition of the delivery fleet popped up. All in the green. He stood, smoothed the front of his jacket, checked his look in the mirror. Businessman perfect. Just the right part in the hair. A meticulous, trim appearance.

“I get buzzed if there’s a problem.” Raymond pointed to the flesh-colored button in his ear. “I’m just a PR flak. Nonessential paperwork only. Short of a complete emergency, my job could be done by a high school intern.” He shrugged. “Let me take you to lunch.”

Sanji’s own earphone squeaked a high pitched, short-speak message about highway traffic and truck travel time. With a pressure on his desk handplate, Sanji alerted the drivers.

“I’ve got the expense account. I’ll pay.” Sanji put his desk on auto mode, which handled routine calls, rerouted email and forwarded everything to the Concierge, a black, wallet-sized case attached to his belt.

Sanji checked the daily specials at Reefers, a favorite spot for the business crowd, and ordered while they walked. “What do you want?” Above them thin clouds filtered the San Francisco afternoon, softly lighting apartment buildings and trees.

Raymond said, “Don’t you ever turn that thing off? I thought I’d decide when we got there.”

Sanji laughed. They wove through the lines in front of the fast food kiosks. “You’re a positive Luddite. We can have the food waiting, cooked to our specifications, eat, and be out in fifteen minutes. Don’t you know they hate customers like you?”

They turned down a long hill, each step jolting Sanji’s specs as they flashed that Marlyss had used credit to park her car at a lot just off Divisadero and Marina Boulevard. Weather numbers scrolled up: 65 degrees, 86 percent humidity and gusty breezes off the bay. Probably cold as hell. A list of small restaurants and shops within walking appeared, all in historic San Francisco, most without vid security he could tap into. He checked her med monitors. Pulse over 100 and steady. Respiration elevated. She was walking. Blood sugar a little low. Probably going to lunch herself.

But why downtown? Why the change of habit? Did it mean anything about their relationship? He wouldn’t know where she was until she paid for something.

Sanji ran a quick check on her infosystems. As far as he could tell, she hadn’t accessed any data about him since dinner last night. Did that mean she didn’t care?

“Maybe I don’t know what I want yet,” said Raymond

“That’s the point. You could be deciding now. You’re not a very good multitasker.” Other pedestrians walked around them. Most wore specs. Many of them working, sub-vocalizing communiques, their eyes flitting back and forth as they read data.

Raymond looked from building to building. Sanji knew Raymond was interested in restored architecture. Why he didn’t access the info off the Net was beyond him. Raymond actually liked to see the structures.

Sanji wrinkled his brow. It was such a direct question. “Yes, last night.”

They crossed the street and entered Reefers. “Good afternoon, sirs,” said the door as it opened for them. “Your table is ready.”

A line shimmered on the floor leading them into the restaurant. On the walls, outdoor footage of a rock concert surrounded them. The soundtrack was just loud enough to make other patron’s conversations unintelligible.

Sanji said, “She wants to think it over. She’ll tell me tonight. I’m thirty-two. You’d think I wouldn’t be so nervous.”

“Thirty-two and never been married. As far as dating goes, you’re practically a teenager. Thinking it over’s better than a no.” They sat. “Can I get a menu?” Raymond said to the table.

A minute later a waiter, looking miffed, delivered a paper version of the day’s offerings. “Are you new to Reefers, sir? We have a much more attractive electronic display tailor-made for our Concierge customers.”

“You’ll just have to come back, son. I left mine at work,” said Raymond. The waiter’s jaw dropped, and Raymond added, “You must be the new one. I’ve eaten here twice a week for four years.”

The waiter did the peculiar mid-focus, twitchy stare someone got when checking a readout in his specs. “Who are you, sir?”

“Ah, one of those,” said the waiter with a sniff, as if everything was clear now. He stalked away.

“Where do you get cash?” said Sanji.

“If you go to your bank in person, and present identification, it’s still available. Mostly they keep it around for international travelers.”

Sanji shook his head. This was another of Raymond’s oddities. He was so consistently dependable, however, that management had decided he was eccentric rather than weird.

“But why go to the trouble?”