Lou J. Berger re-reads "The Forever War" for the first time since he was a child, and has a very different take on the horrors of war as an adult.

As a student way back in 1979, I vowed to read each and every book in the Glades Junior High School library, under the watchful tutelage of our school librarian, Miss Franklin—a woman with a sparkling smile and calm intelligence shining from her brown eyes. She made gentle suggestions and supervised my journey through her bookshelves.

Being more than a bit OCD, I worked my way down each shelf alphabetically—reading whatever books I found there. When I hit the shelf with authors whose last names began with “H,” I met Joe Haldeman and his brilliant novel, The Forever War.

The story is about futuristic soldiers—a man named Mandella, specifically—who slowly lose focus on why, exactly, they are fighting. Due to the nature of time dilation during relativistic space travel, what takes a year or two in the field translates to decades back home. The people who send them into battle are dead and gone when they return back home.

The more fighting they see, the more tenuous becomes the rationale for fighting in the first place. Eventually, due to nothing more than blind luck and good fortune, Mandella becomes the oldest original soldier from the war that began in 1997. It’s now centuries later, and the only thing that ties him to his own time is his love, Marygay, who fights alongside him and eventually drifts away on her own mission. 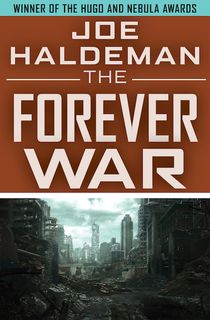 Being 11 years old at the time I first read this, I thought that violence and war were noble pursuits, oblivious to my own eventual mortality. I delighted in joining Mandella while he fought the evil Taurans, with their bubble machines and their neckless bodies, giant heads erupting directly from their chests. The psychological impact of combat on the soldiers didn’t register with me at all; I was anxious to see to the viscera, the bloody stumps, and the detonations of war.

Now I’m 50 and happened to re-read the same book last year—almost 40 years after reading it the first time.

I’m a father of three now, and having children changed my perceptions of life and death—re-allocating my priorities drastically. When you’re 11 years old, death is always meant for the other guy, never for you.

But when you’re 50, death has become a frequent visitor, and fathering children has made that specter a greatly feared foe.

Re-reading The Forever War brought me quite a bit of nostalgia during the scenes I remembered reading the first time around, but with a renewed appreciation for the brilliant novel Haldeman has crafted. With the sharp eye of a combat veteran, he knits a world from the skein of a survivor, showing how the very concept of what it means to be human might shift and flow as the centuries progress.

Want more science fiction? Sign up for The Portalist's newsletter to get out-of-this-world stories delivered straight to your inbox.

Haldeman paints an insightful and biting landscape of what war might mean when it is dissected and examined piecemeal, and I found it loaded with wisdom, clarity, and love.

His work speaks to me, as a father, and perhaps most potently after Mandella sees his first dead Tauran, the desired objective of all their training. He says, “I felt my gorge rising and knew that all the lurid training tapes, all the horrible deaths in training accidents, hadn’t prepared me for this sudden reality … that I had a magic wand that I could point at a life and make it a smoking piece of half-raw meat; I wasn’t a soldier nor ever wanted to be one.”

As a pre-teen, I thrilled at the glory of battle, and I delighted in the gory scenes, feeling the thrum of the futuristic weapons in my own hands, seeing the alien blood splatter across the page as I joyfully followed Mandella along.

As a father, I’m sympathetic to Mandella’s increasing sense of displacement, recognizing the horror of burning down enemy combatants who, from their point of view, are being murdered by rapacious invaders. Specifically, I see the carnage of a taut battle scene as wasteful; it is no longer a source of visceral joy. The slaughtered Taurans, who I now recognize through the lens of a parent, are somebody else’s sons and daughters, no matter how alien they may be to Mandella’s xenophobic eyes.

Haldeman’s deft touch and demonstration of the futility of war in solving political disputes resonates strongly in my adult self, while having been completely oblivious to me as a child.