A lawyer-elf fights to keep a killer off the Naughty List in this short story from a creepy new Christmas collection.

Love the holiday season but wish it were little spookier? If typical Christmas stories like The Night Before Christmas and The Polar Express are too sugarplum-sweet for you then you'll love A Midnight Clear, a new short story anthology celebrating the darkness of December. In winter the nights are longer, trees move indoors, and many people eagerly anticipate a man breaking into their house. In other words, it's a time of year where the lines between the everyday and the strange blur. Usually, the result is merriment—but as the stories in A Midnight Clear explore, when the boundaries between the human world and the world of magic become porous, it can also lead to mayhem.

Featuring stories from Sam Hooker, Alcy Leva, Laura Morrison, Cassondra Windwalker, Dalena Storm, and Seven Jane, A Midnight Clear makes the perfect Christmas gift for the reader in your life who appreciates a touch of ho-ho-horror. Best of all, an ebook is available for $0.99 for one week to celebrate its release!

RELATED: The Geek Gifts You're Looking For: 35 Nerdy Presents You Need

For a preview of the festive chills available in A Midnight Clear, unwrap the excerpt below. In Sam Hooker's story "The Dauntless," Candy Court lawyer Snickerdoodle is horrified when she's asked to defend Gumdrop, a fellow elf charged with the unthinkable crime of murder. Snickerdoodle doesn't believe an elf is capable of killing...but Gumdrop has certainly changed since he made an ill-fated present delivery to a place called R'lyeh. Filled with fun allusions to Lovecraftian lore, Hooker's story highlights the inherent creepiness not only of the world of Cthulhu, but also of the Santa Claus mythology. 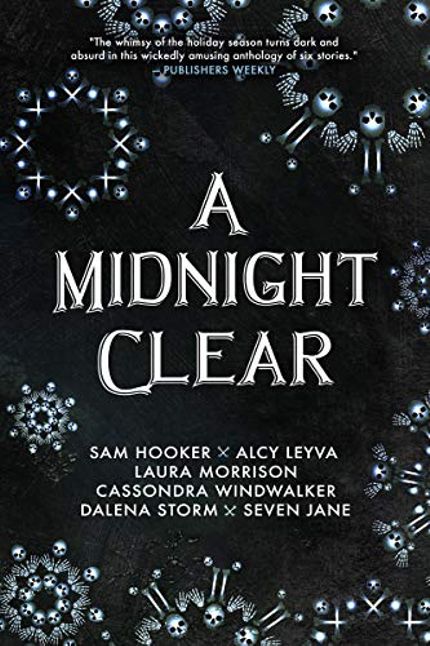 It had been a light day in Candy Court. Then again, they always were. Elves never got into real trouble, much to Sugarsnap’s chagrin. Before Sprinkles, the day’s dockets had included a barista who’d played fast-and-loose with the standard marshmallows-to-cocoa ratio. She’d been sentenced to three afternoons of sleigh bell jingling in the snow angel garden. The docket before that had been a Failure to Whistle While Working case that got dismissed. Sugarsnap had pushed for five years of shoes without curled toes, but Snickerdoodle had proven–beyond a shadow of a doubt–that Candyfloss had been on a mandatory giggle break at the time.

“Just you try whistling and giggling at the same time,” Snickerdoodle had said to the court. “It would be delightful, no doubt. But it simply isn’t possible.”

One docket left, Snickerdoodle thought to herself as she looked at the lone folder on the judge’s bench. It was significantly thicker than average, which was exciting. It usually meant that some new carols would be entered into evidence, and the whole Candy Court would get to sing them.

Want more fantasy reads? Sign up to get the best in sci-fi and fantasy books sent straight to your inbox!

“Sustained! You’ll watch your mouth in my court, counselor.”

“Sorry,” Sugarsnap sneered. From the way he rolled his eyes, Snickerdoodle got the impression that he wasn’t sorry at all.

“Thank you, Bailiff,” said Judge Fuzzybean. “And how does the–wait, what?”

Fuzzybean, Sugarsnap, and Snickerdoodle all stared down at their copies of the file to see what word Poundcake had mistaken for “murders,” only to find that that wasn’t the one he’d gotten wrong. The name of the case was “The R’lyeh Delivery Murders.” For once, no one questioned how Pound-cake had misread a word. Snickerdoodle couldn’t begin to guess how one would pronounce “R’lyeh.”

Before she could ask for clarification, a blood-curdling scream ripped through the courtroom from just beyond the bailiff’s door.

“What was that?” gasped Fuzzybean.

“I think it was Gumdrop,” said Poundcake.

“My client?” This was a lot for Snickerdoodle to take in. Why was he screaming? What was delivered to R’lyeh–how-ever that was pronounced–and was it too much to hope that it was several bowls of ice cream that had been murdered?

“Wait a minute,” said Fuzzybean, “Gumdrop’s not even in here! Bailiff, please escort the defendant to his seat.”

“All right,” Poundcake warbled in a foreboding sort of sing-songy “you’re not going to like it” way.

A pleasant disposition goes a long way in all facets of elf-ish life, and staying off the Naughty List was a big motivator. To that end, most defendants opted to skip from Poundcake’s door to their seats. A few have tried whistling as well, though Fuzzybean frowns on that. He says whistlers don’t take Candy Court seriously enough.

Gumdrop didn’t whistle. He didn’t skip. He didn’t even wear a happy-and-you-know-it grin. His arms were all bound up in an odd shirt with belts on. Snickerdoodle had never seen anything like it.

But that wasn’t the worst part. It was his eyes. Where elves almost always have a gleam or a twinkle, Gumdrop’s gaze was bleak, teetering on the edge of fear. Lack of sleep had weathered his face, his once ruddy complexion now pale and wan. He shuffled listlessly as Poundcake guided him to his chair.

Snickerdoodle was having trouble grasping the enormity of the case. “I’d like to request a recess, Your Honor.”

“Recess is after lunch,” said Fuzzybean.

“No, I mean I need a moment to confer with my client.”

“I agree,” Sugarsnap retorted, “all the reason to avoid adding any more irregularity.”

“None of us have ever tried a murder, counselor,” said Fuzzybean, whispering the frightful word. “Let’s stick to what we know, shall we?”

Snickerdoodle was speechless. At her core, she was a holly jolly elf who wanted nothing more than to get along with everyone, smile, drink cocoa, and have a snowball fight that ended in giggle fits. But this didn’t sit well with her. Some rugged individualist within her thought what Fuzzybean said was a load of coal, and wanted no part of it.

But elves didn’t do rugged individualism. It wasn’t a rule or anything, it just didn’t occur to them. That made Snickerdoodle uncomfortable. She’d never asked for individualism to go occurring, all willy-nilly, in her head. She made a mental note to be on the lookout for any more wanton occurrences.

Fuzzybean moved on to reading the charges. Gumdrop was one of six elves assigned to deliver Christmas to a place called R’lyeh–no one could agree on a proper pronunciation–while Santa was delivering it to the rest of the world. They’d departed in a submarine called the Dauntless at the beginning of December, and when the craft returned at the end of January, Gumdrop was the only member of the crew still alive.

He was festooned in the entrails of his comrades, surrounded by their bloody corpses. All of them bore the same wide-eyed visages of terror as Gumdrop, though they weren’t shrieking like mad.

“He was screaming something over and over when they pulled him out of the Dauntless,” said Fuzzybean as he rifled through the papers in front of him. “Can anyone find the transcription?”

“That’s the one,” said Fuzzybean. “And I suppose that clears up the pronunciation of R’lyeh. The court will hear opening arguments from the prosecution.”

This anthology of creepy Christmas stories is the perfect antidote to holiday burnout. From Hooker's Lovecraftian take on the North Pole, to an unsettling tale of a deceased roommate’s holiday haunting, A Midnight Clear is a chilling collection. Whether you’re giving it as a gift to someone else or to yourself, these dark fantasies will delight readers who know the holidays can be hell—literally.

This post is sponsored by Black Spot Books. Thank you for supporting our partners, who make it possible for The Portalist to continue publishing the fantasy stories you love.