The second book in the Renegades series, Archenemies, picks up where Renegades left off. 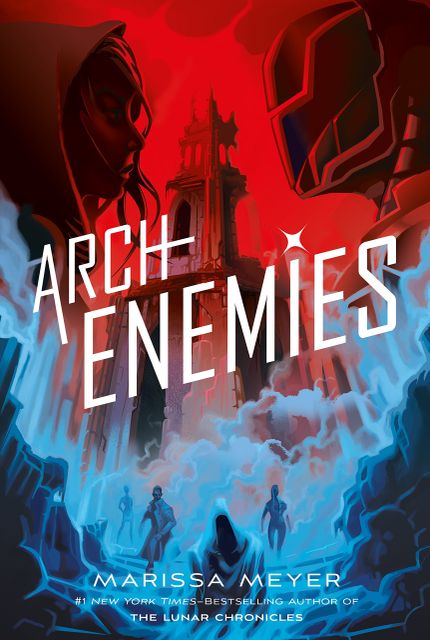 The Renegades series, while it’s still rooted in sci-fi and fantasy, is a bit of a departure from what you’ve done with The Lunar Chronicles and Heartless, which are loose fairy tale retellings. What made you want to venture into the world of teen superheroes?

Well, for me it felt like a really natural transition. In all of my books, one of the things they all have in common is that they’re based on things I really love. So with The Lunar Chronicles, I love science fiction, I love fairy tales and have since I was a kid. With Heartless, I love villain stories, I love Alice in Wonderland. And I love superheroes. I have always been in love with them since I first discovered my big brother’s X-Men comics when we were kids, and so superheroes—and kind of the fantasy of superheroes and having super powers—is something that’s been with me for a long time. So when I had this idea of a story in which a villain and a hero fall in love with each other, I immediately got really excited about it.

I was actually at your Fierce Reads panel at New York Comic Con, and I remember that you saw a sign that you thought said “Superhero School” on it—can you tell our readers about that moment?

So I was on book tour, this was many years ago, and we were on our way to our next signing, and I’m sitting in the back of this car and we drove by a construction zone. And there was a fence around the construction zone, with one of those huge signs that said “Coming Soon to This Location,” and I just got a glimpse of it out of the corner of my eye, and I thought the sign said, “Coming Soon to This Location: Hero School.” And I got so excited, and kind of leaned forward and did a double take: “What did that say?!” And of course it said something completely different that had nothing to do with heroes or schools, but my mind was already running off into different directions. I started to think: “Oh, that’d be so cool if there was a school for superheroes—how much fun would that be?” But that very quickly led to: “If there’s a school for superheroes, then there’s probably a school for supervillains. And they would be huge rivals, and have this really intense age-old rivalry.” And then I thought, “What if a girl from one school fell in love with a boy from another school without realizing that they were supposed to be these terrible rivals?” And that seed of the idea started to grow into what would later become Renegades. 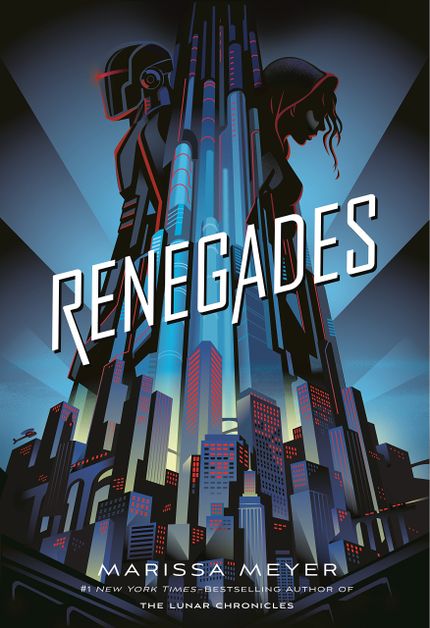 And I’m sure [you were wondering]: “How do I go to a superhero school? Are they taking applications?”

Exactly—it’s very much a Hogwarts-esque fantasy. It’s funny, but [when] I actually wrote Renegades, I tried like three or four drafts of the book in which there were these schools—a school for superheroes and a school for supervillains. I so loved that concept and really wanted to get that into the book. But ultimately it ended up not working, and the whole school factor was taken out of the equation, but it was hard to let go because who doesn’t want to go to a school for super [heroes and] villains?

The story has to do with Adrian and Nova, and they have these alter-egos Nightmare and Sketch, but they also have these other alter-egos, Insomnia and the Sentinel. With all of that information, how does this already-complicated situation progress in Archenemies?

It is complicated! In Archenemies, we see the story continue. A little bit of time has passed since Renegades, but not much. Nova has now infiltrated the Renegades under this second alter-ego, and is pretending to be a Renegade while ultimately trying to find a way to take them down. But both her and Adrian throughout the book are feeling continuously torn in these various loyalties—to each other, to their families, to their own personal morals—and what they think is best for the world, and what they think is best for the city. So you see a lot of internal fighting with themselves, and also tensions are raised between them and all of their allies. That continues throughout the story, and of course it will ultimately result in [an] epic battle.

What is your favorite part about writing a superhero story? I know you said that you were drawn in by the superhero school, but after you figured out how it was going to go, what did you like the most about writing it?

Oh gosh, there have been a lot of things that have been so much fun in writing this story. Of course, writing super powers and coming up with super powers and then being able to see how those powers translate into various situations, both in writing these big battle scenes with explosions and fire and all these powers going back and forth—that’s always really exciting. I always feel a little bit like I’m seeing it play out in my mind as a movie, and trying to capture that cinematic vibe that so many great Hollywood superhero movies have. Especially in Archenemies, we delve deeper into the history of prodigies. And at one point in the story, Nova starts working in what’s called The Vault, which is where the Renegades keep all of their super-powered weapons and artifacts that have been collected over the years, and I loved coming up with all of that stuff, and getting to draw on influences from the world of superheroes—Marvel and DC have so many great objects and items that come with these amazing abilities, so it was really fun for me to take inspiration from that and get to build my own library of superhero objects.

Apart from Adrian and Nova, did you have any other favorite characters to write?

There are a lot of characters in this story that I really enjoyed writing. If I had to pick one, I’d say Honey. She’s over the top, melodramatic, very wicked, but still charming and seductive at the same time. I just love every scene she’s in, she’s really fun to play around with.

In this world you’ve created, prodigies all started as villains before Ace Anarchy rebelled against the government, and then the Renegades stepped in to stop the Anarchists. But what inspired you to call the heroes “Renegades” and the villains “Anarchists”?

So Anarchists is really easy: When I was first brainstorming ideas for the series, and I knew I needed to have this classic supervillain character that kind of all the heroes have been poised against, the first name that popped into my head was Ace Anarchy, which I thought sounded so awesome. So then the Anarchists as being his followers sort of grew naturally out of that. But then I had to start thinking, “Why is he called Ace Anarchy and why are they the Anarchists?” So I had to do lots of research about anarchy and anarchism, and the political beliefs behind it, which ended up being fascinating. As for the Renegades, in a really early draft of the book, [things] had changed and ultimately turned into a world where the Renegades are in power, but I still loved the idea that back in the day when they were still the underdogs they had this reputation of being the vigilantes who were trying to stop the villains and save the world. So, I kept the Renegades name because I felt that it perfectly encapsulated that rebel vibe they had to begin with.

Absolutely, and I think the story in general inspires a debate about what it mean to be a hero vs. a villain, and how much of that can be based on perception. Adrian and Nova have such different perceptions based on their own personal experiences. Do you think some of that has influenced Nova’s internal conflict about it, and why she views the Renegades as villains?

Definitely. When I’m writing the characters, I’m always trying to think about who this character is and what is their background, what they’ve been taught, and what has influenced their beliefs, and really try to make it believable as to who they are now and what is motivating them. Nova was a complicated one because I wanted her to be a villain—she very much buys into what the anarchists are trying to achieve. But at the same time, you don’t want her to be so villainous that the readers can’t root for her. We have to have someone who we can empathize with, connect with, and make sure she’s a character readers can get behind.