Arno Waltiri's music is literally out of this world.

Heroes in fantasy literature are often accidentally transported to other worlds, but rarely are those worlds as harsh or as complex as the land in Greg Bear's The Infinity Concerto. Book one of the two-book Songs of Earth and Power series follows Michael, a 16-year-old poet who arrives in a mysterious, dangerous world after listening to a piece of music composed by Arno Waltiri, a deceased friend of Michael's father. Homesick and at a loss, Michael must seek the help of the mythical Crane Women if he is to survive in this new land.

Look below for an audio excerpt from The Infinity Concerto, brought to you by our partners at Sage & Savant.

RELATED: The One-of-a-Kind Greg Bear Book Bundle Every Fan Must Own

Imagine a song that can remake the world. Such is the case with Concerto Opus 45: "Infinity." Composed by Arno Waltit in 1939, the Concerto, played only once, turns out to be a "Song of Power," and it causes dozens of people from the same performance to simply disappear.

In the present day, a young poet named Michael Perrin finds himself in a different world where Songs of Power have originated. Through a journey full of interesting characters and challenges, Michael realizes that he's been sent to the different realm to complete the Song of Power. But who can he trust in the unknown world, and will he ever be able to return home?

Don't worry, the clip below is just for the book, not the Concerto, and we're pretty sure you'll be staying in this world while you listen. 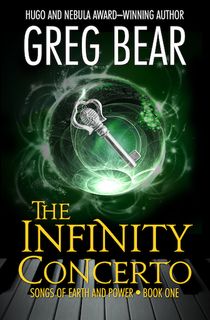 About Sage & Savant: The Adventures of Sage and Savant podcast is the continuing story of Dr. Petronella Sage and her friend Professor Erasmus Savant. Set in the Victorian era, Dr. Sage accidentally discovers a method of time travel. Sage & Savant blends modern scientific knowledge to make the story plausible; historical research to ensure periods of history are represented in the right light; and Victorian era-hubris to give their characters that air of turn-of-the-century invincibility as Sage and Savant embark on incredible adventures through time. Listen to their story on iTunes, GooglePlay, or any podcast app, and visit their website to learn more about the research that goes into making each episode.